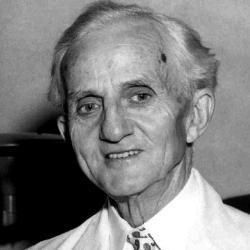 On Sept. 11, 1954, Edward Woodhouse began his service as director of Coastal Carolina Junior College, taking the helm just nine days prior to the first day of classes on Sept. 20, 1954. His one-year appointment included duties as director as well as "teaching 15 semester hours each term" in French, political science and public speaking.

With his wife Margaret, who taught world history and English, the Woodhouses became the first full-time faculty of the new college – each earning $4,500 for the 1954-1955 academic year. In fall 1955, he was named academic director when George Rogers was hired as administrative director, dividing the academic and administrative functions of the college. He continued teaching through the summer term of 1958.

Woodhouse graduated from Randolph-Macon College in 1903 and was awarded a law degree from the University of Virginia in 1905. In addition, he studied history at the graduate level at Wisconsin and Chicago universities, and taught history at Richmond and Yale universities. Following his service as an officer in World War II, he taught at Smith College. He was a professor of politics and law at the University of North Carolina from 1925 until his retirement in 1954. An active Democrat, he was elected mayor of Northampton, Mass., in 1923.

When Edward Woodhouse died in 1962, the original founders passed a resolution honoring his “invaluable service.” Margaret Woodhouse, who held a master's degree from Duke University and a Ph.D. in history from the University of North Carolina, had a distinguished career teaching history at Radford University; she died in 1998.