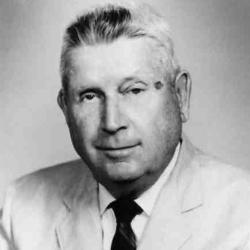 As the new college sought sponsorship from an established university in South Carolina, it was George Grice, president of the College of Charleston, who agreed to oversee the school for a period of not more than three years. Coastal Carolina Junior College was an off-campus branch of the College of Charleston from 1954 through June 1958. In the summer of 1955 Grice dispatched his recently retired colleague George Rogers to Conway to direct operations.

Rogers was director when the college’s first five graduates were awarded associate’s degrees on May 27, 1959. When he announced his retirement in 1960, the college was soon to become USC Coastal Carolina College, beginning a 33-year relationship with the University of South Carolina.

Prior to his appointment at Coastal, Rogers had a distinguished career in education: he served as superintendent of the public school system in Charleston, S.C., for 10 years, as principal of an elementary school and a high school for girls, and taught history and coached high school football. In addition, Rogers was the sixth head football coach for the Citadel and coached the Bulldogs in various capacities for 20 years.

He earned a bachelor’s degree from the Citadel in 1910 and a master’s degree in education in 1928. He later served as an adjunct professor in education at the College of Charleston for 20 years.

He was awarded the honorary degree LL.D. (Doctor of Laws) from the Citadel in 1955 and was posthumously inducted into the Citadel Hall of Fame in 1979.