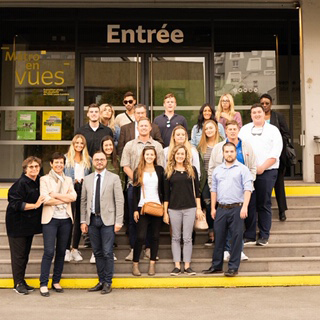 On Friday, May 17, the Grand Paris Corporation welcomed a group of Coastal Carolina University students at La Fabrique du Métro (the Metro Factory) in Saint-Ouen in the northern suburbs of Paris. The visit was coordinated by Léo Attias, president of FIABCI-France, and CCU’s Grant Center for Real Estate and Economics, which was founded in 2016 and named after FIABCI’s honorary world president, Tony Grant, and his wife, Carrie, who now live in South Carolina.

Attias hosted CCU’s education abroad students on a tour to view the latest engineering and architectural design concepts being tested for use in Europe’s largest transport project, Grand Paris Express, the first international collaboration of its kind.

Through the latest digital devices, computer-generated images, videos and models, students were shown a massive scale of the Grand Paris Express project, which is now under construction and scheduled for completion in 2030. This group of new, fully automated rapid-transit lines will transform rail travel in and around the French capital.

It will include 68 new interconnected stations and 200 kilometers of new railway. Ninety percent of the system will be built underground and will have the capacity to transport 2 million commuters daily. It is expected to cost between $39 billion to $45 billion.

“We’re pleased to welcome students from one of FIABCI’s academic member universities in the U.S.,” said Attias. “They received a fascinating presentation at the Metro Factory and gained an understanding of how the Grand Paris Express will have a huge impact on our regional and national economy over the next decade and beyond.”

The Wall College of Business is one of the leading business schools in the southeastern United States with more than 2,000 undergraduate students across six degree programs, 90 graduate (MBA and M.Acc.) students and more than 8,000 alumni around the world.

CCU is an academic member of FIABCI, the International Real Estate Federation, which provides access and opportunity for real estate professionals interested in gaining knowledge, sharing information and conducting international business with each other.