The month of May 2018 marked a voyage of scientific exploration for two Coastal Carolina University students, Elana Ames and Alec Villafana, who were part of a four-week research cruise off the coast of Brazil. They participated in a study on nitrogen fixation near the mouth of the Amazon River, funded jointly by Georgia Tech and the National Science Foundation.

Elana Ames, a graduate student in CCU’s coastal marine and wetland studies program, focused on analyzing water samples for unique isotope traces in the photoplankton located in the “plume,” the area where the Amazon pours freshwater into the Atlantic. The goal of the project is to better understand the chemical phenomenon called nitrogen fixation, whereby nitrogen in the atmosphere is converted to other organic compounds that promote plant production.

Alec Villafana, a junior marine science major, assisted Ames and the crew and documented the research process, producing an informative and entertaining blog of the journey from the research vessel Endeavor, which he updated several times a week on coastal.edu/coastal-now/amazonadventure.

These are highlights from his record of an amazing May! 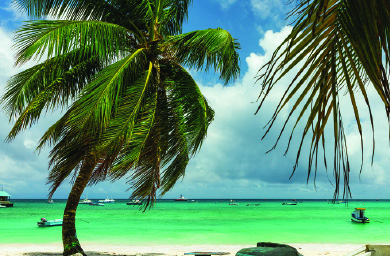 After leaving at 7 a.m. from Myrtle Beach International Airport, we finally arrived to our hotel in Barbados at 11:30 p.m. We decided to take a trip into downtown, where I purchased a fish sandwich from a road vendor.

I did not make it to bed until 3 a.m. (which is a normal bedtime for the locals). 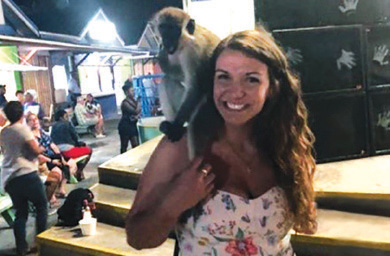 Once we dropped our bags off at the ship, we headed to Oistins, where there was a fish fry festival going on. The spot was crazy! There were people dancing, blasting music, playing instruments and walking around with monkeys on their back. Elana and I each had the flying fish, which was delicious, but it was the fried red snapper that took the prize. After a long day/night of fun, we made our way back to the ship. 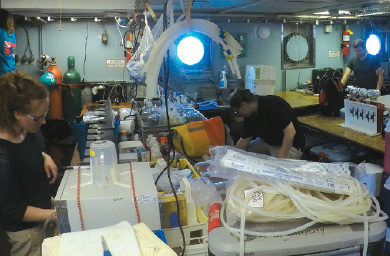 SET-UP DAY! After a long, hot, sweaty sleep, I woke up at 8 a.m. The ship was full of people setting up, which looked to be hours of work. I made my way to the lab to help set up our RaDeCC [Radium Delayed Coincidence Counter] machine, which counts the radium isotopes in the water. Because radium has a known decay rate, it allows us to predict the “age” of the water it resides in. 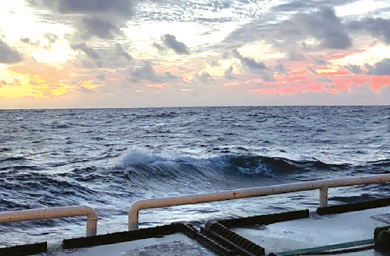 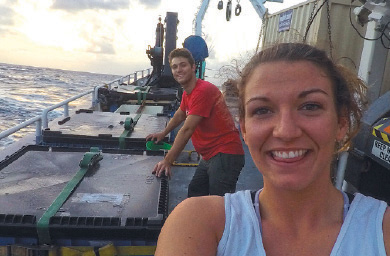 DAY ONE.
What started off as a smooth trip quickly became a never-ending roller coaster. [Many] of the scientists on board have been plagued with seasickness. I was the first one to vomit. Since we left, about five of us have been walking around with little green buckets that [chief scientist] Joe Montoya of Georgia Tech gave us.

We are heading to the center of the plume. Our first stop will be when we exit Bajan waters and enter international waters. We will perform a “shakedown cast” to see exactly how the CTD (conductivity temperature depth) works. Until then, you can find me in bed with my little green bucket. 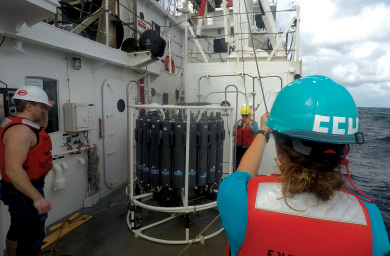 We made our first stop at 1300 as we entered international waters, where we dropped the CTD. The CTD will allow us to collect water samples at any depth and give us a conductivity, temperature, depth and salinity reading as it descends. Elana and I will be using these water samples as data. 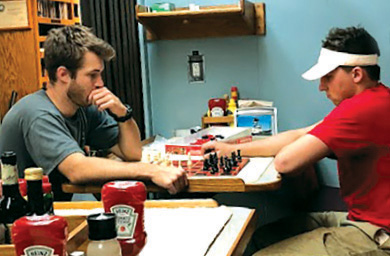 Today, I woke up in time for breakfast at 0730, and started my day with some nice acidic food for the first time. We are currently in transit to station three. Each stop counts as a station. While in transit, Elana and I have been targeting to take underway samples every hour. An underway sample is [taken] from a tube under the boat as we move. 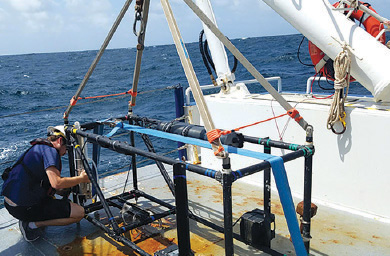 We have been rocking back and forth at station three since about 1400 yesterday. Worked till 0300 last night. The salinity is hovering around 32 psu, which is relatively “fresh.” This tells us we are within the freshwater plume. I was responsible with helping Justin Blancher deploy his snow cam, which tells us where particulate matter is within the water column. Justin is a graduate student at the University of Southern Mississippi. 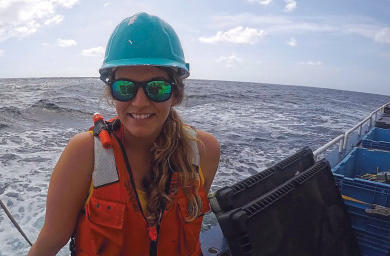 We have entered French Guyana waters and are exiting the plume. We had a couple of brief stops again to deploy three CTD casts and a ring net cast. We have recently found out that we will see land in the coming days. My day ended with the graveyard shift for sampling. 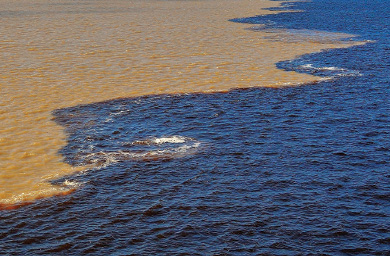 THE PLUME IS AMONG US.
The water has turned from a clear oceanic blue color to a turbid, green color. The salinity has dramatically decreased, and we are about 4 degrees from the equator. It is safe to say that we have found the core of the plume. Our data has dramatically spiked, and we are happy with the results so far.

We are about 10-15 nautical miles from the French Guyana coast but have yet to [see land].

A package was delivered to us by a small boat. We all gathered around the bridge to watch as if we had found life on another planet." - Alec Villafina 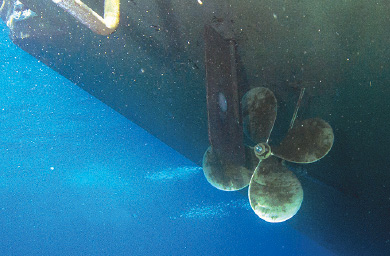 While pulling the sediment trap in this morning, the rope got caught in the propeller. Justin sent a GoPro down into the water to get a clearer image of the problem. It was cool seeing the crew and scientists work together to resolve the issue. We were able to shake loose the floats and clear the propeller. We are happy that everything is now back to normal. 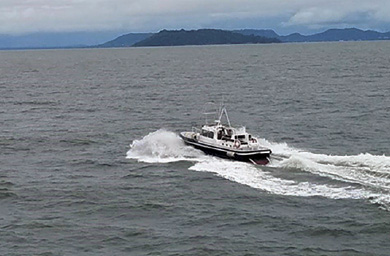 LAND HO! A package was delivered to us by a small boat. We all gathered around the bridge to watch as if we had found life on another planet. There is something really nice about seeing a new face when you’ve seen the same 30 people every day, all day. We are now transiting out of plume water and into oceanic water where we can get contrast samples. 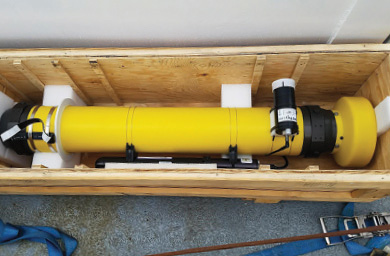 We are en route to retrieve Professor Ajit Subramaniam’s equipment, the BONO (Biogeo-chemical Oceanographic Nitrate Observer), from the ocean. Ajit is a microbial oceanographer at Lamont Doherty Earth Observatory of Columbia University. He is trying to understand what type of phytoplankton are found in different places and why they grow there.

I have learned so much, and I wouldn't trade this experience for anything." - Alec Villafinna 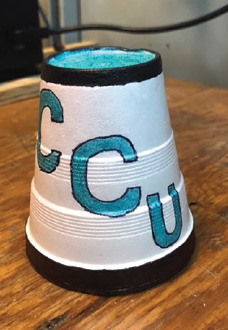 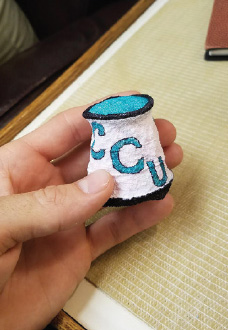 FEELING THE PRESSURE. We are now transiting to our next station, where we will send a CTD 1,900 meters deep. Everyone has been working on coloring in a Styrofoam cup to send down with CTD. The pressure will crush the cup into a miniature version of itself. Elana even designed a CCU cup. 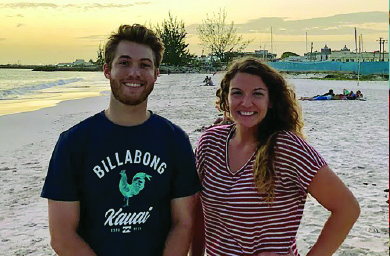 Once we arrived in Barbados for a quick tune up, no one could wait to get off the ship. We were cleared by customs around 1100 and by the captain after lunch. Me being the millennial that I am, I immediately got to a good Wi-Fi spot and updated myself with the outside world. Tomorrow, science will begin again! 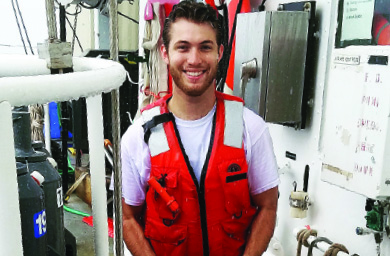 We are currently transiting east toward older plume water. We hope to find Diatom Diazotroph Association (DDA) blooms in these locations. DDAs have been used to understand the anomalous feature of the Amazon River plume. The plume acts as a sink for carbon when most river plumes act as a source for carbon entering the ocean. DDAs are composed of diatoms with cyanobacteria living within them. Cyanobacteria fix nitrogen from N2 to biologically accessible nitrogen, which increases the limiting nitrogen for diatoms. This in turn will decrease the flux of carbon down the water column because of more photosynthesis. 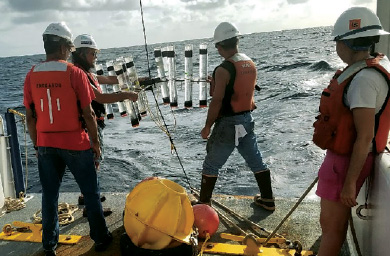 At Station 31, we deployed a sediment trap to gather organic mass in older plume water. We loaded multiple tubes with high saline waters (very dense compared to the oceanic water) to create a brine effect. When the tubes enter the water, the denser water will not mix with oceanic water and will remain in the tubes. Any organic matter floating over the tubes will be trapped in the dense water. 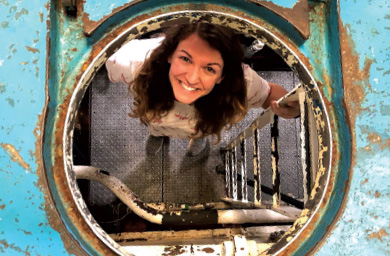 Happy 23rd birthday, Elana! We started the day off with a couple of CTD casts and ended the day with a 2000m cast. In between, we recovered the Mocness [a high- tech sampling net], which traps zooplankton of various sizes. We are now transiting to our final station. Some of the crew joined in to wish Elana a happy birthday after dinner by singing and playing the accordion. 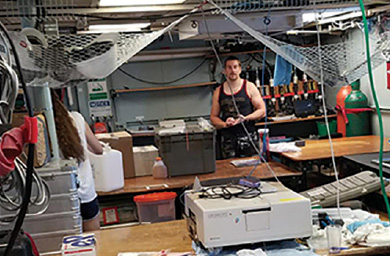 Cleaning and organizing today as we try and complete everything before port. We did not finish packing “everything” until after dinner. At 1900 we had a science meeting, where Joe gave out fun superlatives. By no surprise, my name was Alec “I’m Blogging” Villafana. At around 0030, the RaDeCC finally finished our last samples. We will pack it all up tomorrow morning. 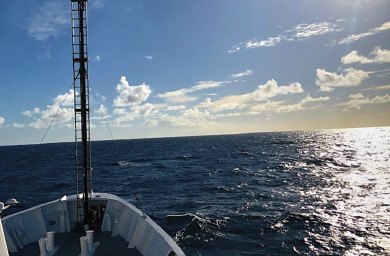 I can’t believe it is over. My original guess for CTD casts was 40, but it turns out we did 67 casts! Elana and I recorded 240 samples while out here. I have learned so much, and I wouldn’t trade this experience for anything. I am excited to get off the ship and go have a day of fun in Puerto Rico, but I will miss everyone on board. For everyone involved in making this happen, I am truly grateful!

The Amazon wasn’t the only world destination that hosted CCU students and professors for amazing learning experiences this past May. CCU also offers an extensive program of “Maymester” study abroad courses. Maymester is the name for the short term that directly follows the spring semester.

Maymester trips are organized through CCU’s Center for Global Engagement. In addition to Maymester courses, study abroad programs are also offered during Wintermester (the period between fall and spring semesters) and Spring Break.