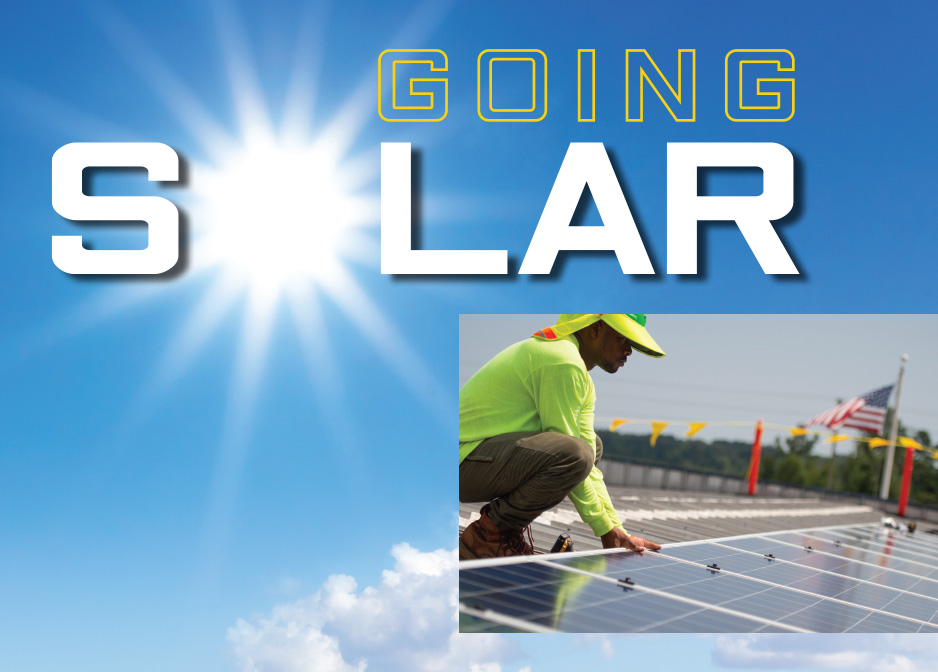 CCU student Solar Ambassadors are lighting the way to a more sustainable future. 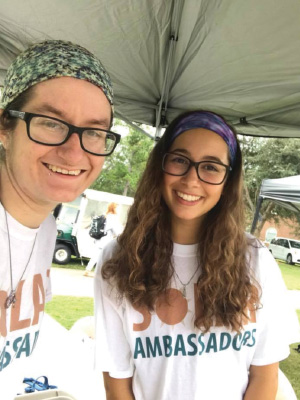 The process of growth is a cyclical one, whether it’s a plant’s life cycle or one person’s inspiration that blossoms into something that inspires many. Regardless of its form or its progression, growth doesn’t happen alone, and, in the case of the Solar Ambassador program at Coastal Carolina University, it starts with a little sunshine.

The Solar Ambassador program launched at CCU in 2015, but the seed was planted earlier. The faculty member behind the program, Pamela Martin, came to Coastal in 1999 with a focus on energy, sustainable development and environmental politics. Part of her research has been focused on fossil fuels and oil extraction, specifically in the Amazon and on the Galapagos Islands, but a project she developed with CCU’s Athenaeum Press shifted her trajectory.

In 2014, the Press, CCU’s student-run publishing lab, took on a project titled Powering a New South, which involved interviewing individuals in the local community to find sustainable solutions to current energy problems. Martin joined Alli Crandell, the director of digital initiatives in the Edwards College of Humanities and Fine Arts, and a team of more than a dozen students to study the possibilities that renewable resources could bring to the region. 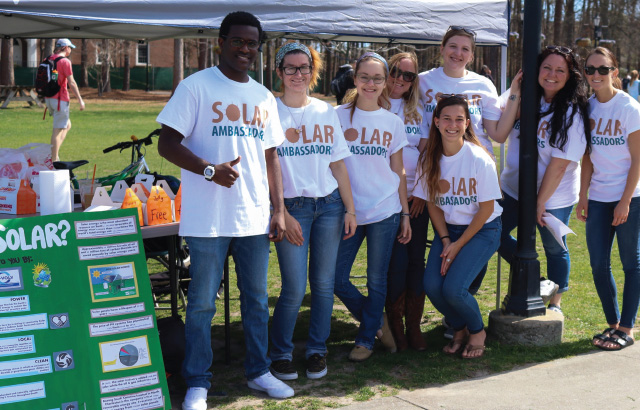 The Solar Ambassador program at Coastal became our chance to really make a difference in this community.”  - Cassandra Ratliff

Many people living along the Carolina coastline were excited and optimistic about renewable energy around that time; Act 236, the Distributed Energy Resource Program Act, had recently been signed into law in South Carolina. This act authorized solar leasing, established guidelines for net energy metering, and provided incentives to utilities that procure renewable energy. Since the act became law, the number of solar installations in the state has increased by 1,600 percent, according to solar.sc.gov.

During their interviews, however, Martin and the students heard troubling stories about how inaccessible renewable energy was to people in low-income communities.

One of those stories, from a CCU student, has stuck with Martin ever since. After the student’s father passed away, keeping the family afloat fell on his shoulders, and he struggled to maintain his schoolwork and keep the lights on at home.

“Having your lights turned off, it’s the worst thing because you have to wash in cold water and you have to use candles at night time to see, and you can’t do any schoolwork ‘cause there’s no power and it just cut you off from everything, [even] basic necessities like cooking,” Brandon Haynes said during his interview with the Press. “I had to cook on the little gas burner hot plate. It was just tough. You can’t imagine just living in a house two or three weeks with no lights.”

While CCU has its own team, we are supposed to support all the teams and work together. That’s how we spread solar to nonprofits across the U.S.” - Pam Martin

Martin felt inspired to do something more. A colleague told her about a college program run by the solar seed nonprofit organization RE-volv in San Francisco, Calif., and she decided to send out an email to the entire student body in 2015 to gauge interest in a solar project at CCU. It was a calculated risk: Admission to RE-volv’s solar ambassador program is via a competitive application process, one the students themselves would have to complete. Acceptance was far from guaranteed.

“Ten students responded to that one email,” she said. “Ten students showed up to the first meeting. And 10 students became the first cohort of Solar Ambassadors at Coastal Carolina University.”

CCU soon became one of seven universities in the nation—and the only one in the South at that time—to be accepted into the program.

“We have a unique situation as a public, comprehensive university, and we did not come to this project with massive quantities of funding,” said Martin. “This program at CCU is solely based on student initiative and RE-volv support.”

The Solar Ambassador program demands a high level of commitment. The full-year, six-credit program requires a minimum of one hour of work outside the classroom weekly. Martin said it’s about as hands-on as a class can get.

“Through that research, I quickly learned that solar energy would significantly increase the quality of life of all, especially those who could not afford it,” Ratliff said. “The Solar Ambassador program at Coastal became our chance to really make a difference in this community.”

Sweeney was originally a marine science major uncertain of what direction she wanted to take. She saw the Solar Ambassador program as an opportunity to try something new and perhaps find a sense of objective. 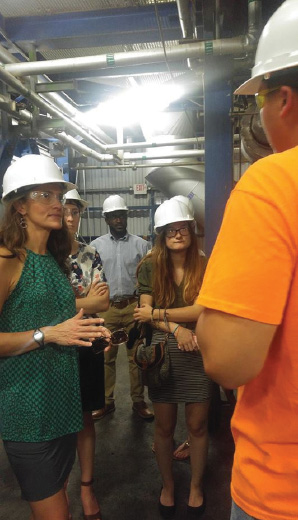 Solar Utopia: In December 2016, CCU professor Pam Martin (left) and the Solar Ambassadors visited the solar power installation at Kauai, Hawaii, and met with representatives there about plans to operate totally on renewable energy by 2045.

“Through working with the Solar Ambassadors, I have an internship with the United Nations Youth Corps, and it’s helped guide me in the direction of sustainability,” she said. “I have a job with a solar company now. I want to go into education to guide others toward sustainable development. It’s the way we have to move if we’re going to preserve the way we live.”

Ratliff and Sweeney both work in the marketing department at Carolina Energy Conservation, a local solar company. As Solar Ambassadors, they were able to get hands-on experience in every aspect of the solar industry, from policy and research to marketing and installations.

The centerpoint of the partnership with RE-volv requires the Solar Ambassador teams to commit to finding a nonprofit that is interested in having solar panels installed on its facility and seeing the entire process through to completion. The process involves researching solar policies, local energy providers and eligible nonprofits; educating the nonprofits on the benefits of solar and the solar seed fund; marketing and fundraising, and much more.

The first group of Solar Ambassadors learned a lot in the process of fulfilling their commitment. As part of the program, RE-volv requires a leader from each college team to attend an intensive training session in California, and the team leaders take that knowledge back to their home teams.

“While CCU has its own team, we are supposed to support all the teams and work together. That’s how we spread solar to nonprofits across the U.S.,” said Martin.

To get the team motivated and to show them the “utopia of solar,” Martin led a winter break trip in 2016 to Kauai, Hawaii, an area that has resolved to operate totally on renewable energy by 2045. The Kauai Utilty Cooperative and the mayor of Kauai sponsored the trip so the team could learn about their solar policy and think of ways to implement similar policies in South Carolina. Once they returned from Hawaii, they were better equipped with the knowledge and resources they needed to start the process of putting solar panels on a local nonprofit.

To supplement all the knowledge and experience they were gaining in policy, marketing and research, Martin planned a spring break trip to Denver in 2018 to expose the ambassadors to the physical side of the industry—design and installation. During that trip, the students were able to install solar panels on two homes in low-income communities.

For spring break 2019, Martin plans to bring North Carolina’s state mobile solar training unit to CCU so the students will be trained at the initial level as North American Board of Certified Energy Practitioners (NABCEP). Martin said this training is the solar industry’s professional credential that will enable the students to get their foot in the door with a potential employer after they graduate.

“When I tell professionals that we train students at the initial level of NABCEP training, they can’t believe it,” Martin said. “Interestingly enough, many people who currently work in the industry don’t have that certification because of the cost. We are fortunate to have experiential learning funds supporting us.”

The ambassadors’ initial plan to put solar on a homeless shelter fell through in early 2017 due to reasons beyond their control, but they regrouped with VFW Post 10804 in Little River, raising $57,000 in Spring 2018 for the install. That project ended up being RE-volv’s largest fundraising project to date.

The students chose the VFW Post in Little River as the target for their next solar project for two important reasons.

In a New Light: Thanks to the Solar Ambassadors, the VFW Post in Little River is now a solar facility. Shani Caplan-Chernoff (far left) was on hand for the installation of the solar panels. Professor Pam Martin (far right) spoke at the ceremony before the ribbon cutting (below) on Oct. 13.

“Veterans are an important part of our community in Horry County,” said Martin. “They contribute a lot to our campus, and we value their service to our country. The students also made a smart choice by analyzing energy policy and utility rates. Horry Electric has a program called net metering in which any excess energy is paid for by the utility. The students made a strategic choice to choose an organization that would make good economic sense and that is near and dear to their hearts.” 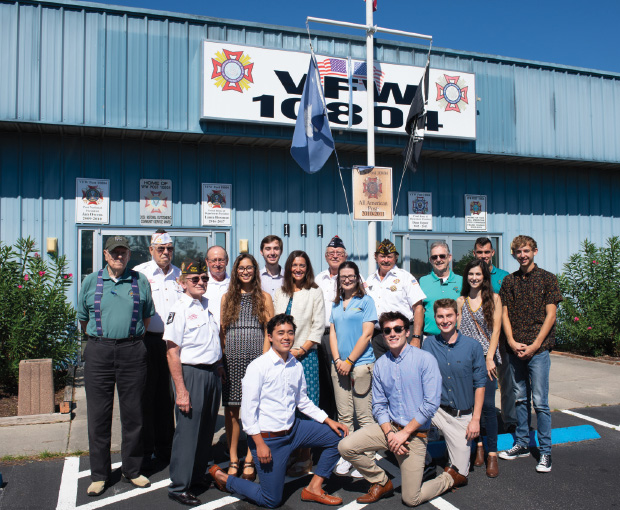 The lease agreement with VFW Post 10804 was signed in February 2018, and fundraising began immediately after that. The team had around two months to raise $57,000, but they got a welcome assist from the Leonardo DiCaprio Foundation, which agreed to sponsor 50 percent of the project. They reached their goal in April, and the solar panels were installed on the VFW Post in mid-August, completing the first project of the first Solar Ambassador team at CCU.

“After every successful project, Solar Ambassador teams have more confidence in being able to help another nonprofit in the community,” said Shani Caplan-Chernoff, a senior interdisciplinary studies major and the 2017-2018 project lead. “The more projects we collectively complete, the easier it is going to get for future teams through the solar seed fund.”

So what started as a seed of a program at CCU will now be planting seeds for the growth of the solar industry throughout the community.

“We want this program to get bigger,” said Sweeney. “We hope other VFWs want solar panels, too, and that we can do this throughout Horry and Georgetown counties.”

“I think it’s wonderfully innovative,” said Margo Sheridan, chair of the house committee at Post 10804. “I hope we are a model for other nonprofits in South Carolina. We have VFW posts in Georgetown, Marion County and Florence.”

Sheridan said she expects to see appreciable savings from the solar panels, beyond the predicted 15 percent savings overall. The VFW operates out of a large building off Highway 15 in Little River and serves more than 700 members.

With one project under their belts and after being accepted as a Solar Ambassador program with RE-volv for the 2018-2019 year, the CCU team had already started working on the next installation project before the sun even shone on the VFW panels. Two nonprofits in Georgetown County reached out to the team in late Spring 2018 with questions about how they could get solar installed on their facilities, and work with those organizations has begun.

As Ratliff says, they have to keep the momentum going and growing by “saving the world, one rooftop at a time.”