Our gleaming new Chauncey sculpture was installed at the entrance to the TD Sports Complex in October 2015.

Created by Logan Woodle of CCU’s Department of Visual Arts, this proud, combative figure is destined to become a Coastal Carolina icon for generations into the future. This photo essay chronicles the evolution of the sculpture from his nativity as a clay model to his public debut.

On some college campuses, the relationship between the arts and athletics is cold and distant. Athens and Sparta. That’s not the case at Coastal Carolina University, and it’s one of the reasons I love working here. 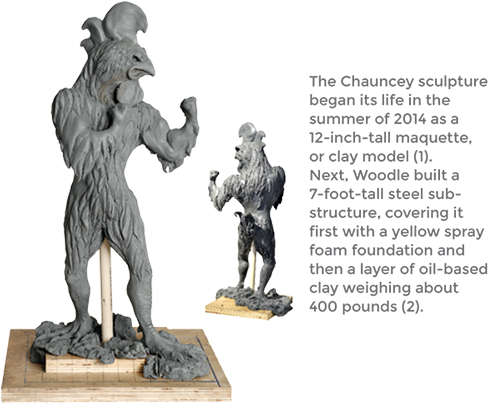 This relationship between arts and athletics began about 50 years ago when an English professor, Cal Maddox, came up with the idea of naming our mascot “the Chanticleer,” a name selected from that old warhorse of British lit, The Canterbury Tales. The institution had been trying to create a distinctive identity long before our independence in 1993. For a while, during our early association with the University of South Carolina, we were the Gamecocks, and we had some other names, including, for one season, the Spartans. But I really like the idea that, back then, Coastal was casual enough that one person could say, “How about the Chanticleers?” It wasn’t focus grouped. It wasn’t tested for marketing purposes. It just fit.

Over the years, on occasion, there has been talk about chang- ing mascots, but it’s never gotten very far. We love Chauncey. It’s wonderful when I’m on the road and people ask me about our unique mascot. For me, the significant thing is that there was a moment early in our institutional history when the academic side, the artistic side and the literary side were united with the athletic side. It was built into the identity of our athletic programs and thus became part of the identity of the institution. So when we say, “Chants Up,” and when we say, “We’re all Chanticleers,” it means more than our attendance at athletic events. It says something about our values, and it says something about our identity as an academic community.

That relationship is manifested in the statue you see over my shoulder. University athletics needed a symbol that would be central to our new sports complex. We knew the symbol had to represent our history as well as look to the future. We could have commissioned a sculpture by a professional from outside our institution, which would have been perfectly appropriate and would have shown that we are patrons of the arts. Instead, led by an enlightened president and upper administration, we came together and decided, rather than spending money on a commissioned sculpture, to build a world-class bronze-casting facility right here on campus that will be used for generations.

That decision helped set our visual arts program apart. This statue, of course, will primarily be associated with our winning athletic teams. But whenever I walk by it, I will remember that our art students were part of its creation from the very beginning. That they had their hands on the equipment. They helped take it from a sketch, to a model, to reality. At Coastal, they were not set aside, pushed back and told, “Let the adults do this.” That’s not our culture, it’s not who we are, and it doesn’t reflect what we can be.

The greatest part of the credit for the beautiful and evocative piece behind me goes to Logan Woodle, our artist. Over the past year and a half, it has often seemed as though the sculpture studio and the bronze-casting studio were a 24-7 operation. On Saturdays, rainy days and cold days, Logan fought not just the elements, but also the element of bronze. He had to work with that substance, dangerous heat, specialized equipment and a new facility that we were learning how to use on the fly. However, following the great Coastal tradition, we say, “Let’s try it. We will figure it out as we go.”

‌‌Our founders uttered those same words, I imagine, in 1954, and it hasn’t been a bad philosophy. Logan did everything necessary to bring this project in on deadline. He sacrificed his personal time. He certainly sacrificed other projects he could have done. There were frustrations, and there were moments we were wondering if this was going to come together. What makes me so proud that he’s a member of the CCU faculty is that, throughout all this, he had two things in mind—getting it done well, and mak- ing sure it benefited the students. Never did I find him so frustrated that he was in despair. I knew that when he got through this, worked around the problems and then fought through to the end, he wasn’t just making a Chanticleer, he was a Chanticleer.