Barbara J. Blain-Bellamy was elected mayor of Conway in 2015. She served on Conway City Council for 10 years, and she also served four years as deputy city administrator.

Tracy A. Erwin visited her alma mater in October with her stepson Jacob, a senior at Pee Dee Academy in Marion County. She worked in marine science before pursuing a career as a speech pathologist. Jacob plans to attend CCU and major in exercise and sport science.

Guy Ackerman was recently named director of sales for Lennar Homes’ Coastal Carolina division. He helped lead the division to a record-breaking year in sales in his former role as area sales manager. He lives in Mount Pleasant with his wife Renee and two children, Cole and Caitlin.

Kelly Miles Barr, a seventh-grade math teacher at Gilmer County High School in Glenville, W.Va., has been selected as a Renaissance Learning Distinguished Educator for her work with the STAR Math program. She has submitted a presentation proposal for the National Council of Math Teachers conference.

Brooke Cox, senior director of Tidelands Health Group, has been named practice administrator manager of the year by a statewide organization of her peers. The award recognizes her for outstanding leadership of the South Carolina Medical Group Managers Association chapter, for enhancing the strategic operational effectiveness of Tidelands Health and for promoting quality health care delivery to patients. She earned a master’s degree in health administration from the Medical University of South Carolina.

Leah Lubas, formerly the general manager of Dagwood’s Deli, is now a member of the CresCom Bank retail mortgage operations team. Teena Bailey Rogers, a columnist for the Florence Morning News, splits her residence between Dillon and Florence, where she lives as a newlywed with her husband Allan.

Travis Dannelly has been promoted to development officer and assistant vice president with CresCom Bank.

Samantha E. Durham earned a master’s degree in social work. For the last five years, she has been a part-time therapist at a community center in New Jersey working with young children and their families.

Angela Nordeen is obtaining a master’s degree on a dual track of school and clinical counseling at Lenoir-Rhyne University in Hickory, N.C. She plans to return to Myrtle Beach area in the summer of 2017 to complete internships in both areas.

Chelsea Trimper recently celebrated her third anniversary at the Ritz-Carlton Hotel in Kapalua, Hawaii, where she was hired as a naturalist with Jean-Michel Cousteau’s Ambassadors of the Environment program. A resident of Maui, Trimper earned the Ritz-Carlton “5 Star Award” as the Learning Coach/Supervisor of the Year in 2014.

Kathryn Callahan was recently named the marketing coordinator for Zodiac Nautic North America, based in Summerville, S.C. She handles marketing, social media and press conferences, and she serves as the parts and accessories sales coordinator.

Roosevelt Corbett and Fredricka Dillard were married on Saturday, Sept. 26, 2015, at the Millstone at Adam’s Pond in Columbia, S.C.

Jennifer K. Gracia has been accepted into the master of social work program at the University of Southern California.

Nicholas J. Mazzocchi is a production assistant for The Chew on ABC.

Jesse D. Nevins is a membership coordinator and teacher with CREATE!, a Conway artist group that is building an artistically vibrant community by supporting regional artists and promoting public participation in the arts. She also teaches an after-school program for elementary school-age students at the Mary Thompson Building in Collins Park.

Vanessa L. Suggs has worked as a travel nurse at East Texas Medical Center, the Medical University of South Carolina and Duke University Hospital. She plans to move to the Dominican Republic to serve as a full-time medical missionary through SCORE International, providing quality medical care to Dominicans and Haitians in sugar cane villages.

Lillian Carroll is a special educator at Myrtle Beach Primary School. She is also earning a master’s degree in educational leadership at CCU.

Patrick S. O’Brien was named program director for the First Tee of the Grand Strand. He is the lead coach at Eagle Nest Golf Club’s after-school program and works the bag drop at Barefoot Resort’s Dye Club. He held an internship with the PGA of America’s Northern Texas Section based in Dallas from January through August 2014 and ran the section’s junior series for ages 7-17.

Justin Portillo, a third-year mid-fielder, has rejoined the Charlotte Battery soccer club for the 2016 season.

Christopher Seger joined Vanacore, DeBenedictus, DiGovanni & Weddell as an associate accountant, working in Newburgh, N.Y. He earned a master’s degree in accounting with a focus on taxes.

Jennifer Cangeme is a recipient of the James E. Clyburn Fellowship sponsored by the South Carolina Democratic Party. She is one of three recipients from Horry County.

Rachel McMillan works as an operations analyst for Wells Fargo in Charlotte, N.C.

LeAna Norman is the co-owner of Contagious Cuts, an upscale barbershop in Myrtle Beach. While pursuing a degree in psychology at Coastal Carolina University, she also earned a barber license. She attributes the knowledge she gained at CCU as the impetus for starting her own business. The 2014 Young Alumna of the Year, Brooke Donaldson ’11, was teaching a class at The Seeing Eye in Morristown, N.J., where she works as a Seeing Eye dog trainer. The purpose of the class is to connect Seeing Eye dogs with new owners, and she found the perfect match for Arthur in Frank Gaudioso ’89. At this first meeting, Donaldson and Gaudioso had the pleasant surprise of discovering they were both graduates of CCU.

During the month of June 2015, Donaldson led training sessions with Gaudioso and Arthur, a cross between a golden retriever and a Labrador retriever. The two Chanticleer alums have had a great time getting to know each other and reminiscing about their CCU days—although they are a generation apart.

Gaudioso has just retired to the Myrtle Beach area, the scene of his college days, and is having a good time introducing Arthur to the Grand Strand.

Alumna Profile: Elanna Rubenstein: A touch of teal at ESPN 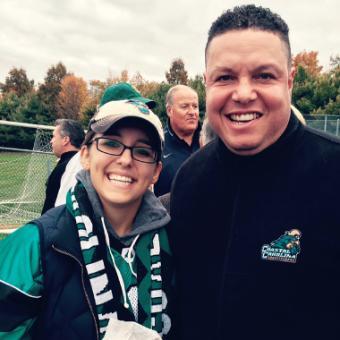 What do a Coastal Carolina University alumni towel, hat, foam fingers, scarf and a rooster rag have in common? They all adorn the office desk of Elanna Rubenstein ’11, an ESPN assignment editor who works in the global sports network’s headquarters in Bristol, Conn.

“I even placed a Chauncey head strategically on the back of one of my co-worker’s computer monitors so when we have guests live from our newsroom camera, there is a chance Chauncey can be seen on TV,” she said.

Back when Rubenstein was in high school, a prerequisite of her college search was to get far away from her hometown of Simsbury, Conn. She looked at schools in Arizona, North Carolina and Ohio. One day, a classmate showed her the website of the school she was planning to attend. With one look at that site—coastal.edu—Rubenstein’s search came to an abrupt end.

“I fell in love with the pictures of the campus online and applied right away,” she said. “I didn’t even visit before applying. I knew it was where I needed to be.”

Rubenstein took full advantage of the Coastal experience while earning a bachelor’s degree in communication. She made lasting friendships, attended sporting events and loved going to CINO Day, the annual campus carnival. She also received excellent training for her future profession from a group of faculty members, including Lee Bollinger, Wes Fondren, Linda Kuykendall and Carole O’Neill.

“Being a woman working in television, especially sports media, can be extremely tough,” Rubenstein said. “A class I took with Professor Bollinger, ‘Women and Media,’ prepared me for the things I would encounter in the workforce. I also gained great hands-on experience in class with Professor O’Neill and her studio production course, where I had the opportunity to produce, direct and write scripts, which eventually helped me land my first job.”

As a student-worker in the Chanticleer athletic department, she served as a camera operator for the baseball team, helped with video streaming and the soundboard at basketball games, and worked in the sports information, business and ticket offices.

“I did just about any job the athletic department would let me do,” Rubenstein said. “The hands-on experience I received there gave me a real sense of belonging—and extreme Chanticleer pride.”

Rubenstein’s first job out of college was as an assignment editor with WFSB-TV, a CBS affiliate in Connecticut where she had done a summer internship as part of her CCU degree requirements. Two years later, she applied to ESPN, her dream employer. “After a gauntlet of interviews and sports knowledge test, I landed the gig!”

As assignment editor for SportsCenter and all of the network’s NFL studio shows, she is responsible for setting up coverage for games, events and breaking news.

“I have the luxury of having a hand in almost everything the viewer sees on TV,” Rubenstein said. “I honestly would not be where I am today if it were not for the amazing Coastal athletic department and all the doors they opened for me.” 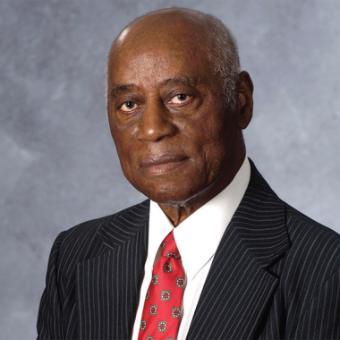 Known as the “Father of Chanticleer Football,” Robert “Duke” Brown of Camden, S.C., died on March 4, 2016. Brown was an original member of the CCU board of trustees, serving from 1993 to 2013. He made it a point to go on record at nearly every board meeting stating his support for a football program at CCU. A former player and coach, he believed that the addition of football would enhance student life and bring other benefits to the campus. His patient efforts to build consensus on this issue eventually proved successful, and his dream became a reality. The decision to bring football to CCU was announced in 1999, and the Chanticleer football team played its first game in 2003. In 2012, a prominent area in CCU’s Adkins Field House was named the Robert Duke Brown Hall of Champions.

Originally from Orange, N.J., Brown earned a bachelor’s degree in biology from Johnson C. Smith University and a master’s degree in school administration from New York University. He was head football coach at Morris College in Sumter and Shaw University in Raleigh.