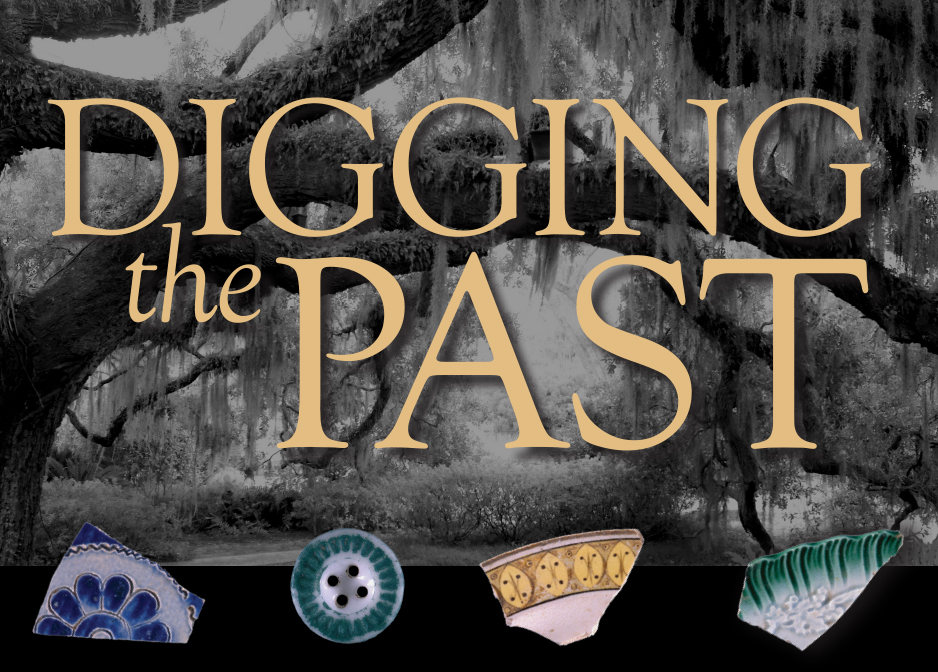 In the decades before the Civil War, the area between Murrells Inlet and Georgetown called the Waccamaw Neck was the center of the world’s rice production. One of the plantations on the neck, Brookgreen, was the home of Joshua John Ward, the largest slaveholder in America at the time of his death in 1853. The property, now part of a world-famous sculpture garden, was then a teeming cosmos of agricultural activity carried out by hundreds of African-Americans. While their labor secured enormous wealth for their owners, their lives contributed immeasurable riches to the culture of the region. This complex society, founded on a catastrophic conception of humanity, would soon come to a sudden end.

Much about this lost world, so important to a proper under-standing of our history, is unknown to us. A significant part of the story is buried just a few feet below the surface of the earth, and a new partnership between Brookgreen Gardens and Coastal Carolina University will bring it to the surface.

This past June, David Palmer became the first holder of the James L. Michie Endowed Professorship in Historical Archaeology, which was established at CCU in 2012. As part of the professorship, Palmer also becomes the first archaeologist-in-residence at Brookgreen Gardens. This dual role will enable Brookgreen and CCU to resume an archaeological association that has lain dormant since the death of Coastal professor Jim Michie, who led several pioneering excavations on the property in the 1990s.

“One of my grandfathers was interested in natural history and folk life, so he exposed me to a lot of those things,” he said. “I started out studying biology in college, but I took an introductory archaeology course and I just liked it. What really appealed to me was the interdisciplinary nature of the field, as you can combine aspects of the sciences with historical inquiry and cultural questions.”

One of his archaeology classes involved case studies of sites, one of which was Fort Mose in St. Augustine, Fla., the first free community of escaped slaves whose freedom was exchanged for loyalty to the Spanish.

“I grew up maybe a half-hour from St. Augustine, and I’d never heard of it,” Palmer said. “I had to go to New England to learn about something a half-hour from where I grew up. It was kind of a wake-up call. I realized that this is something I can contribute to.”

At Lafayette, Palmer served as a regional archaeologist, a hybrid position that required him to teach some courses but also serve as a community liaison. For example, if a local farmer turned up a potential historical artifact while plowing his fields, Palmer was the person he could call upon as a resource. Palmer also gave lots of talks to local groups and organizations, wrote for the State Archaeological Society and gathered information from the public to document previously unknown sites. He also worked with an assistant attorney general to help a descendant African-American community gain unimpeded access to a local cemetery.

“The position that I have here is a very good fit with my research interests and the work I’ve done in the past,” Palmer said. “Some of the same issues and projects I worked on in Louisiana I will be able to address here with the public interpretation goals of Brookgreen Gardens. There is so much opportunity and no shortage of work to be done.”

“Archaeology really intersects with human rights and issues of heritage,” Palmer said. “You can get specific details and aspects of people’s lives and then tie it into the larger narrative of history.”

That’s what Palmer hopes to do at Brookgreen Gardens. He led a field school during Maymester with 10 to 12 CCU students and several volunteers at Brookgreen Plantation.

Those volunteers come from a local group known as the Waccamaw Archaeology Partnership led by Michie’s former research assistant Susan Hoffer McMillan, who was instrumental in creating the CCU professorship in his memory. Following the methods established by Michie during the digs he led at the adjacent plantation, called The Oaks, the group spent three years in the 2000s excavating the slave village at Brookgreen, an area that once held about 50 cabins. McMillan says there is still work to be done on the site.

Palmer hopes that bringing the students and the experienced volunteers together will create a synergy of past and present that will unite them as they uncover and analyze the past to learn about our future. He says the group of volunteers is well-trained, and he looks forward to being able to make more connections in the community through their expertise.

The field school, and other hands-on initiatives Palmer has planned, entails more than just digging up a site and finding artifacts. “You have to teach the students the proper way to do things and understand why it’s done that way,” he said. “When we are excavating a site, we are actually destroying the site, albeit very carefully and in a controlled and well-documented manner. So conservation ethics is foremost these days. Cultural resources and heritage management and interpretation and even heritage tourism, all these things are intertwined.”

“We have a lot of students who are really excited about [the field school],” said Carolyn Dillian, associate professor of history and coordinator of the anthropology program at CCU. “Members of the community will also be able to learn about archaeology and history through the programs and lectures that Dr. Palmer will offer.”

Careers open to students who study archaeology and/or anthropology don’t necessarily involve shoveling dirt at historical sites. Students will be equipped to go into fields such as museum docent, assistant archivist, cultural resource management and more. And heritage tourism is a rapidly growing industry, said Palmer, especially in this region.

Brookgreen Gardens was created in the early 1930s by philanthropist Archer Huntington and his wife Anna Hyatt Huntington, a distinguished sculptor. The couple purchased four contiguous rice plantations near Murrells Inlet—The Oaks, Brookgreen, Springfield and Laurel Hill—totaling more than 9,100 acres. The property, with its deep history, world-class landscaping, extensive sculpture installations, zoo and cultural events, is now one of the premier attractions in the Southeast.

“It really gives us the opportunity to find out and interpret what happened on those plantations and to examine the impact of past events on all our lives from a historical and economics standpoint,” said Jewell. “Palmer and his students will help preserve that information, and people will learn from their work for years to come. We hope to have this partnership for a long time. There’s no end to what we can do here. We’re studying human beings; what could be more interesting? All the history that will unveil itself will be the real treasure.”

The current activity in archaeology at Brookgreen is the legacy of James L. Michie, whose passion for local archaeology inspired his former pupils to create a professorship in his name. He taught in the history department at Coastal Carolina University and also served as associate director of the Waccamaw Center for Historical and Cultural Studies from 1990 until his retirement in 1998. His pioneering work at Wachesaw Plantation, his discovery and excavation of Richmond Hill Plantation, and his investigations at The Oaks on the Brookgreen Gardens property were recognized by a lifetime achievement award from the Archaeological Society of South Carolina.

“I have yet to meet someone who didn’t have a glow when talking about Jim Michie,” said David Palmer, the recently appointed James L. Michie Endowed Professor in Historical Archaeology at CCU and archaeologist-in-residence at Brookgreen Gardens. “The fact that a group of his students were inspired by him to create this position says a lot about who he was. I will do my utmost to honor his legacy of being a very public-oriented archaeologist.”