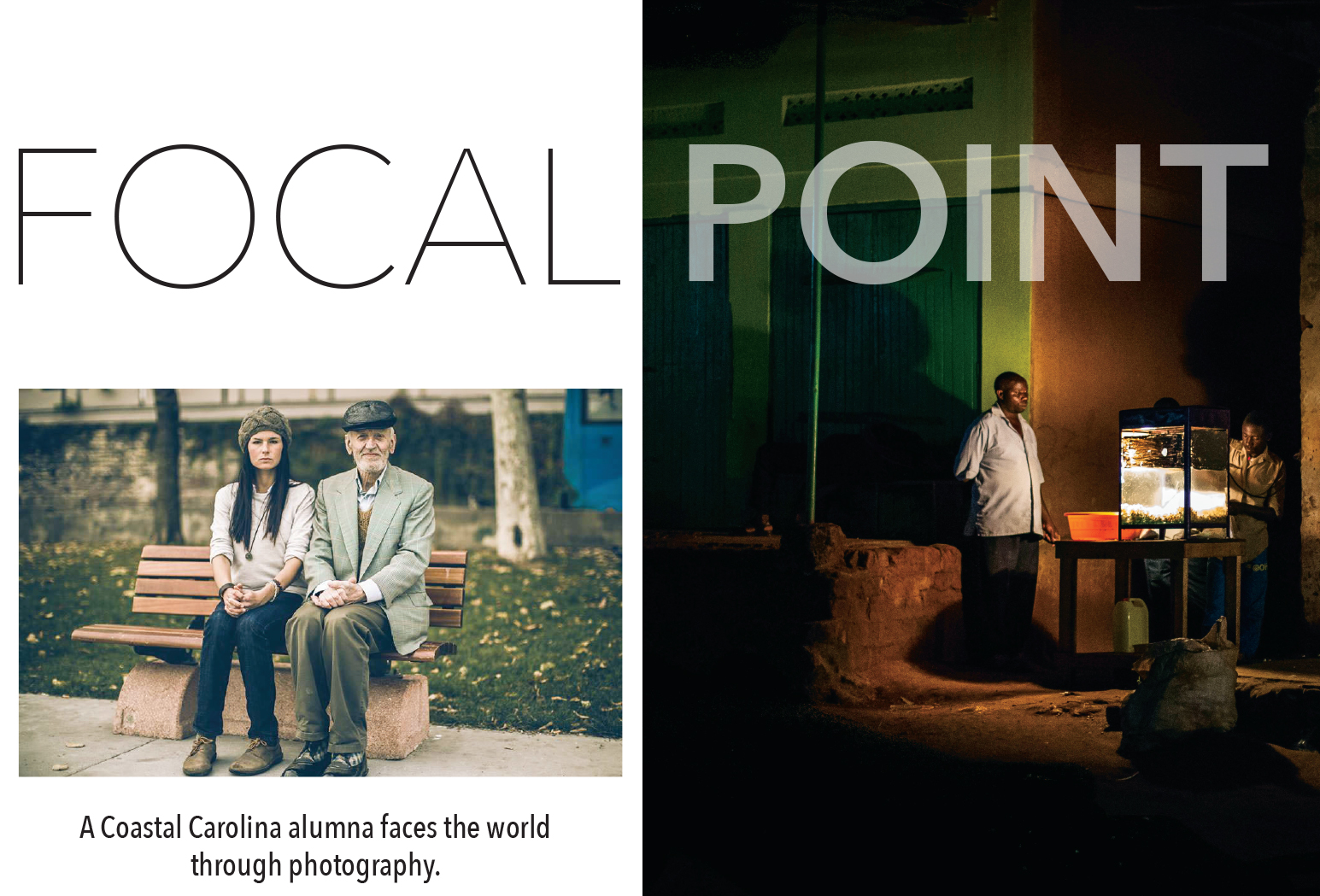 Ten years ago, in the summer of 2006, Maranie Staab was preparing to leave her home in Trafford, Pa., a Pittsburgh suburb, to begin college at Coastal Carolina University. She never dreamed then what the coming decade would hold—the distances she would travel, the challenges she would face, or the impact that her CCU experience would have on the direction of her life.

She had been a standout cross country athlete at Penn Trafford High School, and veteran CCU coach Alan Connie recruited her for his team. “Coach Connie talked me into coming to Coastal,” she says. “He convinced me it would be a good fit for me, and he was right.”

Attracted to the prestige of the Wall College of Business and some of the professors she met, Staab decided to major in marketing and minor in communication. Not surprisingly for a distance runner, as a student she was constantly on the move and eager to challenge herself. In addition to her commitment to the cross country team, she won admission into the highly selective Wall Fellows program, a rigorous leadership course reserved for top students. All through her collegiate career, she maintained a perfect 4.0 grade point average.

Two particular occurrences during her Coastal career would profoundly affect the course of her future. The Wall Fellows program sponsors an international travel experience for its students every summer focusing on on-site visits to global business firms in Europe. It was Staab’s first taste of a foreign culture, and it ignited an enthusiasm for travel that would eventually become central to her selfhood.

In her junior year, one of her communication professors, Deborah Breede, interested her in doing an internship with the Eastern Carolina Coalition against Human Trafficking. “I admit that, at the time, I wasn’t familiar with what human trafficking was,” Staab says, “but I have always been socially conscious and saw the opportunity as one to learn and get involved. The impact of that experience was profound and continues to be influential in my life.”

I believe strongly that travel is an education in itself,” she says. “Especially traveling alone. You find out who you really are and gain confidence in what you’re capable of achieving on your own.”

Settling permanently in the Pittsburgh area, Staab went to work for Xerox as a senior associate in the company’s global services and client management divisions. Then, in October 2012, all her journeys nearly came to an end. Staab was in a serious auto accident that left her with two broken legs and a broken hip. She struggled through months of rehabilitation, first in a wheelchair and then with crutches before learning to walk again. A year passed before she was able to run again.

During this period of involuntary disengagement with the outside world—difficult for someone with her active inclinations—Staab used the time to take stock of her life and refocus. An avid photographer, she had always carried along her camera on her travels. She decided during her convalescence that this passion, which until this point had been relegated to the sidelines while she focused her time and energy on running, was one she really wanted to develop. It was this decision to make the best out of an unfortunate situation that helped Staab emerge from her injuries a more grounded and focused young woman.

As soon as she was able to travel again, Staab set out on a journey that would validate her decision. In October 2013, she took a trip to Turkey. There she worked on her photography with a new sense of purpose and vision, documenting every trail and village she encountered. “Photography was just a hobby until my trip to Turkey,” she says. Returning home, Staab dedicated herself to photography, investing in better equipment, studying the work of photographers she respected, and spending countless hours honing her skills.

“I’m self-taught,” she says, “but I believe if you truly have a passion for something and a drive to learn from people who

are better and know more than you, it’s possible to do most anything. I owe a lot to those who have shared their time and experience with me.”

While continuing to work at Xerox, Staab began volunteering with the Project to End Human Trafficking (PEHT), a Pittsburgh-based nonprofit dedicated to raising awareness about human trafficking. The organization has a team of colleagues in Uganda, and Staab has twice traveled to work with them in the field.

Combining her skill with the camera and her experience and understanding of trafficking—which began with her CCU internship—her involvement with PEHT and the images that have resulted have become a significant part of her life’s work. The experiences with PEHT, especially in Uganda, have helped her learn to use her camera not just to capture arresting images, but to tell human stories and to stimulate change. In September 2015, an exhibit of Staab’s photographs titled “Women and Children of Uganda” was part of a PEHT fundraiser in Pittsburgh. All proceeds from the sale of her photos were donated toward the work of the organization.

Staab has focused her lenses on other social issues that are closer to home, creating socially compelling and artistically vibrant photo essays on the homeless people of Pittsburgh and on ongoing race issues within her community. Driven by a desire to better understand the human experience and by a firm conviction that images have the power to create change, she believes in using her camera wisely. “Images affect peoples’ souls and when done well they will inform, inspire and ultimately contribute to human progress,” she says.

In the fall of 2015, after a second trip to Uganda, Staab left Xerox to devote herself entirely to pursuing a career as an independent photographer and photojournalist. She hopes to do more traveling, and one of her perennial destinations is the CCU campus. She has made a point of returning every couple of years to attend cross country events.

If her next 10 years are as full as the previous 10, beginning with her first journey to CCU, she’s prepared to go the distance, camera in hand.