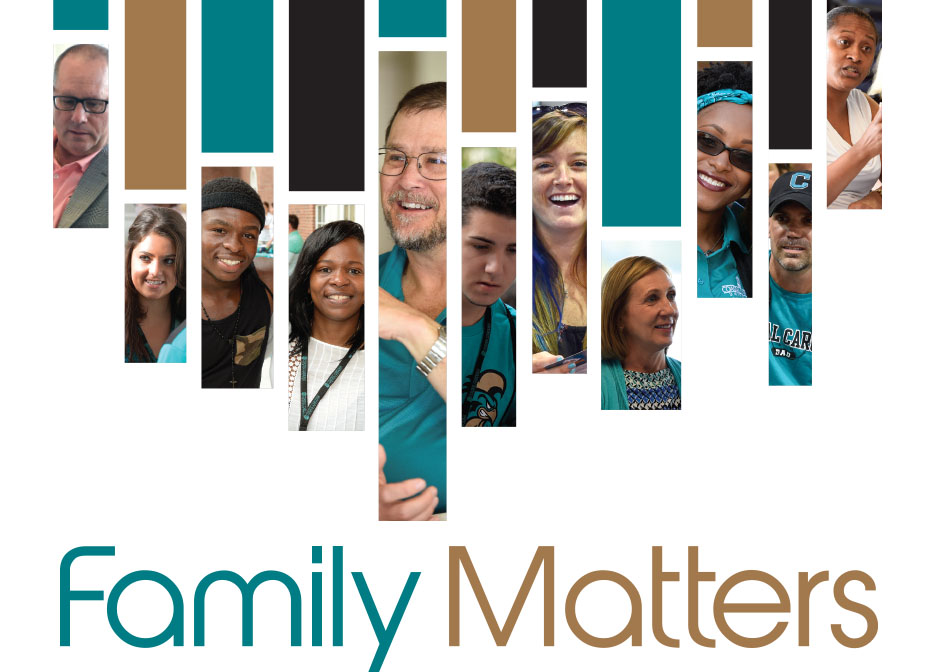 Coastal Carolina University is drawing on one of its greatest untapped resources to create a great collegiate environment.

Going off to college traditionally marks a turning point in the relationship between a student and his or her family. Since their primary focus is on educating the students, too often colleges don’t pay enough attention to the importance of parents and families in higher education. Coastal Carolina University has developed a program that recognizes and utilizes the potential of family members to help facilitate student success in ways that haven’t been tried before.

I believe the Family Council can be a useful liaison between the parents and the school. We can relate to parents on many of the issues they may have.

The establishment of the Family Council had been a longtime goal of Debbie Conner, vice president of campus life and student engagement. Based on observations made during her long career at CCU, she saw the need for a permanent body composed of parents and family members of current students who could provide a new web of connectivity to benefit students and the University.

With approval and support from President David A. DeCenzo and Provost Ralph Byington, Conner invited interested parents to apply for membership in a new committee whose general mission is to serve as a liaison between the University and family members of our students. A charter group of six individuals met for the first time in 2015 to begin the process of developing effective methods to carry out this goal.

“One of the things that excites me most about the Family Council,” says Conner, “is the potential of this group to provide guidance and feedback based on a perspective that we haven’t had before.”

More than a year later, the original nucleus has grown to an organization of 29 members. During the first year, Conner and her team led a series of meetings designed to orient the group to the unique culture and traditions of CCU. In addition to developing a mission statement, the group has identified a few major projects it will focus on.

“One of the strongest projects we are working on,” says original council member Bill Branch of Nashville, Tenn., “is the establishment of a Family Fund, a monetary mechanism designated to assist families in emergency situations. For example, if a student is hospitalized due to an accident, the fund could help pay for the parents’ lodgings or travel.” Branch, an original member of the council, is the father of Bonnie Branch, a May 2016 graduate who is now enrolled in the Master of Teaching (MAT) program at CCU.

The council is now developing plans to raise money for the fund. The group is also brainstorming on ways to assist CCU’s Office of Admissions in student recruitment. Members of the group are making themselves available during Orientation and Family Weekend to answer questions posed by new families on campus.

“Even though the Coastal staff does a great job at Orientation in giving a realistic picture of what students and families can expect at CCU, the peer-to-peer perspective that parents offer to other parents is especially valuable to new families,” says council member Maria Elias-Williams, a Loris, S.C., attorney whose son Charles Cobi Williams is a junior majoring in economics and finance.

Many of the Family Council members say they were motivated to get involved because of their belief in the future of CCU. Brian Baker of Huntersville, N.C., whose daughter Andrea is a senior exercise and sport science major, thinks that Coastal is destined to be ranked with the biggest and best universities in the state. “Twenty years from now, when people from anywhere in country ask Andrea where she went to college, they’re going to say ‘Wow, that’s a great school!’ ”

Renée Johnson of Dumfries, Va., the mother of biology major Ella-Chanel Benton, believes she is “getting in on the ground floor of something exciting!”

“The more time I spend on campus and the more I get to know the people at CCU, the more impressed I am,” said Branch. “The overall commitment from the University administration and faculty to the students is tremendous; it made me want to be a part of it and try to contribute in some way. I believe [the Family Council] can be a useful liaison between the parents and the school. We can relate to parents on many of the issues they may have.”

One of the things that excites me most about the Family Council is the potential of this group to provide guidance and feedback based on a perspective that we haven’t had before. ” –Debbie Conner, vice president of campus life and student engagement

During the summer of 2016, eight members of the council participated in Orientation, answering questions and interacting with parents as part of the family sessions.

“It was good to talk to another parent, someone who understands the emotions and feelings you’re going through when you prepare to separate from your child for the first time,” said Jamie Lane, a parent from Manawa, Wis., who attended Orientation in July with her husband, Allen. Family Council member Elias-Williams helped facilitate the session, and the Lanes spoke with her afterward while their daughter Saharra, a freshman majoring in marine science, was involved in student sessions.

“Maria had been through what we were experiencing, so we could all relate on the same level,” said Lane. “The Coastal staff are wonderful, but they can seem somewhat like salesmen, which is only natural since they work for the University. Talking with people like Maria provides a different perspective. It’s a great support system for families.”