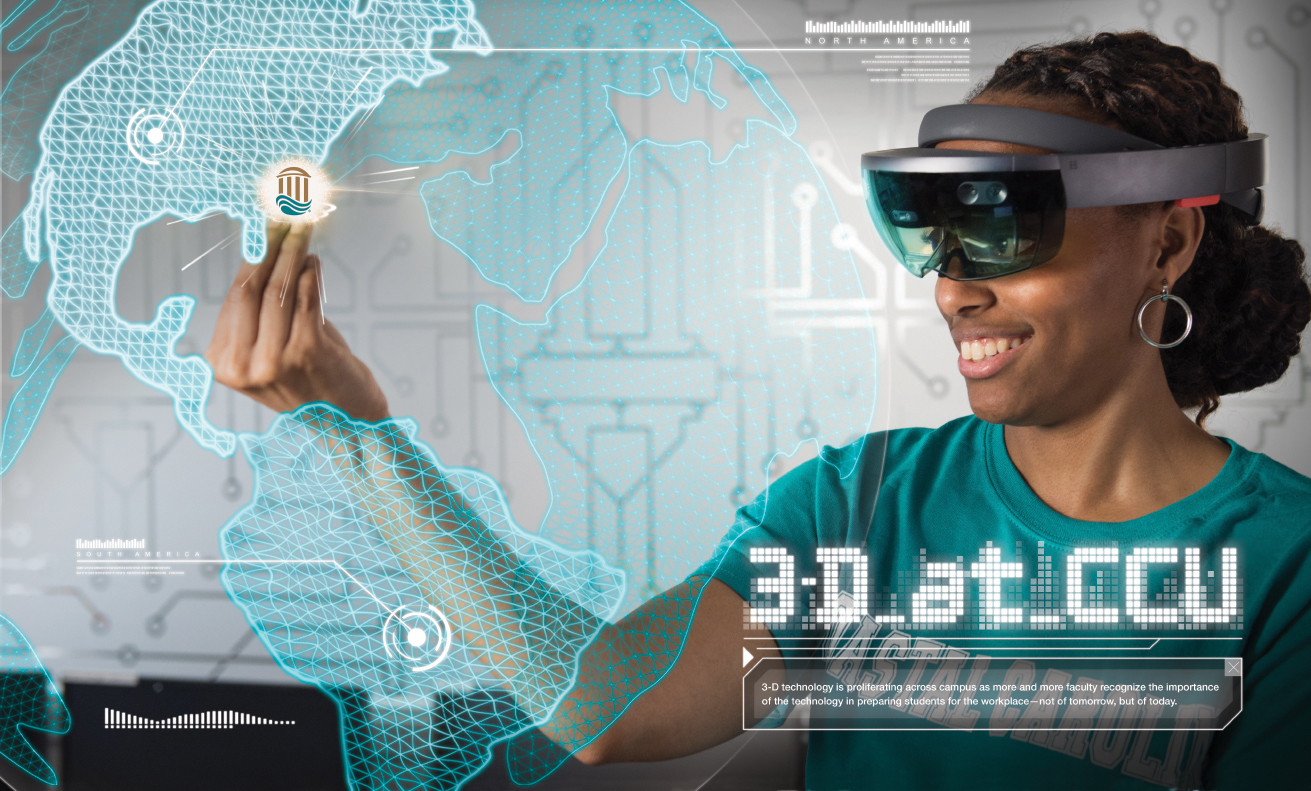 The Chanticleer baseball team may be sporting new headgear next year. Beginning in 2019, there could be a big white “C” emblazoned in raised lettering on the front of the batters’ helmets. But instead of being made in China, these graphic elements will be designed in house and will be produced on 3-D printers in the Edwards College of Humanities and Fine Arts.

Jeff Case, the associate professor of graphic design who came up with the idea for the letter, believes that it is just the start of something big at Coastal Carolina University.

The use of 3-D technology, in design and printing and in areas related to virtual reality, is not new, but the tools that make it possible are now becoming affordable enough for schools and universities to include them in their budgets.

Just before Christmas, for example, computing sciences associate professor Jean French excitedly opened up the box that had just arrived containing a brand new Oculus Rift, a virtual reality headset that she had recently used as a teaching tool in her capstone class for students majoring in information systems. At a cost of about $300, the Oculus Rift is a superb device for introducing students to the many applications of 3-D virtual reality technology.

Anything you can dream, you can print. ”
– Jeff Case, associate professor of graphic design

The shelves in Jeff Case’s office display a collection of white, sculptured figures—busts and objects representative of the ancient East and the classical West—all of which he produced on 3-D printers. Case has been involved with this technology for more than a decade, beginning when he managed a technology center at the University of Arizona, where he earned his MFA in visual communication.

“The first term for it was ‘additive manufacturing,’ then ‘rapid prototyping,’ ” he explained. “It’s been around since the early 1980s.”

The basic concept is this: You design something on a computer screen, and the 3-D printer constructs it. The size of the product is limited only by the size of your printing equipment. The 3-D printers on the CCU campus—there are about 25 of them spread out over several departments—range in size from smaller than a toaster to slightly larger than a mini fridge.

The design is programmed on an STL file that is read by the printer. Construction begins when a coil of plastic colored yarn is fed into a heated stylus that lays down horizontal rows of threads on the flat bed of a warmed metal surface. The threads soon begin to be placed one on top of another as the structure rises vertically, line by line, following the contours of the design. The interior of the object is laced with a honeycomb pattern that gives it solidity.

At Arizona, where he first became interested in this technology, Case worked with the aerospace industry and with medical institutions to build model 3-D prototypes for research purposes. He joined the CCU faculty eight years ago and has been using 3-D printers as teaching tools for the past four years.

Many of the 3-D objects in his office are scale reproductions of mythical Thai folk characters, inspired by a sabbatical in Thailand. Some are designs by students for a class project requiring them to develop fictional characters. On his desk is a 3-D printer-produced jawbone of one of our earliest human ancestors, created at the request of CCU anthropology professor Carolyn Dillian for the purpose of showing students the actual anatomical dimensions and texture of the skeletal remains.

“To see and hold a tangible representation of a concept—that’s huge for students involved in the learning process, and it’s a big advantage in research,” said Case, who has purchased 18 small 3-D printers at $190 each for use in CCU’s graphic arts department. “Anything you can dream, you can print.” 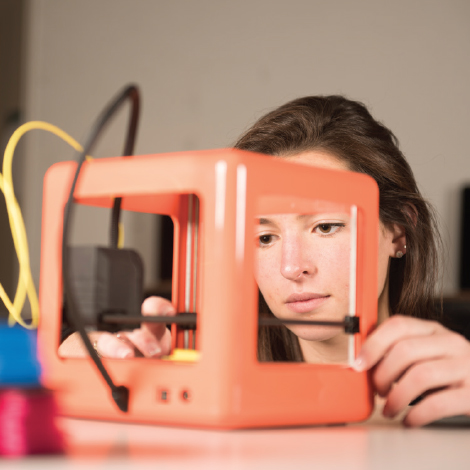 Taylor Pascale at work with a 3-D printer. 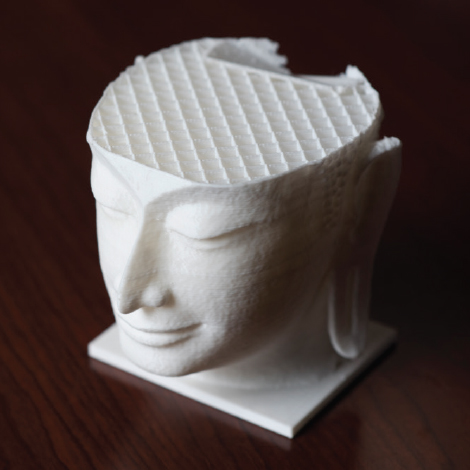 The applications for 3-D printing are endless, according to Case. They are being used in the medical field to make models of human organs for hands-on study by students and medical staff, as well as to make prosthetic limbs and orthopedic implants. There is a 3-D printer on the International Space Station for the purpose of making spare parts. Elementary schools are using them to teach math and science. “My 4-year-old son built a little train,” said Case. “If you can use a mouse, you can build.”

Proponents of 3-D printing believe that these machines will one day be standard household appliances, as common as microwave ovens. “If something breaks in your house, a part you need for a dryer or a dishwasher,” said Case, “instead of ordering it, you will be able to download a file and make the replacement part yourself within an hour.”

Taylor Pascale, a senior graphic design student from Ashburn, Va., has been a major player in the baseball headgear design project. A lacrosse player, she helped Case facilitate the discussions for the project with officials in the Department of Athletics. As a designer, she believes that 3-D will be a part of her professional future.

“It’s an up-and-coming thing,” said Pascale, who graduates in May 2018. “It’s been fun to be a part of the baseball design project, to know I helped start something that will go on after I leave.” 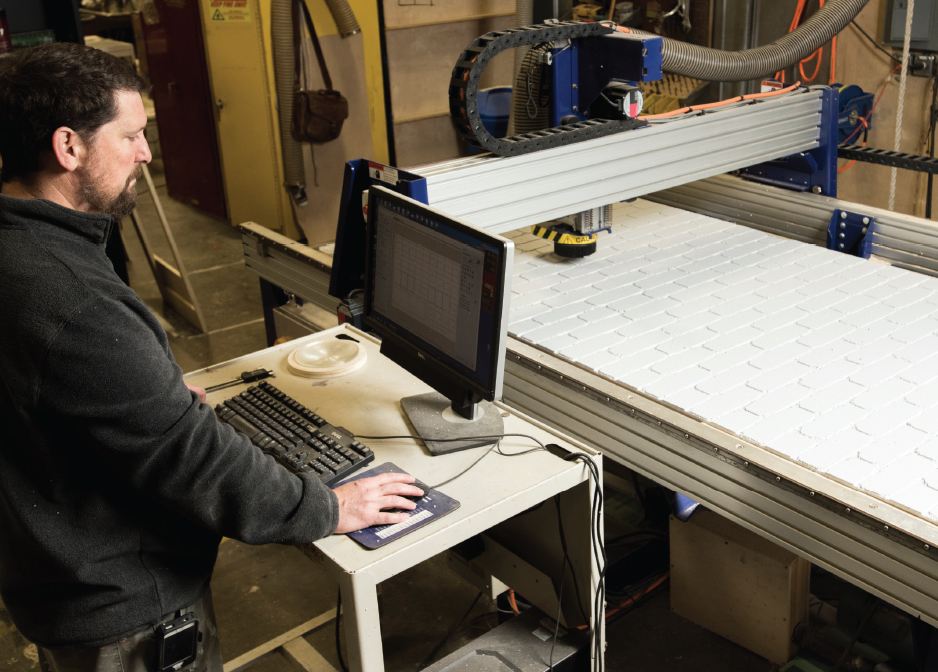 But crafting three-dimension props remotely via digital designs is something the theater department has been doing for three years now with something called a CNC (computer numerical control) router. This machine is the reverse of the 3-D printer in that it creates by subtraction rather than addition, cutting out material to create forms as a sculptor would. The robot can create intricate bas-relief designs in materials such as wood, plastic, foam or metal.

The most recent CCU production at Wheelwright Auditorium was the gangster-themed musical Bullets Over Broadway, which required a set with lots of dingy brick walls. The CNC robot cut thousands of rows of tracks into more than 70 large sheets of Styrofoam, creating a brick effect that was then painted by student artists.

“This robot is a good employee,” said Buck as the CNC whines busily in the background. “It’s here before I am, is still at work after I leave and never complains.”

Buck says the machine has paid for itself in just three years and does in 10 minutes what it would take 45 minutes to do by hand, with better results. But perhaps the machine’s best attribute is the opportunity it gives students to learn the latest techniques in theater craft. “It is definitely making our students more marketable in the workplace,” said Buck. 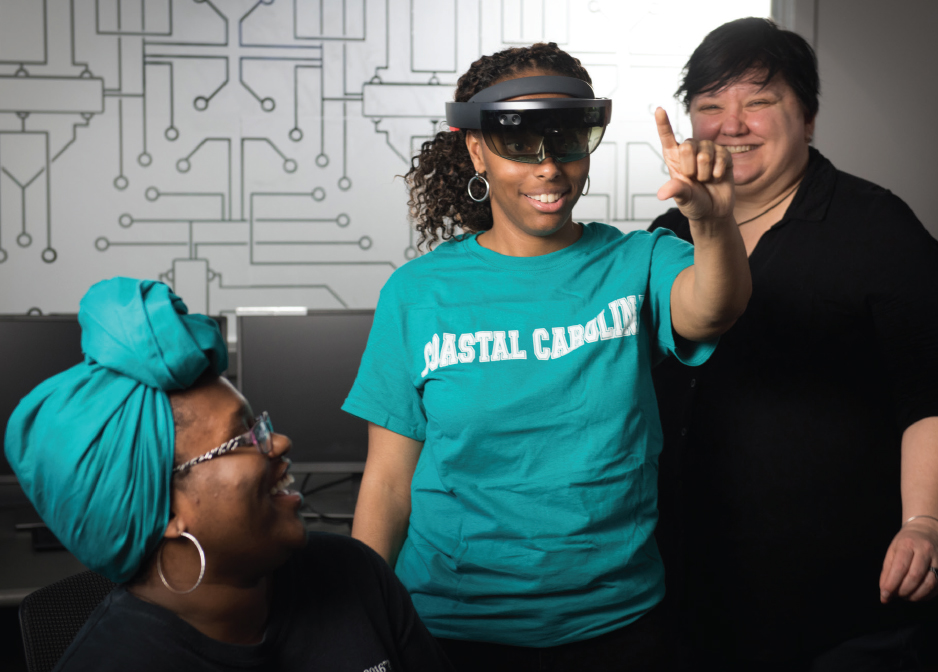 Any time Susan Bergeron visits a historical site, she has always found herself wondering, imagining what it looked like in the past. She grew up in the Finger Lakes area of New York and earned a bachelor’s degree in history at Duke, where she also took her first computer science course. After getting master’s degrees in history at Syracuse and geography at West Virginia University, she did her Ph.D. dissertation at WVU on “Engaging the Virtual Landscape: exploring the development of a spatial experience engine for historical landscape analysis.”

Now Bergeron and her students at CCU are applying 3-D technology to explore and explain the virtual landscape of one of the most notable historical sites in the South Carolina lowcountry. Hampton Plantation, located on the southern bank of the Santee River below Georgetown, dates back to 1735 and was the seat of the politically prominent Rutledge family. George Washington was a visitor on his famous 1791 tour, when he implored the Rutledges not to cut down a particular live oak tree—which still stands to this day.

Bergeron got the idea for the project when she visited the state park historic site and struck up a conversation with the park staff. They put her in touch with Al Hester, the State Parks Historic Sites coordinator, and the two brainstormed about the possibilities for 3-D interpretive guides for Hampton. State parks archaeologist David Jones and Hampton park manager Jayson Sellers are other key partners in the project.

“Except for the main house and a reconstructed kitchen, there’s very little left on the grounds,” said Bergeron. Using the 3-D game engine Unity, she and her students are in the second year of a five-year project to develop “Virtual Hampton,” a digital 3-D recreation of the property that will be used as an interpretive guide to assist visitors to the state park plantation site beginning later this year. 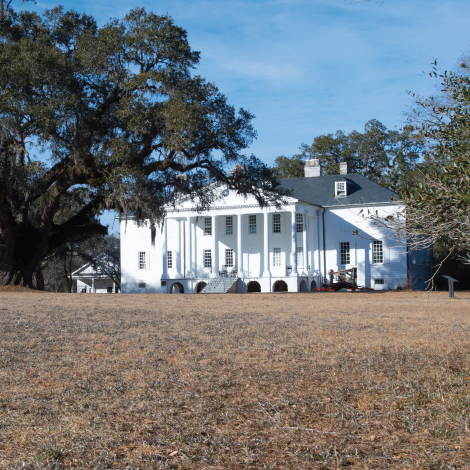 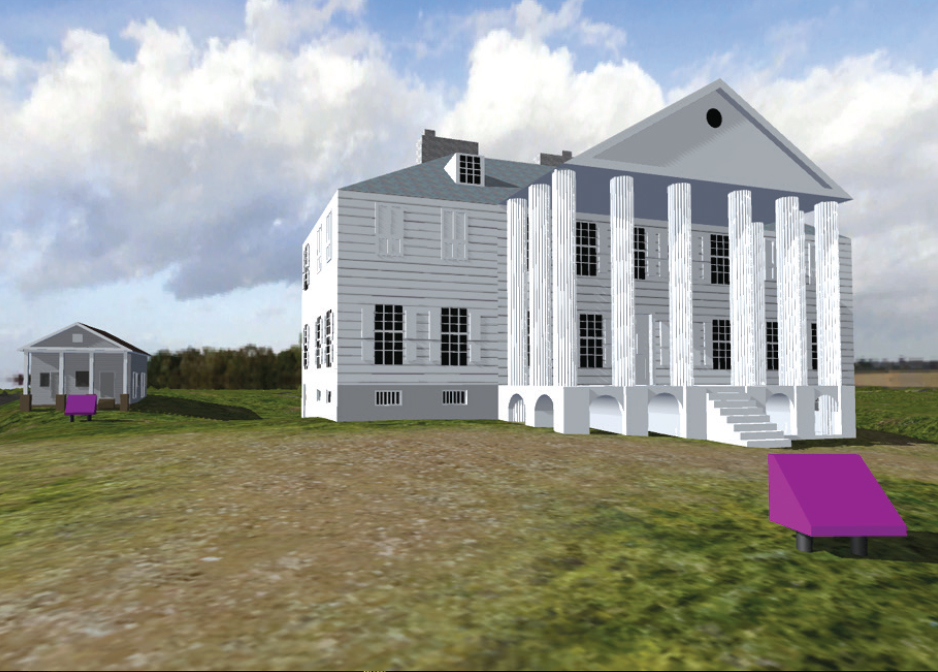 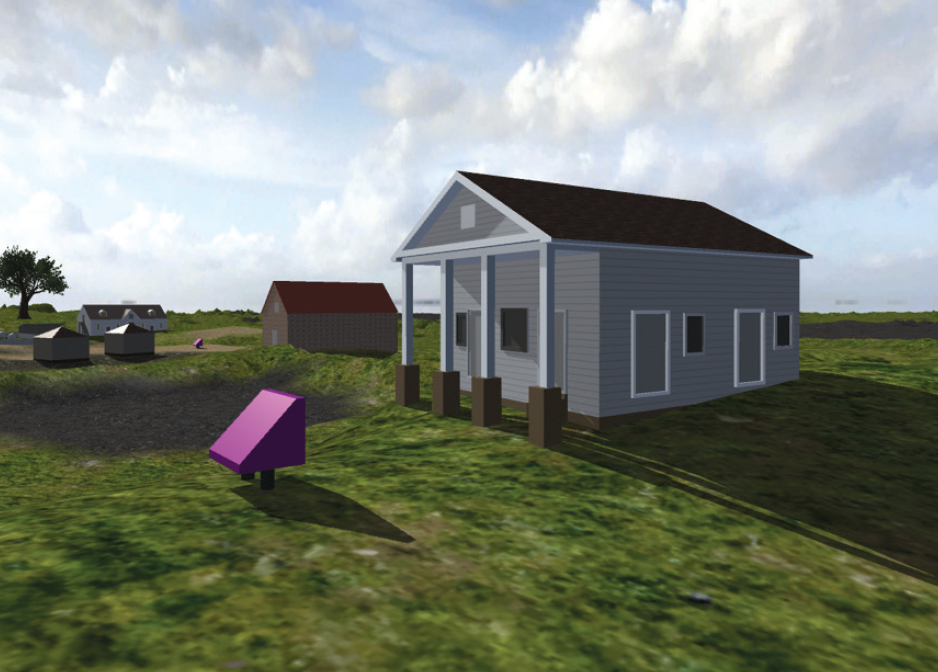 Virtual Hampton allows the user to walk the grounds vicariously via computer screen, moving past and around trees, fences and outbuildings that are long gone. The simulated topography is derived from NOAA’s Digital Coast website, and the positions and types of the buildings were deduced from a rare 1809 plat map and from archaeological research. The project is designed so that visitors to the park will be invited to explore Virtual Hampton on a kiosk in the welcome center before setting out on foot to look at the places they had seen on the screen.

The project employs the technology and simulates the experience of contemporary 3-D video games. “There are those who sneer at computer games, probably because of the word ‘game,’ ” said Bergeron. “But these games rely on decades of very sound computer science as well as solid concepts of story and literature and how the mind works.” 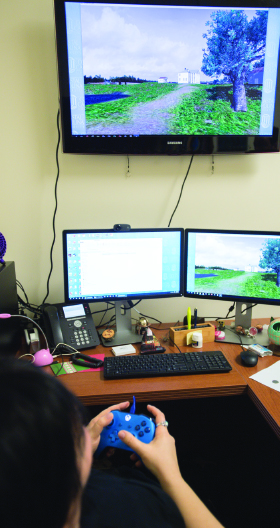 Bergeron, who joined the CCU geography faculty in 2010 and developed Coastal’s minor in geographic information systems (GIS), teaches a class in computer game worldbuilding that is already popular among students across many disciplines. “Every student in the class gives 110 percent, and sometimes those who didn’t get in the class ask if they can just sit in.”

An essential piece of equipment Bergeron uses to teach immersive 3-D technology is the HoloLens, a Microsoft headset that enables users to create mixed reality (merging the real and the virtual world) settings. The HoloLens was acquired by the Department of Anthropology and Geography at CCU through a generous grant from the Horry County Higher Education Commission.

Students are involved in every step of the Virtual Hampton project, according to Bergeron. Two students, Robert Card ’16 and Lorenzo Rice ’17, did a significant amount of the programming on the project last year. Both were offered jobs immediately after graduating. Card is a computer programmer at HTC, and Rice, who listed his Virtual Hampton project prominently on his resumé, is an applications analyst at Santee Cooper.

“Cities and public agencies as well as private businesses are using 3-D as a way to model and manage assets,” said Bergeron, who is on sabbatical during the Spring 2018 semester to prepare Virtual Hampton for its initial implementation at the plantation. She is also in the process of recruiting new students for the next phase of the project. 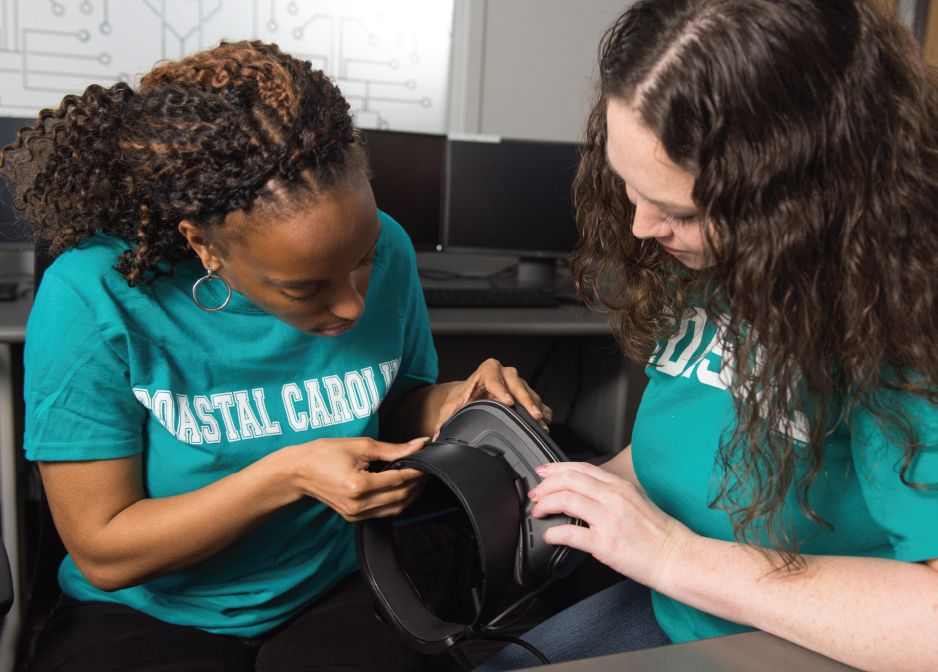 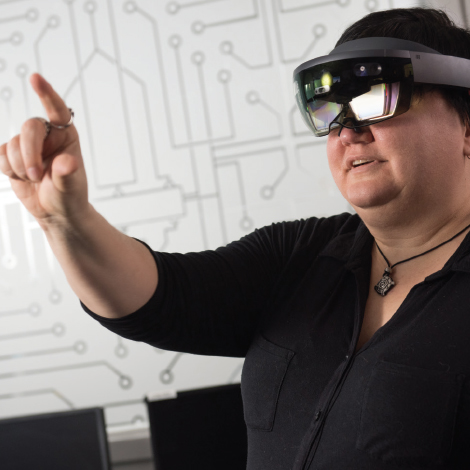 Because Unity is a dynamic platform that can be updated as new ideas develop, Bergeron is excited about how Virtual Hampton will evolve in the future. In addition to the basic virtual walkabout, the program includes videos of historians explaining various features of the property. She foresees the project being offered on a 3-D virtual reality headset as well as on the kiosk.

“There are many sensitive stories that need to be told about the history of this property,” said Bergeron, referring to Hampton’s slave past. She hopes that 3-D technology will play a part in presenting a comprehensive experience of the whole history of Hampton, “not only how it looked 300 years ago, but also how it felt to walk through that landscape. It’s about telling stories and recreating worlds.”