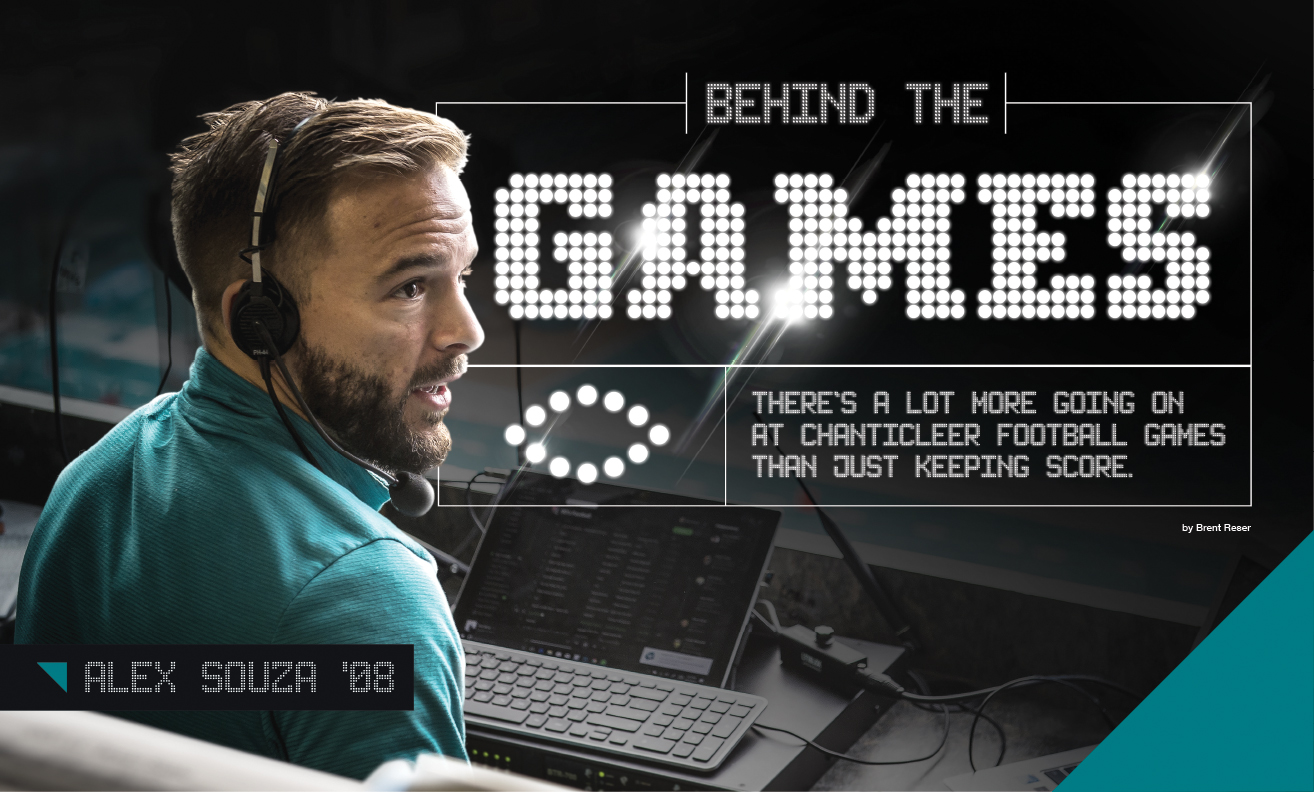 If there is one word that energizes a Coastal Carolina University student-athlete more than any other, it is gameday. The opportunity to perform in front of a #TEALnation home crowd is exhilarating. The mix of adrenaline, excitement and pressure is second to none. But this intoxicating feeling isn’t limited just to those on the field wearing teal uniforms.

“I still get butterflies before big games,” says Alex Souza ’08, a Coastal Carolina athletics staffer who is also expected to perform big on gamedays.

Whether it’s a baseball game, soccer match, lacrosse contest, volleyball match or softball game, Souza’s presence is required and his focus demanded. For those fall afternoon showdowns in Brooks Stadium, the stakes are even higher.

Hired in 2015 as the director of gameday experience and promotions, Souza is responsible for delivering an in-stadium atmosphere that revs up the diverse Chanticleer fan base while energizing the home game environment for those who feed off it the most, the student-athletes.

“Everything that fans see and hear at a game—except for the student-athletes playing—is controlled by us,” says Souza, a native of Cotuit, Mass., who earned a bachelor’s degree from CCU in communication with a minor in journalism.

At a CCU football game, there is a lot to “see and hear.” No matter where you look, something is going on. Chauncey cruises the sidelines on a motorized bike, skydivers glide through the air, fireworks light up the sky. Look up and you will see a videoboard displaying hype videos, replays and sponsor ads. Open your ears and you will hear the fight song played by the Chanticleer Regiment marching band, the techno beat of “The Interlude” rocking the speakers, and the ecstatic voice of the public address announcer exclaiming, “HERE COME THE CHANTICLEERS!”

The stimuli are constant, but also calculated. This many moving parts don’t mesh harmoniously without meticulous planning. A gameday experience is not unlike a major theater production: to deliver something that is effective and memorable there must be organization and teamwork. Achieving all this is a tall order, and it falls on the director.

“Keeping everyone on the same page is a major challenge of my job,” Souza says. The personnel he oversees on gameday—a marketing assistant, digital broadcast coordinator, dance coach, cheer coach, and the director of bands—all have subordinates, mostly students, working with them.

Doing some quick math in his head, Souza estimates that roughly 175 people fall under his gameday experience umbrella for a typical football game. The majority are front and center on the field, performing in clear view of the Brooks Stadium crowd. But Souza himself is never seen.

“On gameday, I don’t want to be noticed,” Souza says about his specific duties as the ringleader. “I don’t want fans to figure out where our booth is, because that means we have messed up.”

Sorry, Alex, but your cover is about to be blown. 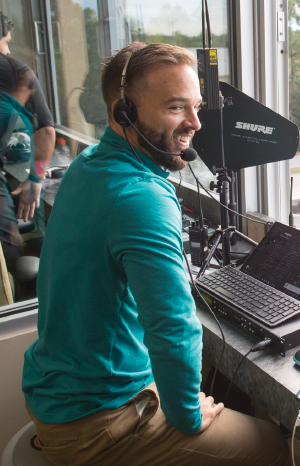 On the third level of the Brooks Stadium press box, there is a small booth that hovers above the 25-yard line on the south half of the field. Sandwiched between the Coastal Carolina coaches box and the visiting team’s radio booth, this 8-by-10-foot space is the control room, or, more appropriately, Souza’s gameday office. Computer monitors, a sound board and other technical equipment crowd the area, with cans of Diet Pepsi and Red Bull lining the ledge in front of the room.

The space is set up in a way that creates three main working areas. In the back of the room, two students control the TriCaster, a piece of equipment that switches the camera sources on the

videoboard. In the middle of the space is the digital broadcast coordinator, who directs the videoboard presentation, and next to him is the sound tech, responsible for keeping the audio levels of amplified sound at a happy medium. Up front, pressed against the glass overlooking the field, is the public address announcer who is seated next to his spotter, the person who identifies the players on the field. On the far left of the front row is Souza, sitting on the edge of a stool one moment and standing up the next. Donning a headset and holding his smart phone in one hand and a stack of papers in the other, he surveys the field and talks into his radio:

“Hold them or tell them to go faster.”

This is Souza in his element, giving direction and offering narration as he communicates with Gracin Johnson*, his marketing assistant, who is stationed on the Brooks Stadium turf. On this day, Souza and Johnson are directing traffic as 18 bikes from the Combat Motorcycle Veterans Association take the field for the Military Appreciation Day pregame festivities. From different vantage points, the duo makes sure the riders have an unobstructed path to the field as players, game officials, recruits, VIPs and event personnel crisscross on the sidelines and in the end zones.

On gamedays, to use another theater comparison, the marketing assistant functions as a stage manager, making sure on-field presentations and performances go according to plan while relying on Souza’s bird’s-eye view to make decisions and adjustments.

“With Alex in the ‘box’ and me on the field, he alerts me to things I can’t see, and I keep him informed of things happening in front of me,” Johnson says about their effective working dynamic.

Johnson’s input from the field is crucial to Souza’s decision-making process, and the same is true of the contributions of Dylan Richardson ’12 in the control room. Richardson is responsible for the videoboard presentation. Throughout the game, he and Souza work in tandem to make sure the right image is on the board at the right time. Whether it’s a replay showing the latest Chanticleer touchdown, images from the ever-popular flex cam, an ad from one of CCU’s corporate sponsors, or a hype video cued up to play just before the team runs out onto the field, Richardson’s team of camera operators and control room students make it happen. All the intricate elements that contribute to the gameday experience are essential to creating the kind of atmosphere that Souza hopes will help build a more populous #TEALnation.

“First and foremost, our No. 1 goal is to create new Chanticleer fans,” he says. “Our student-athletes deserve to play in front of lots of fans.”

In a day and age where attendance at collegiate events is falling victim to streaming options and television coverage, Souza is constantly thinking outside the box—not only to win back fans who are opting for the couch, but also to introduce Chanticleer Athletics to untapped members of the community. The drive to make a good impression on newcomers and to fill the seats is constant, but the stresses don’t stop there.

“I feel constant pressure because I want us to be first-class,” Souza admits. “I want the fans to be happy.”

Despite the best of intentions, Souza recognizes that it’s impossible to please 15,000 fans simultaneously. For every person in the seats who thinks the audio in the stadium is too loud, there will be another who finds it too soft. Some want to hear the band play more while others prefer the adrenaline-inducing beats from the stadium’s sound system. One calls for new gameday traditions, another pleads for the old ones to remain intact,

Souza believes the best course is to defer to the Chanticleer fans sitting in the north end zone bleachers.

“Students forever and always will define your atmosphere,” he says. “If they are having fun and going crazy, it will bleed at least five sections over.”

Follow the bleeding teal and you will find Randy Akers ’06 sitting in section 105. He’s a Coastal football fanatic who owns the popular Chanticleer message board coastalfans.com. Akers, who says he submits time-off requests from work six months in advance so he won’t miss a home game, takes gameday very seriously.

“I would say the gameday experience has improved tremendously [over the years],” says Akers. “It helps that a passionate alum like Alex is in charge.”

With the entire CCU community depending on him for a special experience at Brooks Stadium, it’s no wonder Souza feels the butterflies in his stomach every time he enters the control room.

He is able to put it all in perspective, however, when he thinks about the big picture. “Our role is really secondary,” he says. “It’s really about what goes on between the lines. The focus is on the student-athletes, and we are here to enhance the environment for them.”

As Brooks Stadium undergoes the second phase of its expansion and as the Chanticleer football program attracts continued interest by way of its FBS status, expect the athletic department’s emphasis on the gameday experience to steadily grow.

*Johnson left CCU to take another job before this article went to press. 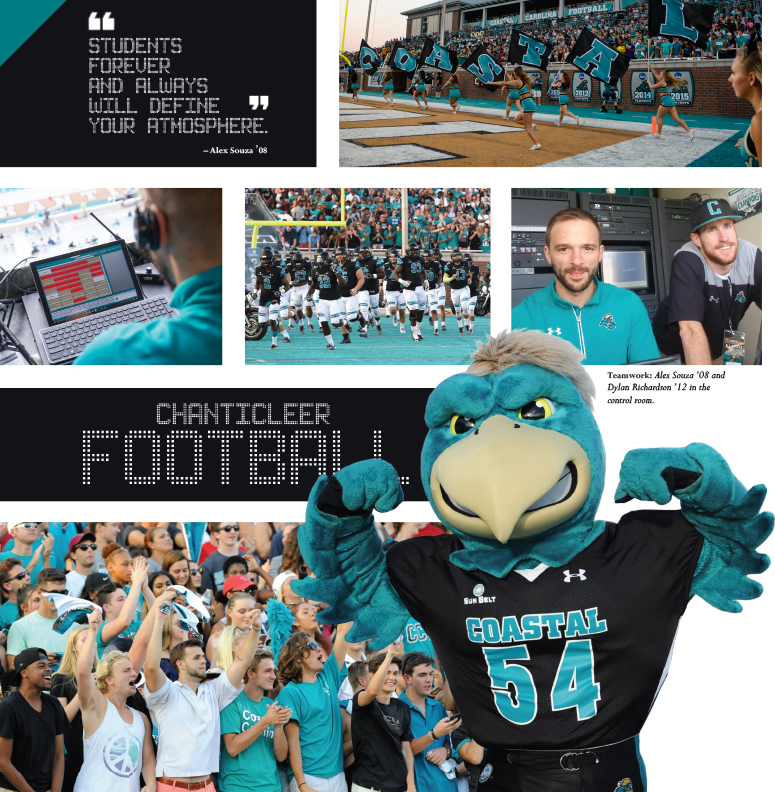