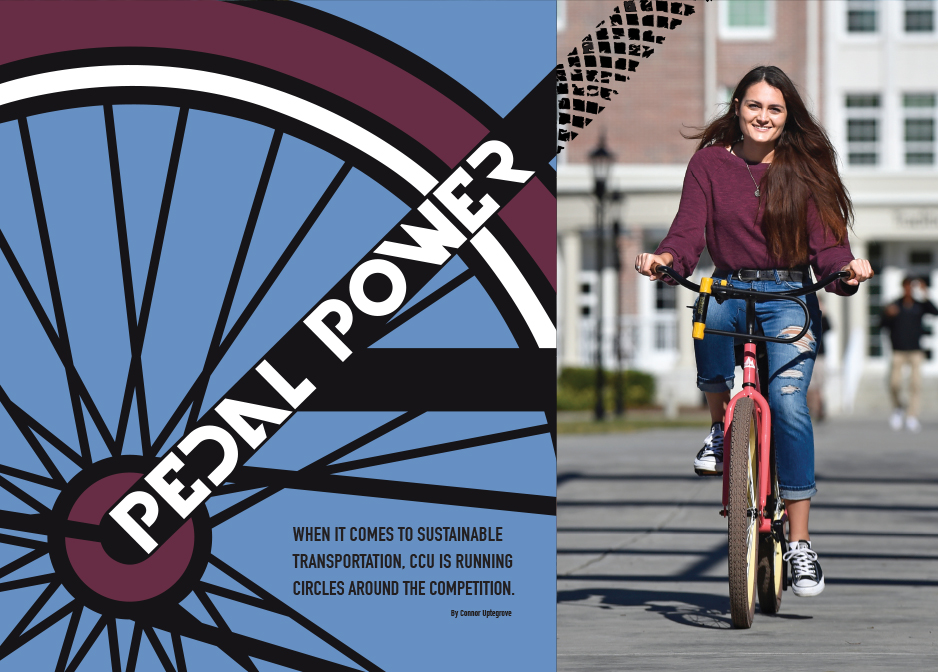 When it comes to sustainable transportation, CCU is running circles around the competition.
by Connor Uptegrove

One of the most remarkable developments in Chanticleer culture over the past five years has been the sharp rise in the use of bicycles as a popular—and environmentally sustainable—mode of transportation on the Coastal Carolina University campus.

Everywhere you look, there are students pedaling to and from classes, with bike racks full to overflowing outside classroom buildings and residence halls. No matter the season or the weather, bikes are ubiquitous.

There’s little doubt that this phenomenon has been fueled largely by Coastal Cycles, the bike rental program offered though the Department of University Recreation. In just eight years, this unique program has grown to be one of the largest offered by any American university. 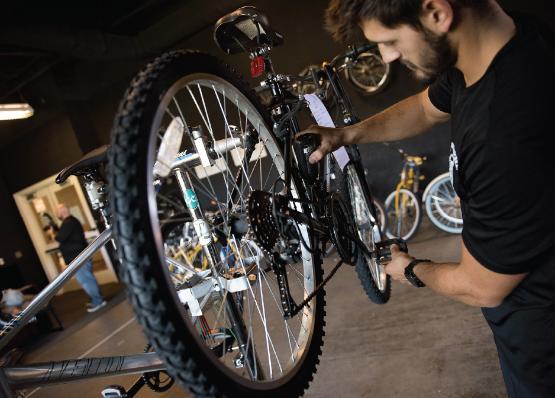 “If you told me 10 years ago that today CCU would have one of the biggest and best bike programs in the country, I would have laughed,” said Jody Davis, director of University Recreation.

Begun in 2010 with a small federal grant aimed at promoting sustainability, Coastal Cycles started out with just 21 bicycles that students could rent free of charge for two-week periods. The turning point in the program came in 2014 when Davis had the opportunity to purchase 200 bicycles direct from a manufacturer, saving money by bypassing the middlemen.

“We had been tracking requests for bikes and developing a waiting list,” said Davis, “so we knew the demand was there.”

But even Davis and his staff were amazed by the way the program has taken off since then. Today, the program offers 600 bikes that can be rented for free for 30 days at a time. Last year, these 600 bikes were rented out more than 3,300 times. CCU was named a bronze-status “Bike Friendly University” by the League of American Bicyclists in 2015.

Coastal Re-Cycles is miles ahead of bike programs offered at other colleges in the state and the nation, according to Davis, who has compared CCU’s program to more than 200 other U.S. universities. Students at Clemson University must pay $5 for a membership card to rent bicycles, and the College of Charleston offers daily rentals of only 16 bikes. The University of South Carolina, Francis Marion University and Charleston Southern University do not have bike rental programs. 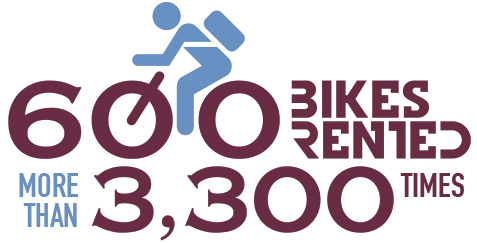 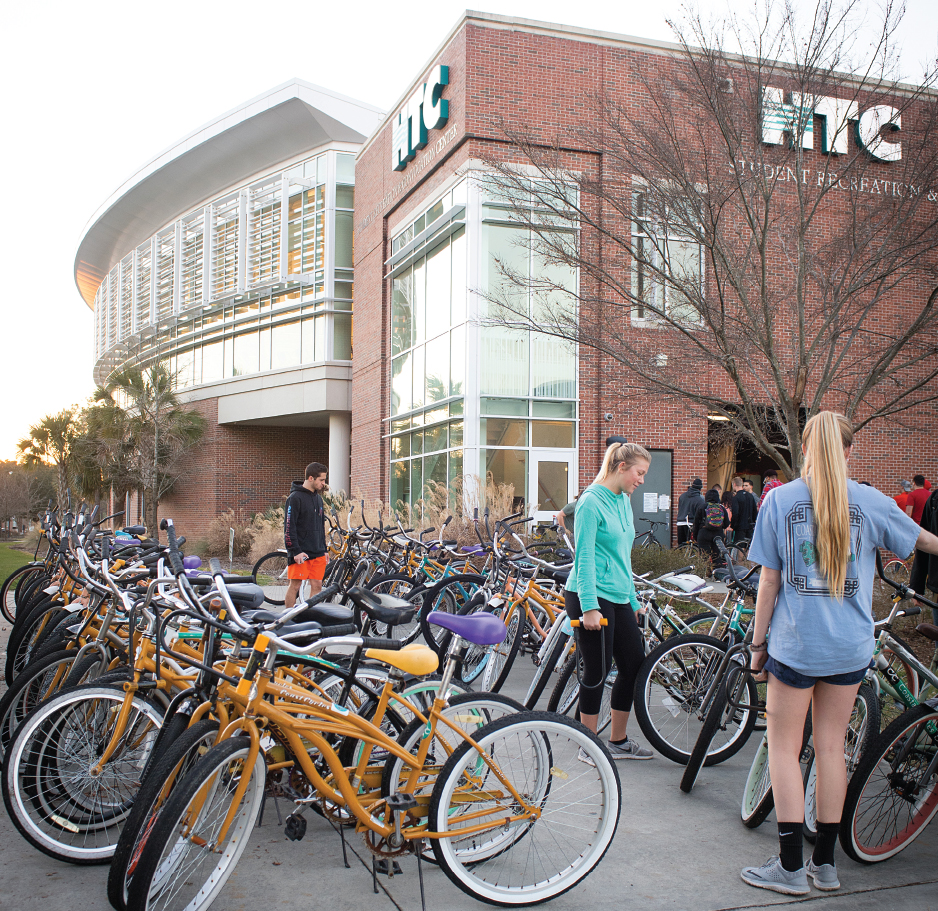 Pick and choose: At the beginning of each semester, students choose from Coastal Cycles’ 600-bike inventory.

Likewise, many elite universities with high bike amenity rankings like Stanford and Colorado State either don’t provide bicycles for students or charge a rental fee for using them. Some schools only allow free rentals for a couple of days at a time.

Beth Javener, outdoor recreation coordinator at CCU and supervisor of Coastal Cycles, estimates that all 600 bikes are rented between 98 to 100 percent of the time during the year.

Students may rent bikes for a 30-day period by presenting their CINO Card. University Recreation provides the bike, helmet, lock and an experienced team of 11 student technicians who keep the bikes in order and make repairs.

“Bicycling is one of the easiest, fastest and healthiest ways to travel, and it allows you to take control of your transportation,” said Javener. “Students have learned that if you control your transportation, you largely control your destiny.” Cycling allows students to bypass many of the headaches that campus commuters face, such as locating a parking space near class, traffic congestion or automotive breakdowns.

Many students use the bicycles as a way to commute to campus from University Place, the residence hall complex located about a mile from the main campus on S.C. 544. University Place resident Emily Rossi, a senior physical education major from Irmo, S.C., says she was surprised by the amount of time she saved by biking. “Not only did it give me five more minutes in bed in the morning, but I was able to save time and money by not driving to classes,” said Rossi.

Connor Brennan agrees. “It saves a lot of time, and time means everything in college,” said the freshman intelligence and national security studies major from Bowie, Md., who often rides his bike to the Walmart near campus. Students are not restricted to where they can take the bikes they rent, as long as they return them in good condition.

“It’s no different than checking out a library book,” said Davis. “Accountability is key to the program. Students know they have to be responsible.”

Students must watch a safety video and complete a survey before being issued a bike. 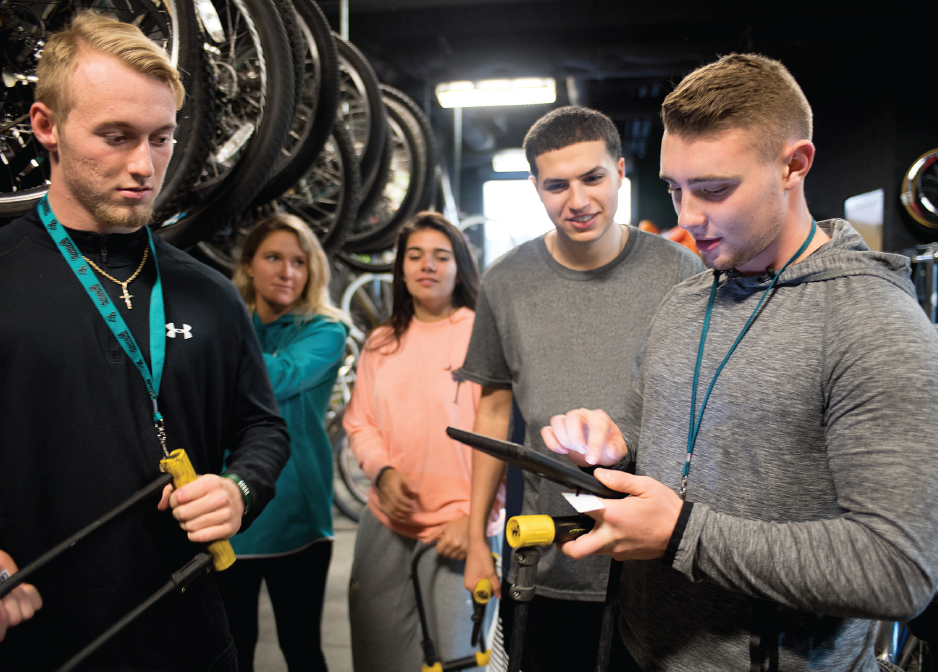 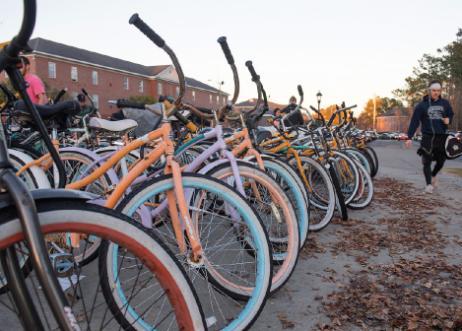 Bicycling is known to reduce an individual’s carbon footprint, which is the amount of carbon gases emitted into the atmosphere by driving cars that burn fossil fuels. It is estimated that each mile traveled on a bike instead of a car equals to around one pound of carbon dioxide that is kept out of the atmosphere, according to the Transportation Research Center at the University of California, Berkeley.

Some of the bikes used in the Coastal Cycles program have been recycled. In addition to the bikes purchased for the program, students and community members donate damaged or discarded bicycles, which are restored by student bike technicians.

Many students bring their own bikes to campus. A campus biking survey conducted last year by Outdoor Recreation and Sustain Coastal found that the number of bikes in use at CCU totaled more than 1,200. At present, there are 1,221 spaces for bike parking on the campus, including University Place and the Atlantic Center. The majority of slots (771) are on the main campus. While there are presently enough spots on campus to accommodate bike parking, the placement of bike racks is being re-evaluated. 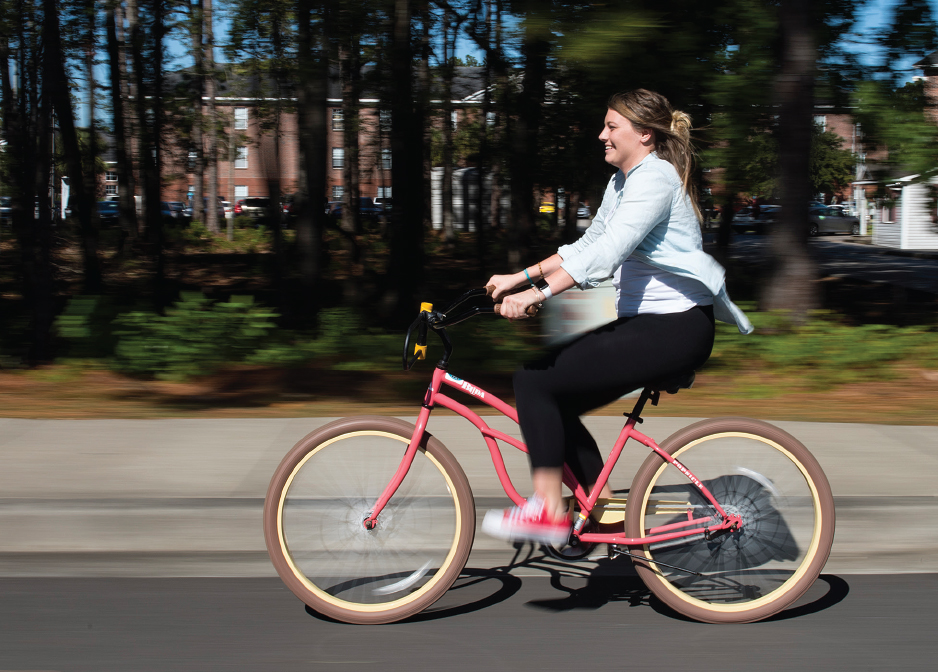 Biking issues that arise on campus are addressed by the Bike Advisory Council in University Recreation. The 16-member group, drawn from CCU faculty and staff and well as civic officials, meets monthly to discuss ways to improve biking on campus, and the committee is inviting students to join the discussion.

“The main goal of the program is not to provide a free bike for every student to use,” said Davis. “We want students to see that this is a healthy, sustainable alternative form of transportation. We hope they will invest in a bike of their own. It’s really about changing our culture. And if you just look around campus, you’ll see that is happening.”

Connor Uptegrove is a junior communication major and a student writer in the Office of University Communication.

“The Department of University Recreation encourages student engagement and success through participation in recreation to support the development of healthy and responsible individuals...”

In addition to sponsoring one of the best collegiate bicycle programs in the country, CCU’s University Recreation department rents out a wide selection of outdoor gear enabling students to develop their bodies as well as minds. 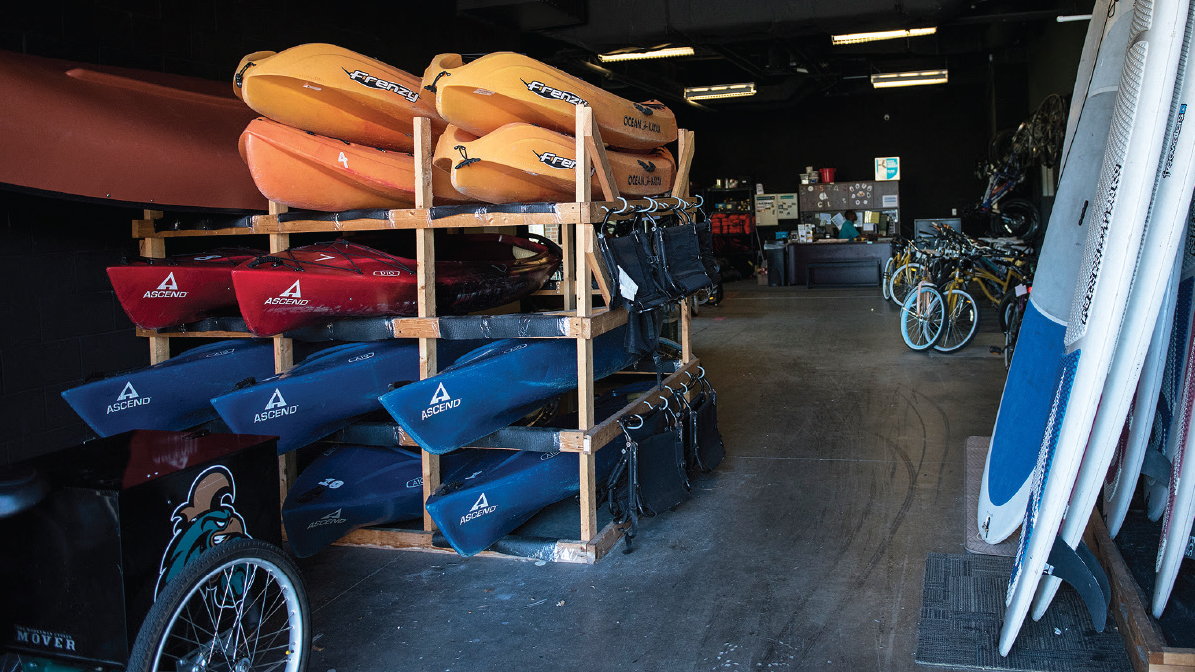 CCU’s Outdoor Center offers mountain bikes, kayaks, paddleboards and all types of camping and fishing gear at low costs. Some of the gear available for students, faculty and staff includes tents ($8 a day), sleeping bags ($5 a day), fishing poles and tackle ($6 a day), as well as backpacks, stoves and cook sets, headlamps, compasses, and eating utensils.

The Outdoor Center also organizes outings and events throughout the year. “We feel it is part of our mission to offer a variety of events that utilize our local geography,” said Davis.

These include kayak and stand-up paddleboard trips on the Waccamaw River and at Murrells Inlet and Waties Island; mountain bike rides around the Waccamaw Wildlife Refuge; and camping and whitewater rafting trips in the nearby North Carolina mountains. Trips to selected CCU athletic events are also offered through University Recreation.

Interest in these events has been so strong that new attractions are added frequently, according to Davis.