The Political, Cultural and Economic Ramifications of Latinx Immigration in Small Town America 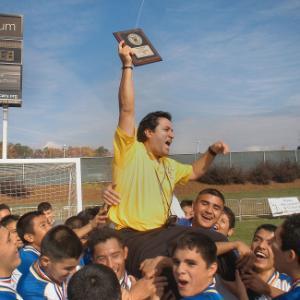 On Friday, April 26, the Grant Center for Real Estate and Economics teamed up with the HTC Honors College and Center for Interdisciplinary Studies, the Department of Politics, the Department of Languages and Intercultural Studies and the Kickoff Soccer Academy (KOSA), for a speaking event featuring Paul Cuadros, author of “A Home on the Field: How One Championship Soccer Team Inspires Hope for the Revival of Small Town America.”

Cuadros discussed the political, cultural and economic ramifications to latinx immigration in small-town America, specifically relating it to the content of his book, which was read by a group of honors students at CCU this semester.

"As the Latinx community grows, I am hopeful that people will be able to adjust and adapt to the change as we become a more pluralistic society. We might find great strength in that in ways that we hadn't imagined before," said Caudros.

Cuadros teaches a North Carolina high school soccer team known as “Los Jets,” a team that primarily consist of Latino players, some of which entered the U.S. illegally with their families. The book details the way the sport provided a supportive community for the players, while also creating a way for the local townspeople to accept them through shared pride over their athletic accomplishments.

After winning a state championship in 2005, the community began to support and accept the Latino players as fellow community members, something that was lacking prior to the team’s success.

Robert F. Salvino, director of the Grant Center, chose Caudros’ book as the required reading for his honors students this semester after one of his daughters was switched to a soccer team in Wilmington and he read a bio of her new coach online that mentioned the book.

“Soccer is an important part of my family and I have another daughter who works for a local Mexican restaurant,” he said. “My family recognizes that Latino families are here, yet we do not see them in the soccer clubs. In understanding why that is, we invited Paul Cuadros to share the story of the soccer team that he still coaches to this day and which is the subject matter of this book. It is a fascinating story and shows the ways that soccer, similar to other hobbies, can bridge the social gap between Latino and rural-American communities.”

The book will be incorporated into a reading group led by Salvino next semester.

“I do a lot of things that, half the time, my students probably wonder why I am doing it,” Salvino said. “What I will say is that it is important to make your work your life’s work. If you do this, good things will happen, you will enjoy what you are doing, and you will recognize things that you probably thought would never matter to you.”

“In KOSA, I have experienced a lot of the things that Paul mentions in his book,” said China Maja, coach and executive director of KOSA who is also a CCU graduate. “That is what sport does; it bridges the gap between the inevitable changes that happen in our country.” KOSA is a soccer club centered on the continued growth and development of youth soccer with an emphasis on player development

Cuadros is an award-winning investigative reporter and author whose work has appeared in The New York Times, The Huffington Post, Time Magazine, Salon.com, The Chicago Reporter, and other national and local publications. He joined the University of North Carolina as an associate professor of media and journalism in 2007. He worked with executive producer Jennifer Lopez on a documentary series “Los Jets,” available on TubiTV.com.