Thank you very much, [CCU board of trustees] Vice Chair [Natasha] Hanna for your charge and sincere thanks to Justice [Kaye] Hearn for administering the oath of office.

As I mentioned, my parents are not here but they did give me this Bible in 1980. I want to start with a verse. Today is December 14, and we are outside in this setting, and it’s unbelievable how blessed we are to live in South Carolina. This is Psalm 118:24, “This is the day which the Lord hath made; we will rejoice and be glad in it.”

I must admit, the oath in South Carolina is considerably shorter than the one I took at Eastern Kentucky University in October 2014. As you probably know, there are four Commonwealths in America: Pennsylvania, Massachusetts, Virginia, and Kentucky. The latter separated from the Commonwealth of Virginia in 1792, respectfully requesting that it be known as the Commonwealth of Kentucky. And the last part of its lengthy official oath of office – administered to every public official within the state – is reflective of an older time and tradition, and I quote:

. . .  I do further solemnly swear (or affirm) that since the adoption of the present Constitution, I, being a citizen of this State, have not fought a duel with deadly weapons within this State nor out of it, nor have I sent or accepted a challenge to fight a duel with deadly weapons, nor have I acted as a second in carrying a challenge, nor aided or assisted any person thus offending, so help me God.”

I am happy to say that still holds true in South Carolina. Again, thank you Justice Hearn for your brevity and economy of effort. 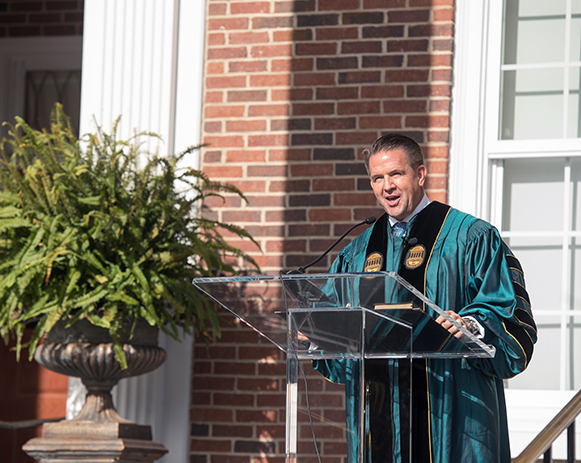 A sincere thanks to all those who have extended warm greetings and welcomes. I am humbled to stand before you today.

I want to especially thank [Student Government Association president] Brianna [Martin], because Brianna represents the reason we are here; and that’s our students. I am honored to serve as the third president of Coastal. In a short while, I’ll have the chance to deliver, if you will – a sort of inaugural address – to the real honorees of today: that’s our graduates. These ceremonies are not about Michael Benson. They are about our graduating students and the inspiring trajectory of this amazing institution. That my family and I have a role as historical markers along this path is truly an honor.

I would be remiss if I didn’t say a word or two of reflection and thanks before we make our way to the HTC Center.

We are assembled together in the shadow of the Singleton Building. Dr. Edward Marion “Dick” Singleton served first as director and later chancellor of USC Coastal Carolina College from 1963 until his retirement in 1983. Before coming to Coastal, Dr. Singleton was employed with the Conway Public School System as a teacher, coach, principal, and superintendent of the Conway Public Schools.

Michael T. Benson was sworn in as the third president of Coastal Carolina University during a ceremony held on the front steps of the Edward M. Singleton Building at 11 a.m. on Tuesday, Dec. 14. Benson took office on Jan. 1, 2021.

He was, literally, present at the creation of the institution, the one we know today as Coastal Carolina University. Writing of the experience in a memoir in the early 1970s, Chancellor Singleton reflected back on what happened when an intrepid group of townspeople gathered in 1954 to found a higher education institution.

He wrote: “It was a unified, determined effort by the populace to achieve a goal. The secret to this success story was that ALL the people of Horry County were involved. No big foundation led the way. The rich, the poor, the elite, the laboring; the intellectual and the deprived all have joined hands in a single effort.”

That is a beautiful statement and summarizes so beautifully, just as this gathering today is an inspiring cross-section of our community, the founding of this place was a collective effort by everybody. What happened here was the physical manifestation of a favorite quote of mine from George Washington Carver:

Start where you are, with what you have. Make something of it and never ever be satisfied.”

The founders started with what they had and made something of it. The implementation of their vision is all around us. And look at this campus; look at this day. Our task is to build upon that foundation and to never be satisfied. And that is exactly what we will do.

Thank you again for this singular honor … and Go Chants!