Coastal Carolina University’s (Coastal) current Strategic Plan, which was initiated in 2008, identifies key strategies based on a commitment to the vision, mission, and values of the Institution. Through the implementation of these strategies, the University will deliver on its vision to become the comprehensive university of choice in South Carolina. Consistent with the architectural style of the campus, the placement of these relationships symbolizes the importance of tradition as the University enacts its strategic plan. Key strategies include:

In Fall 2015, a committee consisting of a broad range of University stakeholders will be convened to develop the next University Strategic Plan.

Strategy 1: Meeting the Educational Needs of Students and the Community

Most Affordable Colleges Online
OnlineColleges.net named Coastal Carolina University one of the most affordable online colleges in South Carolina. The University was fourth on the list of fully accredited institutions that offer at least one fully online degree program.

Veteran Friendly University
For the sixth consecutive year, Coastal Carolina University has been designated a “Military-Friendly School” by G.I. Jobs magazine. This honor places the University in the top 20 percent of all schools nationwide as a university committed to educating military veterans. A total of 253 students receiving veteran educational benefits were enrolled in Fall 2014.

Addition of New Undergraduate Degree Programs
In an effort to meet the needs of students, Coastal Carolina University continues to expand undergraduate programs and specialized degree concentrations. The University offers 67 areas of study toward the baccalaureate degree with two programs, a B.A. in Digital Culture and Design and a B.S. in Engineering Science, currently pending approval by the Southern Association of Colleges and Schools Commission on Colleges (SACSCOC). The recently approved undergraduate certificate program in Sustainability will begin in Fall 2015.

Addition of New Graduate Degree Programs
Coastal Carolina University has continuously added new graduate degree programs and specializations with nine master's degrees currently being offered. Beginning Fall 2015, the University will offer a Master of Science in Sport Management and a graduate certificate program in English for Speakers of Other Languages (ESOL). Approval is currently pending for master's degrees in Information Systems Technology and Special Education.

Ed.S. in Educational Leadership
Beginning Fall 2015, the Spadoni College of Education will begin offering its second Educational Specialist (Ed.S.) degree, the Ed.S. in Instructional Technology. This 100 percent online program is designed for teachers and other professionals who have already earned a master's degree.

Ph.D. Program
The SACSCOC conducted a very successful accreditation review of the Ph.D. in Marine Science: Coastal and Marine Systems Science that concluded with no recommendations for the University. This resulted in a level change for the University from Level III (Master’s Degrees) to Level V (Doctoral Degrees).

60th Anniversary
Founders Day on September 22, 2014, marked the beginning of the commemoration of Coastal Carolina University’s 60th anniversary. A commemorative bookmark was designed and given to attendees at Founders Day. Other activities during the year included the President's 60th Celebration for faculty and staff and a special lecture delivered by retiring executive vice president and professor of politics, Edgar L. Dyer. 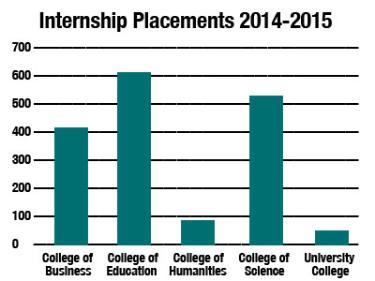 As a result of the University’s effort in supporting its Experiential Learning initiative, there has been a 15 percent growth in student internship participation for the 2014-2015 academic year. Students have been able to find internships related to their majors and career interests in the local area and have also worked with employers providing internships in major cities across the United States. Because of the growth and accessibility of the University’s international programs, the number of students participating in internships outside the U.S. has doubled in the last year. As employers continue to seek students with international experience, the hope is that many more will take advantage of these career development opportunities. During 2014-2015, there were 1,724 students who enrolled in academically supported internship courses.

Experienced@Coastal
Experienced@Coastal, the University's Quality Enhancement Plan (QEP) developed to bring experiential learning to the center of Coastal's educational culture, began in Fall 2012. To date, 108 courses have been approved as experiential learning courses. 854 sections of these courses have been taught with a total enrollment of 13,005 students.

ELS Center
The ELS Language Center opened on campus on April 27, 2015. The Center offers an Academic English program for international students who want to study at the University and other colleges and universities but who lack the level of English needed to be successful.

Student Housing Complex
The first two buildings of the $85 million residence facility that will house 1,270 freshman students is opening for the Fall 2015 semester. The four-building facility marks a new direction in student living with residence halls arranged in “communities” of four suites grouped around a common social space.

Retention Initiatives
To create an educational and co-curricular environment conducive to student achievement which promotes retention and graduation, the following initiatives have been introduced:

Chanticleers in Elite Company
Coastal Carolina University was one of only five NCAA Division I universities to have its football, men's soccer, men's basketball and baseball teams qualify for NCAA postseason play during 2014-2015.

Alumni Engagement
During the 2014-15 fiscal year, the Office of Alumni Relations hosted 52 events with 5,414 in attendance. Social media continues to be the most optimum way to interact with alumni as evidenced by the following statistics:

Atheneum Hall Alumni Center
Atheneum Hall was reconfigured to become the home of Alumni Relations and provide dining and meeting facilities for alumni events. Several areas of the building have been named, such as the Alford Dining Room, to recognize former chairman of the Board of Trustees and alumnus Billy Alford, the Pi Kappa Phi Patio, the Dan Sine Lobby and Veterans Hall. The newly renovated building was dedicated and reopened on April 30, 2015.

Center for Teaching Excellence to Advance Learning (CeTEAL) Programs
In 2014-2015, CeTEAL offered a total of 491 professional development sessions for faculty and staff with over 1,855 attendees across all sessions. An additional 200 one-to-one consultations were held with faculty members during this period. CeTEAL also offered a two-day New Faculty Orientation with 30 new faculty members in attendance for the Fall 2014 session.

General Compensation Increase
In January 2015, the President announced the approval of an additional 0.5 percent general pay increase for slotted and time-limited employees. The increase was the result of the University reaching the established goal of 65 percent freshmen retention. The first pay date for employees eligible for this general compensation increase was January 31, 2015.

Faculty and Staff Compression
Year two of the faculty and staff compression salary increases was funded in October 2014. The total dollar amounts disbursed was $504,097 to faculty and $207,465 to staff. As a result of this action, eligible staff will have received 66 percent of the total amount anticipated.

Independent Audit Findings
For the seventh consecutive year, the University received an unqualified opinion from external auditors Cline Brandt Kochenower & Co., P.A. for the annual financial statements from the fiscal year ending June 30, 2014. According to the audit findings, there were no significant deficiencies, material weaknesses or instances of non-compliance material to the financial statement.

Property Refinancing
In the early part of calendar year 2015, the University issued bonds in the amount $87 million to purchase University Place, a living community located half a mile from the University campus that houses 64 percent of all students in university housing. As a result, housing charges to students will not be increased in the foreseeable future.

Campus Master Plan
As part of the President’s pledge to guide the University in realizing its vision of becoming the public comprehensive university of choice in South Carolina, progress toward completion of the Campus Master Plan has continued and only one building on the plan has yet to be approved for design and construction. The remaining items on the Plan include changes to walking/driving patterns and infrastructure. A campus mobility study has been commissioned to address this issue. A campus-wide mobility task force has been convened and is addressing issues such as parking location by various campus groups, charges for parking, bike lanes, and safety concerns. An update to the Campus Master Plan has been requested from Sasaki Associates and its development is currently under way.

Feel the Teal Service Excellence Initiative
During the 2014-2015 academic year, under the direction of the President, the University continued its service excellence initiative, Feel the Teal. The primary objective of this service-driven initiative is to make certain that all individuals who interact with the University in any way – be that person a student, a member of the general public or Coastal employee – are treated with care, courtesy and respect. Under the President’s leadership, the following key elements were established as the foundation for the Feel the Teal Service Excellence Initiative:

CHANT411
CHANT411 provides a central point of contact for students, families, faculty, staff and visitors who want a question answered or need guidance navigating the University system. The goal of CHANT411 is to enhance the Coastal experience in the University community by providing first-class service and connecting individuals with the right resources. During 2014-2015, CHANT411 responded to over 21,000 inquiries from students, families, faculty, staff and community members. This represents a four-fold increase over the first year of the program’s operation.

As technology is ever-changing, the University must continually update existing technologies to allow for optimal success of students, faculty and staff. The following are highlights of recent expenditures intended to keep the University at the forefront of the technology curve: