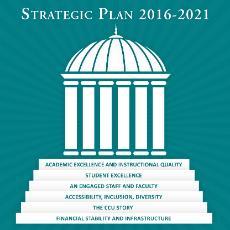 U.S. News and World Report Best College
CCU was ranked 62nd in the Best Regional Universities (South) category. CCU was also one of 15 Southern institutions that made the Best Value category, with a rank of 8.

Veteran Friendly University
For the eighth consecutive year, CCU was designated a “Military-Friendly School” by G.I. Jobs magazine. This honor places the University in the top 20 percent of all schools nationwide as a university committed to educating military veterans.

Addition of New Undergraduate Degree Programs
In an effort to meet the needs of all students, CCU continued to expand undergraduate programs. The University offered 70 areas of study toward the baccalaureate degree with two new Bachelor of Arts programs, in art history and anthropology and geography, beginning in the AY 2016-2017.

Trustee Award Recipients
Twenty May 2017 graduates received the $5,000 bonus Board of Trustees Award for earning their bachelor's degree in three years instead of the traditional four. This was the first class to complete the program.

Internship Opportunities
Internships continue to be an important component of a student’s overall academic experience at CCU, and the majority of the 70 undergraduate and 19 graduate programs offer credited internship courses. During AY the 2016-2017, 97 undergraduate and 27 graduate level courses connected students to an internship or practicum experience. A total of 2,177 students completed these academically-supported internship courses, a 12% increase over the previous year.

Undergraduate Research
Undergraduate research continues to be supported by the president. Highlights from 2016-2017 include:
• More than 100 student presentations (representing all University colleges and 22 different majors) were delivered at the CCU Undergraduate Research Competition in April 2017.
• CCU was awarded a $325,000 grant to serve as a three-year site for the Research Experience for Undergraduates program sponsored by the National Science Foundation.

Strategy 3: An Engaged Staff and Faculty

Center for Teaching Excellence to Advance Learning (CeTEAL) Programs
CeTEAL continued to offer innovative sessions and experienced an increase in attendance at sessions. Highlights include:
• 2,016 (duplicated) faculty served or "through the doors." In 2016-2017, 1,733 faculty were served which represents a 16% increase over 2015-2016.
• 363 sessions were offered, including 112 in instructional technology.

Fulbright Recipient
Casey Woodling, lecturer of philosophy was awarded a Fulbright Scholar grant for the AY 2016-2017.

Communications Climate Study
A communications climate study was conducted in Spring 2017 with the objective of obtaining information regarding the University community’s communication preferences and suggestions for improvement. Data from the survey will be used to create a communications plan that is in line with the goals and objectives of the 2016-2021 University Strategic Plan.

Chief Diversity Officer Position
A chief diversity officer position was established with the goal of having a qualified individual hired in 2018.

University Access Council
A standing committee was established and charged with completing an internal assessment to ensure a barrier-free environment. The key barriers to be assessed on an annual basis will include: financial, cultural, special needs and online/technical.

Academic Coaching – Office of Accessibility and Disability Services
Eligible students who are registered with Accessibility and Disability Services were invited to participate in an academic coaching program. There were 11 participants in Fall 2016 and 13 in Spring 2017. Most students participated in 10 or more weekly academic coaching sessions each semester.

Barriers to Use – Kimbel Library
A barriers to use inventory was taken and the following changes implemented:
• Development of a more accessible layout of library space.
• Implementation of the Universal Access Workstation.
• Revision of equipment load period policies for students to reduce overdue fines and increase equipment usage.

Fall 2016 Welcome Message
At the beginning of the AY 2016-2017, CCU President David DeCenzo and Student Government Association President Austin Nichols communicated to the campus community the vision for a campus that provides numerous opportunities for difficult but necessary dialogues to occur. Announced was the upcoming hiring of a chief diversity and inclusion officer and the establishment of a student organization team charged with building a network for promoting collaborative thinking and relevant work that is focused on student needs and solutions development.

Presidential Service Excellence Task Force
This task force was created with the goal of addressing four new strategic goals:
• Design and implement a comprehensive recognition program for faculty, staff, and student staff who provide service excellence.
• Identify and empower a team of faculty, CeTEAL and Training, Development, and Service Excellence staff charged with creating and implementing specific CeTEAL sessions that specifically address excellence in all elements of the teaching and learning process.
• Develop and commence the pilot phase of a student training program appropriate for student staff and student organization leaders during 2016-2017.
• Move to take the lead among all private and public, two- and four-year institutions of higher education by conducting the initial research and creating the framework for a national – and perhaps international – association here at CCU for professionals engaged in providing and studying service excellence in higher education to include professional standards, a clearinghouse of information and resources, consulting/ review services, and an annual CCU-hosted institute or symposium.

"I'M IN" Endowment Campaign
Under the direction of the president, a major endowment campaign for the University was publicly launched during an on-campus gala April 2016. The goal of the campaign is to increase the University’s endowment by $20 million by 2020. In doing so, the University will gain approximately $800,000 in new funds annually to support student scholarships and academic excellence. As of March 31, 2017, nearly $13 million had been raised.

Construction Projects
Major construction projects completed in 2016-2017 included the following:
• DeCenzo Hall (previously Teal Hall) and CINO Hall were completed and opened for students in Fall 2016. These are the last buildings of a major new housing complex constructed close to the core campus; the building completions added 1,274 beds to student housing.
• An academic classroom building which will provide additional instructional space for the computer science, psychology, and recreation sports management departments as well as the CCU honors program and Information Technology Services was completed and scheduled to open Fall 2017.
• Campus roads underwent a major overhaul on the core campus which involved the building of new cul-de-sacs, gates, speed bumps, interior driving lanes, and bike lanes in an effort to ensure safety for pedestrians.

Independent Audit Findings
For the eighth consecutive year, the University received an unqualified opinion from external auditors Cline Brandt Kochenower & Co., P.A. for the annual financial statements from the fiscal year ending June 30, 2015. According to the audit findings, there were no significant deficiencies, material weaknesses or instances of non-compliance material to the financial statement.