CINO (Coastal is Number One)

"Coastal Is Number One"

The chant is prominent, and the annual CINO Day is one of the highlights on the calendar.

From the moment that a student steps on campus to years after they have graduated, they are encouraged to wear teal on Tuesdays as a show of school spirit and as a way to connect members of Teal Nation, no matter where they might be.

The Atheneum is the recognized architectural symbol of CCU. There are numerous seals with the Atheneum logo situated on the ground around campus. A tradition among students is that you don't step on any of those seals. Stepping on one, it is said, will mean that you don't graduate on time.

A celebratory tradition surrounds the Beaty Memorial Victory Bell. The bell is located between Spring Brooks Stadium and Brooks Stadium. It sounds off when rung by students celebrating a victory on the field of play and also as graduates commemorate receiving their diplomas.

The victory bell was a gift from Pi Kappa Phi fraternity as a memorial for then-student Chad Michael Beaty, who died in an automobile accident in 1995. The fraternity raised more than $26,000 to construct a memorial and purchase the bell. Cast in 1893, the bell belonged to a church in Charleston, which is the founding city of the national fraternity.

One of the first and last traditions for students while they are on campus, involves having their photo taken with the bronze Chauncey. Chauncey, the University's mascot, is cast in bronze at the entrance to the TD sports complex. That life-sized figure has co-starred in many photos and selfies with new students and new graduates. ‌The Chanticleer ­– a proud and fierce rooster – is the unique moniker for Coastal Carolina University's mascot and athletics teams. The Chanticleer is derived from Geoffrey Chaucer's Canterbury Tales, specifically "The Nun's Priest Tale." In the early 1960s, Coastal's athletic teams were known as the Trojans until a group of Coastal students and their English professor-basketball coach Cal Maddox brought up the idea of a new mascot. It helped that the Chanticleer was from the same family of the animal kingdom as the Gamecock, the mascot of Coastal’s parent institution at the time, which was an important consideration in those days. Thus the Chanticleer was born, giving the growing college its own identity and one of the most unique mascots in college athletics. Read more »

‌‌See the evolution of the Chanticleer logo » 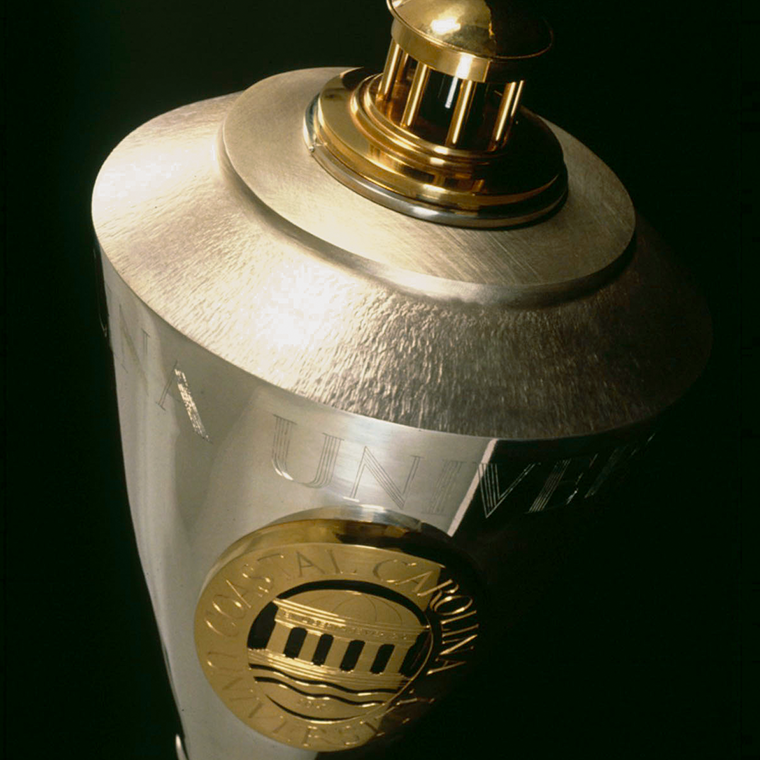 ‌Originally used as weapons during the Middle Ages, maces came to be symbols of authority and were adopted by officials of English municipalities by the end of the 16th century. Maces are now used for legislative assemblies, ecclesiastical processions, and at college and university ceremonies of outstanding importance, such as commencements. The University mace attaches significance to important events of the academic calendar and is carried by the senior member of the faculty to lead an academic procession. Commissioned by the Horry County Higher Education Commission, the mace was designed and crafted by silversmith Alfred D. Ward and presented to the University in Spring 1997. The three-dimensional 48-inch staff is topped with a 22-carat gold-plate model of the campus symbol, the Atheneum. Modified relief seals of the University and engraved lettering embellish the sterling silver cup. Supported by a base of solid walnut, the stem of the mace is adorned with sterling silver shells, reflecting the coastal location of the University. On the base of the stem is an engraved seal of the state of South Carolina, representing the University's status as a public institution. When not being used for a convocation, the University mace is on display in the boardroom of the E. Craig Wall Sr. College of Business Administration.

As symbols of events and affiliations, medallions in academic regalia can be traced to religious orders during the Middle Ages. Since many orders, societies, and universities used similar designs – a circle, an oval, or a cross – the detailed artwork in the center of the medallion was adopted to differentiate each affiliation. Colleges and universities traditionally use ceremonial and commemorative medallions for formal occasions, such as commencements, convocations and inaugurations, when academic regalia is worn. The institution's medallion was commissioned in 1994. The installation of the University's first president, Ronald R. Ingle on Oct. 22, 1994, was the first time the Coastal Carolina University Medallion was publicly displayed.

We come to you to lead our search,
and learn to reach beyond ourselves –
below the earth, beyond the stars-
to form our dreams for better years.

Here, green and bronze in nature; light –
sweet pine forests that surround us,
ocean waters that sustain us –
reflect your standards that prepare us.

May we return in thought and care
to share your promise of enrichment,
and celebrate and sing our praise
for Coastal Carolina.

We're the Chanticleers, tenacious and true.
We’ll fight until the end
For CCU!

We’ll compete with honor. And always to win.
Gather for our battle cry
And then…

We’ll shout our colors.
Go teal (Go teal!)
And then we’ll yell out
And bronze (And bronze!)

And every team will learn
Coastal is number one!
We’re the Chanticleers–
Defending the shore–
Best of Carolina
Since ’54.

Stronger than the oaks
And sure as the tide,
Our hearts are beating fast
With Coastal pride!

* The Coastal Carolina University seal, logos and wordmarks are registered trademarks; unauthorized use is prohibited by law. The seal and logos may be used for University-approved purposes only and may not be modified in any manner.