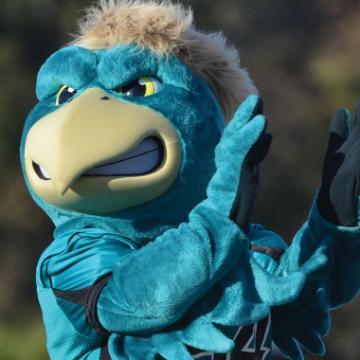 The Chanticleer ­– a proud and fierce rooster – is the unique moniker for the Coastal Carolina University mascot and athletics teams. The Chanticleer is derived from Geoffrey Chaucer's Canterbury Tales, specifically "The Nun's Priest Tale." In the early 1960s, Coastal’s athletic teams were known as the Trojans until a group of Coastal students and their English professor-basketball coach Cal F. Maddox brought up the idea of a new mascot. It helped that the Chanticleer was from the same family of the animal kingdom as the Gamecock, the mascot of Coastal’s parent institution at the time, which was an important consideration in those days. Thus the Chanticleer was born, giving the growing college its own identity and one of the most unique mascots in college athletics.

For the best description of Chanticleer, we turn to Chaucer's words:

For crowing there was not his equal in all the land. His voice was merrier than the merry organ that plays in church, and his crowing from his resting place was more trustworthy than a clock. His comb was redder than fine coral and turreted like a castle wall, his bill was black and shone like a jet, and his legs and toes were like azure. His nails were whiter than the lily and his feathers were like burnished gold.

As part of 2011 football Homecoming game, a new tradition began at Brooks Stadium when Maddox, the “live” mascot, made his debut. The new mascot received his name via student vote – and honors the legacy of former Coastal basketball coach and English professor Cal F. Maddox.

Note: Maddox (Callie Franklin Maddox Jr.) died Dec. 3, 2014, at the age of 79; his obituary included the following line: "He held positions at Coastal Carolina University (where he named the athletic mascot “Chanticleers” and where students voted to name their live mascot “Maddox”)...".

Read more about The Chanticleer »

A photo posted by Coastal Carolina University (@ccuchanticleers) on Aug 1, 2016 at 7:52am PDT

A photo posted by Coastal Carolina University (@ccuchanticleers) on Feb 17, 2016 at 8:10am PST

Evolution of the Chanticleer logo