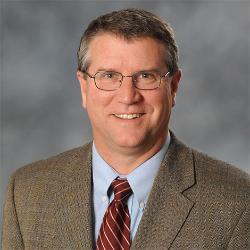 Rob Young, Ph.D., is the Associate Provost for Research and a Professor of Marine Science at Coastal Carolina University. In his role as Associate Provost, he oversees the Office of Sponsored Programs and Research Services and the Office of Undergraduate Research. He has been with CCU since 1992, and in that time has served as the department chair for marine science, the interim associate provost for grants and sponsored research, the director of undergraduate research, the director of the Quality Enhancement Plan (QEP), and the president of the South Carolina Marine Educators Association.

Young received his bachelor’s degree in biology from the University of Virginia and his doctoral degree in oceanography from the University of Rhode Island. As a faculty member in the marine science department, he mentored hundreds of undergraduate research students, 20 master’s student theses and has developed numerous marine and environmental education programs for students and teachers at all levels. His research and publications have focused primarily on the behavior, ecology and population biology of bottlenose dolphins and fishes in the southeastern United States, He has served as the state coordinator for the South Carolina Marine Mammal Stranding Network since 2008. In 2016, he was named the HTC Distinguished Teacher-Scholar Lecturer for CCU.