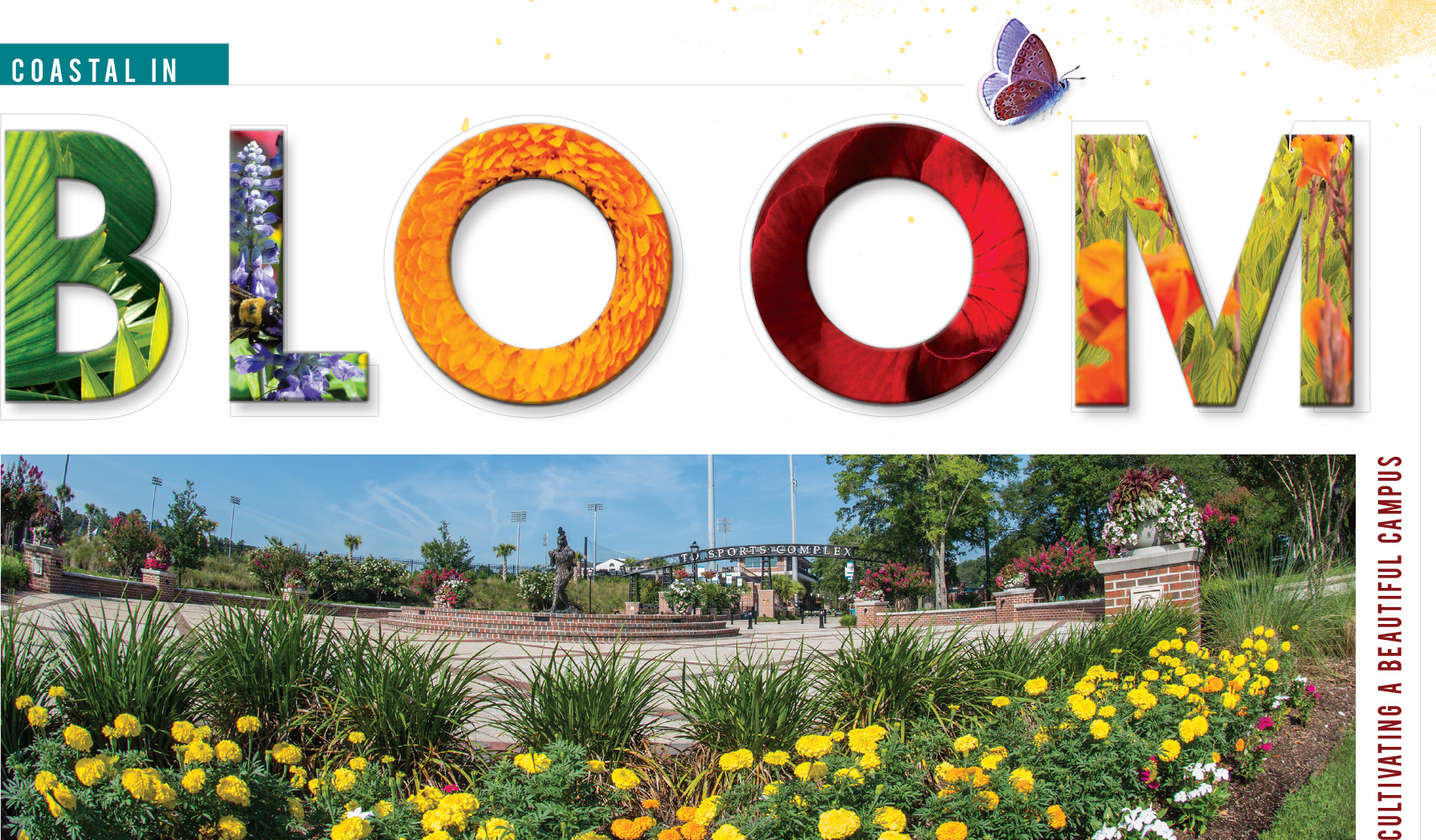 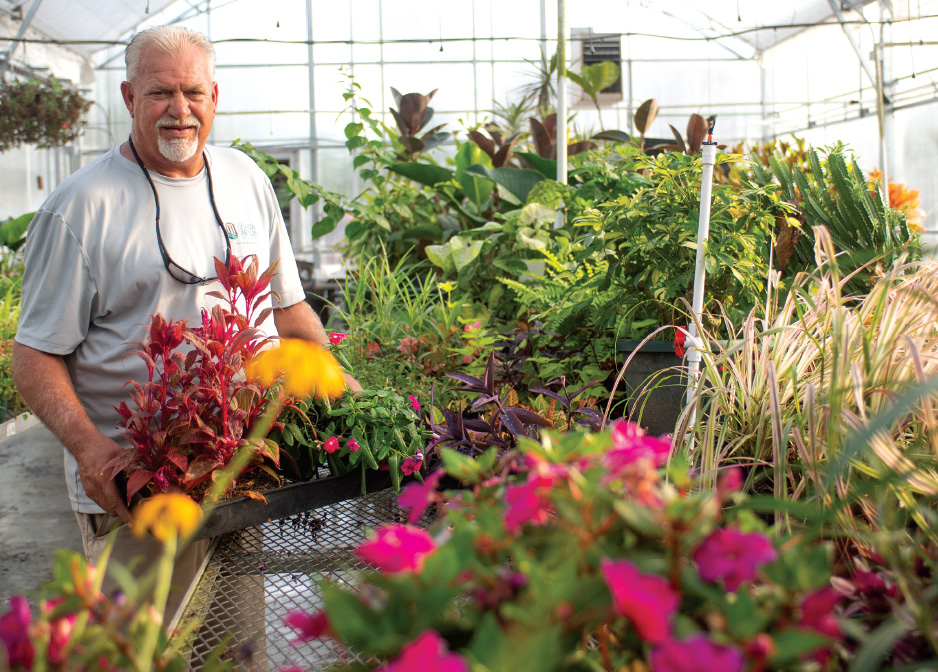 When you ask students why they decided to attend Coastal Carolina University, they often cite the beauty of the campus.

“My high school nurse told me her daughter came here,” said Kiki Sirett, a 2018 communication graduate from Allentown, Pa. “She wouldn’t stop bragging about how beautiful the campus is, and I can’t say she was wrong! I cried at every college visit I went on, except when I visited CCU. It had this amazing vibe, and the campus was beautiful.”

“Coastal’s campus is my favorite feature,” said Trevor Carver, a senior marine science major from Crofton, Md. “The campus is beautiful and even though school is stressful, there are many places to relax and get away from the hustle and bustle.”

I never get tired of walking through our campus because it is just so pretty,” said Sarina Stasi, a recent business graduate from Pine Bush, N.Y.

No matter the season, the Coastal campus is unquestionably an attractive place. Columned brick buildings are set among paths with flowering plants and trees under a canopy of pines and live oaks. In recent years, CCU has twice been named one of the top 30 Most Beautiful Coastal College Campuses by Best Value Schools.

The landscaping that makes CCU stand out from other campuses takes hard work and an unusual degree of dedication. The University Grounds department is responsible for all the trees, plants and flowers that line the courtyards, lawns and sidewalks of CCU.

Each of the 32 members of the grounds staff plays a role in creating and maintaining CCU’s landscape. They plant around 40,000 annual flowers a year—approximately 20,000 annuals are planted each fall and another 20,000 each spring. In the summer when temperatures soar, grounds staff members go through 1,000 gallons of water a day to keep the plants healthy. 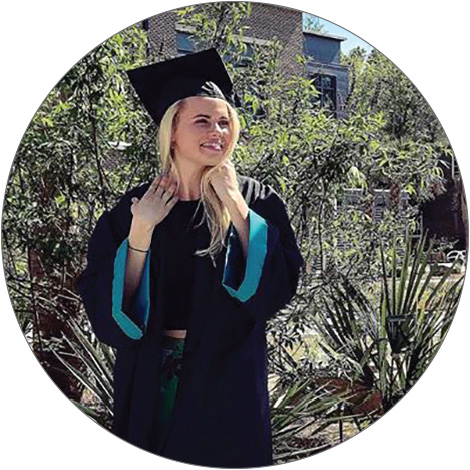 Every plant in every flowerbed and potted arrangement on campus was homegrown on site—a rarity for most university landscaping departments. The plants begin their lives as seeds or cuttings in the greenhouse located near DeCenzo Hall and the HTC Center. While CCU has had greenhouses for many years, the landscaping program took a major leap forward seven years ago when the University decided to replace the small greenhouse that was located behind the old admissions building. The large new greenhouse was built to handle the additional horticulture.

We get compliments all the time,” said Mills. “Somebody will stop me and tell me how nice it looks, and I give the kudos to my guys because they’re the ones doing [the landscaping].”

Growing the plants is just the beginning. It then takes teams of grounds people to haul the plants out to every edge of CCU’s 633-acre campus, plant them and keep them healthy through the seasons.

There is a sense of comradery among the grounds staff, and they appreciate each other. “They like to give credit to the greenhouse, but if it wasn’t for them planting it, it wouldn’t get done,” said greenhouse manager John Brong.

Assistant grounds superintendent James Mills is in charge of five crews. Each grounds person is responsible for designing, planting, fertilizing and maintaining the plants in an area of campus that they “own.”

Having each person in control of their own area fuels friendly competition. A few years ago, Brong had the campus sign shop make a trophy to give to the employee who created the best-looking area.

Grounds crew leader Ken Gawler says he loves his job because the “immediate impact” of the flowers he plants is rewarding.

Mike Hodges, a member of the grounds crew, has planted some 200,000 plants since he started working for CCU 10 years ago. In May 2018, for example, Hodges planted 1,400 pentas, a colorful annual flower, in a curving pattern on both sides of the brick walkway leading to the Atheneum.

A big part of our job is problem-solving, trying to find out what is beneficial or harmful in particular growing conditions,” said Hodges. “We’re at the mercy of the weather, so we are always working to keep the plants looking their best.” 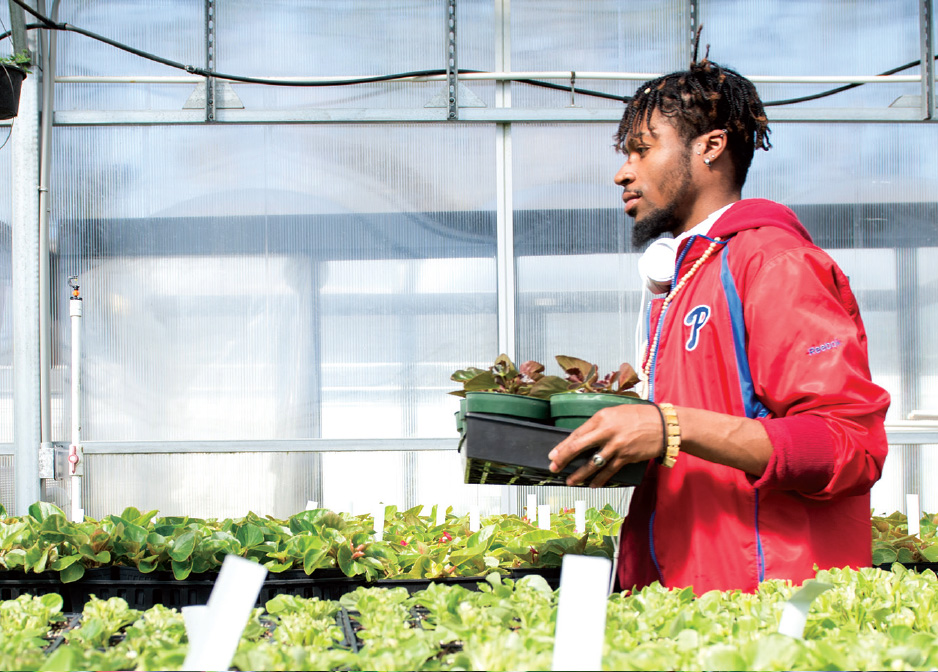 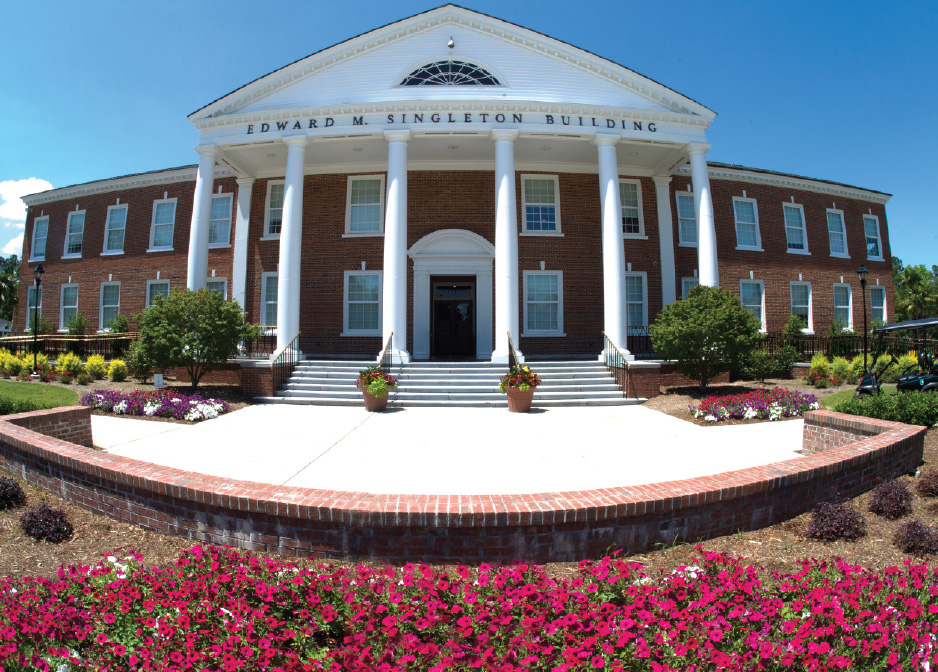 The Singleton Building displays the skills of the University grounds staff. 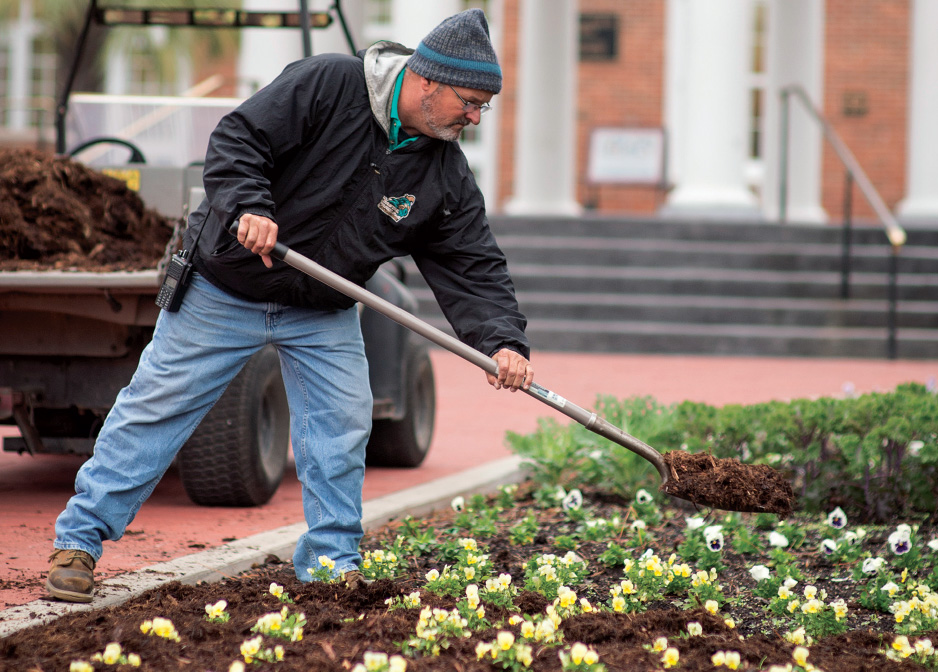 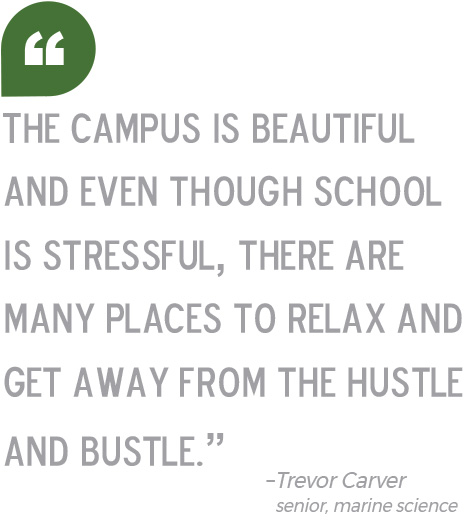 Grounds staff has help from about seven student workers during the academic year. Shannon Sweeney, who graduated from CCU in May 2018, worked with Brong at the greenhouse for three and a half years. A marine science major, she was genuinely interested in learning about the science of horticulture.

“John was the best boss I ever had,” said Sweeney. “He really cared about explaining to me what he was doing. Everything I know about plants I learned from him.”

“Being a student worker [at the greenhouse] was definitely the best job I had, and it really made my time at Coastal unique and special,” she said. “It was a privilege to work there.” 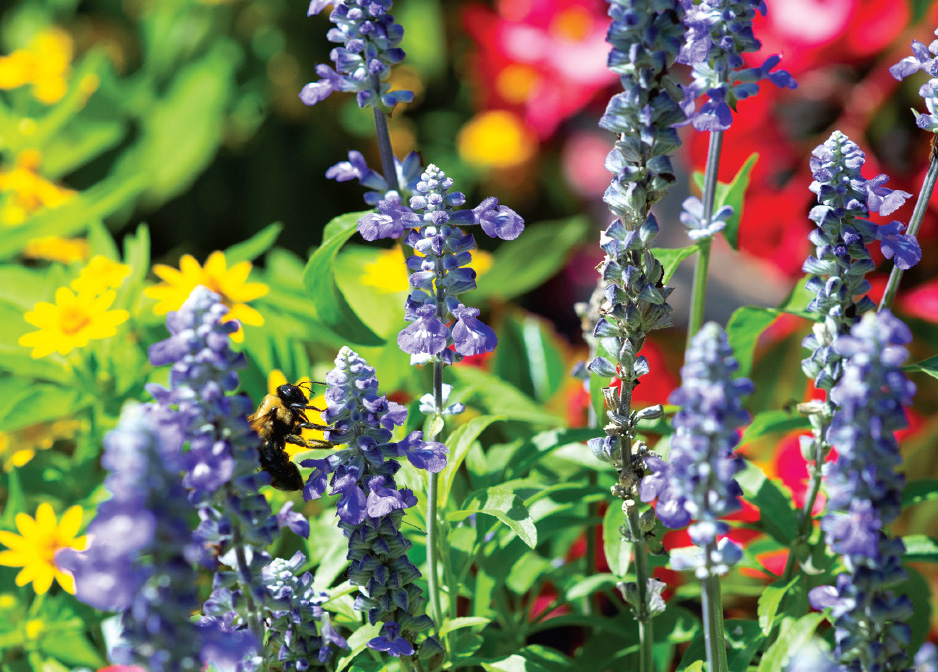 Pollination: Campus blossoms provide a feast for bees and other important pollinators.

Campus horticulture makes a significant impact on CCU’s sustainability efforts. According to James Luken, associate provost of graduate studies and professor of biology, the fact that there are still areas on campus with preserved forests is unique because most universities would remove trees to make room for buildings.

Luken says that the greenhouse’s method of propagation saves CCU money. Propagation is an inexpensive way to produce clones of plants from existing ones, which means CCU always has a supply of beautiful plants and flowers.

The grounds staff works closely with Sustain Coastal, the University’s recycling and sustainability initiative, to compost campus waste. “[Used] flowers are piled up over at the greenhouse and over time we let them [break down],” said grounds superintendent Tim Shank. Then it can be made into soil and used on campus.

Sustainability coordinator Jeremy Monday says that more than 200 tons of food scraps from Hicks Dining Hall, Chauncey’s Choice, CINO Grille and University Place Dining Hall have been processed since the composting initiative began in August 2015. CCU partners with a food waste hauling company called SMART Recycling, which transports the scraps to the Horry County Solid Waste Authority, where the material is converted into soil for flowerbeds around campus.

“Composting is certainly better than [the material] going to a landfill and creating methane gas,” said Monday.

Brong is proud that CCU made it on the Most Beautiful Coastal College Campuses list, but he has even higher hopes. “My goal is for CCU is to be the No. 1 campus in the nation as far as beauty.”

Nicole Pippo is a senior communication major and a student writer in the Office of University Communication.