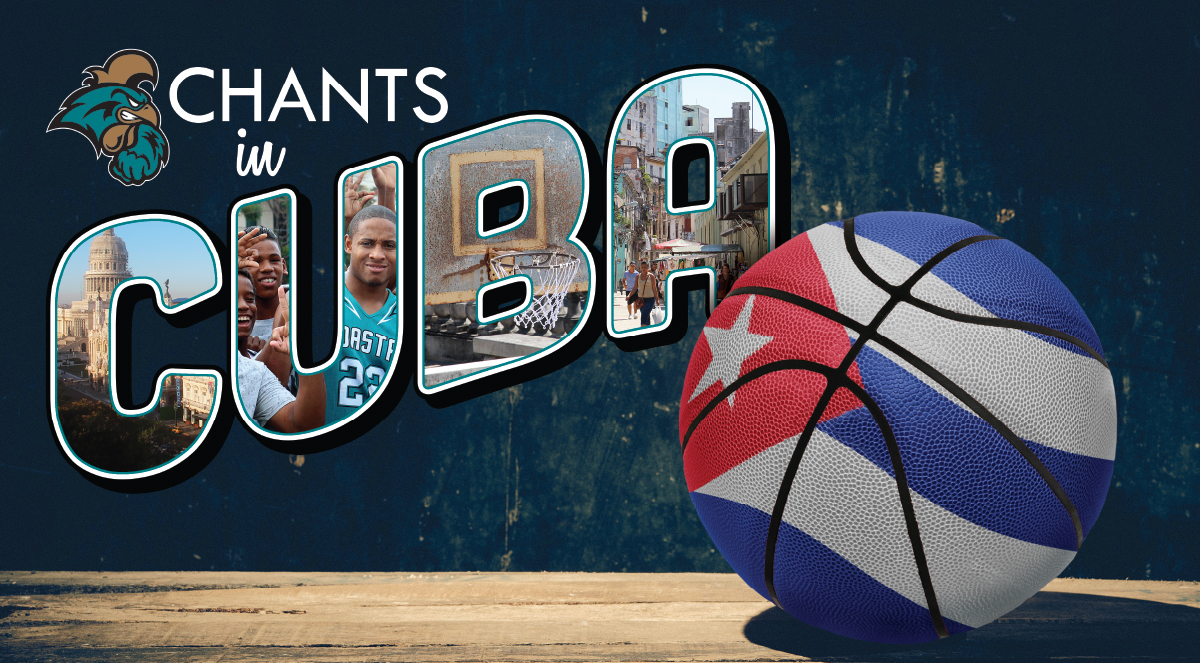 Arrival in Cuba and First Impressions

The Chanticleers boarded the flight to Havana at the Tampa International Airport. It seemed like a normal basketball road trip save for passports, extra forms and the Spanish language announcements by the flight attendants. Any sense of normalcy evaporated as soon as the plane’s wheels made contact with the tarmac in Havana. With that first screech of rubber on cement, there was loud applause and ruckus from the passengers on board—emotions of joy as native Cubans returned to their homeland to visit their families, some for the first time since leaving the island.

Once they arrived in the Havana airport, there was yet another form to fill out—a declaration of goods for the Cuban customs agents—before going through security. Although the luggage service was slow, the delay allowed the team travel party to observe some of the items that their fellow passengers were bringing into the country. These, all shrink-wrapped at the Tampa airport, ranged from pillows to bicycles to flat-screen televisions to track lighting fixtures.

The Chants then filed onto a bus destined for the Parque Central, the team hotel. Along the route, the bus passed the Sports City arena and several other eye-catching structures, including the city’s primary square where Fidel Castro spoke to the country during his rule and the site of Pope Francis’ recent visit.

Arriving at the hotel, the team was briefed on the evening’s itinerary by Coach Ellis. All student-athletes and most members of the coaching and support staff were then given 50 Cuban pesos—equivalent to roughly $4—to spend on a street vendor snack on the streets near the hotel. Getting food with Cuban pesos was much easier in theory than practice. Not only were the players easily identifiable due to their matching Russell Athletic polos, but the sight of nine men 6-foot-3 or taller drew attention from both native Cubans as well as tourists from other countries.

“The streets were filled with welcoming locals who always introduced themselves and smiled,” said freshman guard Christian Adams. “It was a great experience to see that even though they don’t have all the wealth and technology we have in America, it doesn’t affect their happiness.”

The Chanticleers played their three games against the Cuban National Team at the Havana Sports City, which is also the country’s Olympic training grounds. The arena itself was antiquated, with old light fixtures and individual window air conditioning units. The court was old and had been painted over several times—nowhere near the quality that the team is accustomed to at the HTC Center. Prior to the opening game of the series, the teams and coaching staffs continued the longstanding international tradition of exchanging gifts. The Chanticleers presented their hosts with polos and hats featuring the Chanticleer logo along with 40 new basketballs. The Cubans reciprocated with Cuban flag lapel pins.

The most unique aspect of the experience outside of the basketball lines was that neither the words “Coastal Carolina” nor “CCU” were displayed on the scoreboard or announced during introductions. Instead, the Chanticleers were called “Team USA” —no doubt an act of propaganda by the Cuban government and Basketball Federation, a fact that was not lost among the players or coaching staff.

“To see ‘USA’ on that scoreboard—Cuba vs. USA—was an emotional sight,” said Ellis. “For us to be representing the USA and to see that on television and watch the replay, it was pretty cool.”

For the games themselves, the Chanticleers lost all three—by scores of 76-68, 96-72 and 93-86—but received extended attention on ESPN’s SportsCenter in the process. It’s worth noting that the Cuban National Team is comprised of professionals whose sole jobs are to play basketball for the Cuban Basketball Federation. The players range from age 21 to 34 and are fully experienced in international play. They are the Cuban equivalent to Team USA, which features the best American players, including LeBron James, Kevin Durant, Russell Westbrook, Steph Curry, etc.

After the games ended, the Chanticleers held a trio of basketball clinics. The first featured the Coastal coaching staff—head coach Ellis, associate head coach Benny Moss and assistant coach Stacey Palmore—conducting a clinic for coaches from various levels of the Cuban National Team program and Cuban provinces. In the other two clinics, Chanticleer student-athletes taught skills and drills to youth players in Havana and Matanzas.

“Being able to teach and have fun with Cuban children at the basketball clinics was very rewarding,” said freshman center Josh Coleman. “The children here love the game of basketball. They really seemed to enjoy learning the steps, moves and basics of the game—passing, dribbling and shooting. Teaching Cuban kids the game of basketball made me feel great, and hopefully they felt the same way.”

At the conclusion of each clinic, the Chants gave the attendees T-shirts, basketballs and other gifts. Senior guard Aaron Law even gave the shoes off his feet to an underprivileged child whose own sneakers were worn out.

The Chanticleers were scheduled to return to the USA on Friday, Aug. 14. However, that morning U.S. Secretary of State John Kerry was scheduled to preside over the official ceremony to raise the United States flag at the American Embassy in Havana—a historic moment that Ellis wanted his team to experience.

With the help of Congressman Tom Rice, Ellis and the Coastal Carolina group tried to secure a place inside the U.S. Embassy gates in advance of the trip. When that didn’t work, Ellis tried again with a direct request the day of the ceremony. At first, he was told that only his coaches and two players would be admitted, but Ellis persuaded the U.S. security detail to let the entire team and travel party inside the embassy’s courtyard gates as American representatives to witness the historic moment.

“We were within 50 feet of John Kerry,” said Ellis. “It was an emotional experience. The three Marines who took the flag down in 1961 made good on the pledge to be there when the flag was raised again. It was a tremendous moment in history that I know some point in time our players will truly appreciate witnessing.”

“We were as close as you could get,” said junior guard Shivaughn Wiggins. “There were a lot of people outside the embassy, but we had the opportunity to be inside the gates. I truly felt proud to be an American as I watched the flag raised and heard the ‘Star Spangled Banner’ played.”

The Chanticleer contingent found that the real Cuba differs from the country presented by U.S. media. Yes, it is a land of great poverty that lacks the abundance and technology of fully developed first-world nations, but it is far from a third-world country. Cuba has a civic infrastructure that provides electricity, water

and Internet access—although limited and government-regulated. The country is even a popular tourist destination for the rest of the world, particularly western Europeans and Canadians. In addition, Cuba is known worldwide for its medical schools, and many African countries send their medical students there to study.

Walking the streets of Havana, it is easy to see what Cuba was before the Cuban Revolution. The architecture of the buildings is strikingly beautiful, and street art is abundant, with sculptures adorning nearly every intersection. The 1950s-era automobiles look brand new and give the city a kind of retro feeling. Even the Cuban capital building is directly modeled after the U.S. Capitol in Washington, D.C.

However, the average Cuban earns roughly $20 a month, barely enough to live on, even with the country’s cheap prices. Multiple generations of families share the same home. Overall, the country lacks the means to maintain itself. The impact of the communist Castro regime has left the nation without valuable resources and many basic items that Americans take for granted on a daily basis. Even the Cuban National Basketball Team struggles for resources, as demonstrated by a Cuban player asking Coastal’s Wiggins for his shoes after the first game. Needless to say, Wiggins obliged.

“They don’t have much over there,” he said. “He asked me for my shoes, and I had an extra pair so I decided to give them to him because he needs them more than I do.”

Despite the poverty, the Cuban people are very welcoming, jovial and appreciative of what they have. “It was a great learning experience to see how different America is from Cuba,” said junior guard Elijah Wilson. “They’re kind of stuck back in time in terms of the cars, how they do things and how the businesses look. Going there, you really learn to appreciate what you have here in America. We really do have a lot compared to them. We’ve got to learn to appreciate what we have.”