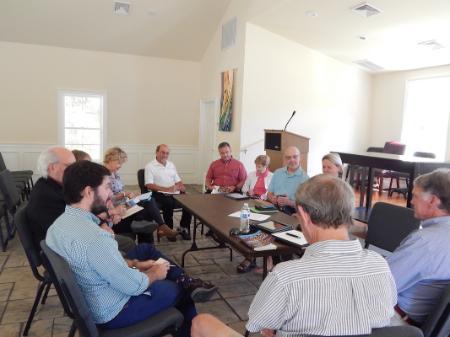 The Community Conversation Initiative, an outgrowth of the 2015-2017 Lackey Chapel Social Justice Meetings, is a project supported by Coastal Carolina University's Jackson Family Center for Ethics and Values.

“Religion, Terror and Error: US Foreign Policy and the Challenge of Spiritual Engagement”.

We decided at our last meeting on May 9 that we will be discussing the work of the International Center for Religion and Diplomacy for the first 6 sessions of the fall.  This Center is located in Washington, DC.  While not itself a religious organization, ICRD builds the skills, capacity and ranks of women and men peacebuilders of all faiths to address the root causes of identity-based conflict and violent extremism in their communities.  After two decades of direct engagement, ICRD is a preferred partner among government, civil society, and grassroots organizations for conducting trainings, developing local networks and facilitating multi-track initiatives to resolve many of the critical crises affecting the globe today.

Dr. Douglas M. Johnston, Jr. is the founder of ICRD.  He was educated at the Naval Academy and Harvard University and has had a distinguished career in the public and private sectors. He was the founding director of Harvard's Executive Program in National and International Security.  He has guided ICRD's efforts to bridge religion and politics in support of peacemaking in Sudan, Kashmir, Pakistan, Afghanistan, Iran, Syria, Yemen and Saudi Arabia.

We will read and discuss his book, "Religion, Terror, and Error: US Foreign Policy and the Challenge of Spiritual Engagement".  This book won the 2011 "Book of the Year Award" by Foreword Reviews, the rating agency for universities and independent publishers.

How should the United States deal with the jihadist challenge and other religious imperatives that permeate today's geopolitical landscape? Religion, Terror, and Error: U.S. Foreign Policy and the Challenge of Spiritual Engagement argues that what's required is a longer-term strategy of cultural engagement, backed by a deeper understanding of how others view the world and what is important to them. The means by which that can be accomplished are the subject of this book.

The work realizes three important tasks. It shows how the United States can reposition itself to deal more effectively with the causal factors that underlie religious extremism; offers a successor to the rational-actor model of decision-making that has heretofore excluded "irrational" factors like religion; and suggests a new paradigm for U.S. leadership in anticipation of tomorrow's multipolar world. Describing how the United States should realign itself to deal more effectively with the factors underlying religious extremism, this innovative treatise explains how existing capabilities can be redirected to respond to the challenge and identifies additional capabilities that will be needed to complete the task.