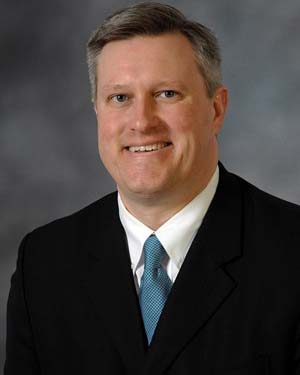 Matt Hogue was named vice president for intercollegiate athletics and university recreation at Coastal Carolina University in 2021, after serving as director of athletics since 2015.

Hogue joined Coastal in 1997 and has served in several different roles in the athletics and in the Office of University Communications, where he led CCU's marketing and trademark-licensing efforts as associate vice president of marketing.

Hogue was well known for his 17-year stint as the "Voice of the Chanticleers" on the Chanticleer Sports Network. His colorful, exciting calls were synonymous with Chanticleer athletics. A 25-year broadcast veteran, Hogue built a diverse play-by-play resume that includes stints with USC's Gamecock Radio Network, Minor League Baseball and appearances on regional TV including Fox Sports Net, SportSouth and ESPN properties. He also served as the broadcast voice of the Big South Conference's basketball TV package.

In 2013, Hogue was named a finalist for the National Sportscasters and Sportswriters Association (NSSA) Sportscaster of the Year for the state of South Carolina. He has edited a book entitled Chanticleer Athletics: Fifty Years of Excellence with other CCU contributors and dedicated the book to Edward M. "Dick" Singleton, former chancellor of the University. Partial proceeds from the book benefited the Edward M. Singleton Scholar Athlete Award scholarship at CCU.

Hogue earned his baccalaureate degree from the University of South Carolina and completed his MBA from Winthrop University. He and his wife, Laura, live in Conway with their daughters Rachel and Caroline.