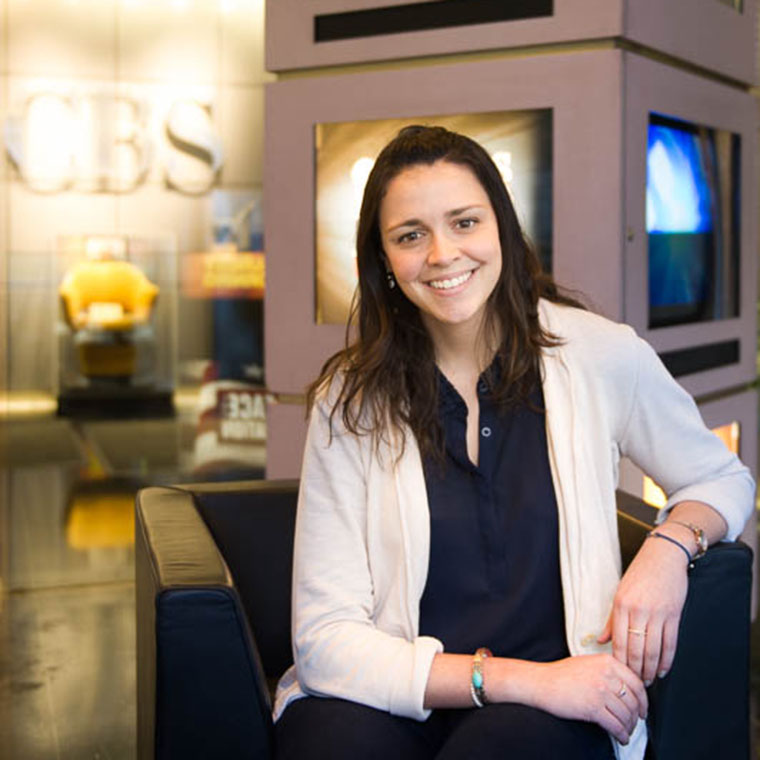 I was lucky to have a series of exceptional professors at CCU...

Meghan Laffin ’14 is quickly making a name for herself at CBS News, just as she did at Coastal Carolina University.

She undoubtedly left her mark on campus while earning a bachelor’s degree in business management with a minor in journalism. Her accomplishments include being named the 2013-14 Presidential Student-Athlete of the Year, which is presented to the student-athlete who displays extraordinary achievements in academics, athletics, community service and leadership, and earning the 2014 Ronald D. Lackey Service Award. She was a member of the University Honors Program and the Wall Fellows program. In addition, she was active in WCCU Radio, Student-Athlete Advisory Committee, Golden Key International Honor Society and was captain of the volleyball team, to name a few.

“I was lucky to have a series of exceptional professors at CCU, but I think the broad scope of balancing a heavy course load with athletics and community service is what really taught me to excel,” said Laffin, a native of Long Island, N.Y. “The Wall Fellows program expanded my classroom experience to real-life scenarios. Dressing in business casual every day, meeting with local businesses and organizing charity events. Planning trips overseas and developing relationships with friends and advisors who offered constant support and advice. The program taught me to apply my classroom learning to the professional world, especially when it came to finding an internship and deciding which passion to pursue.”

After interning at CBS to help fulfill her degree requirements, Laffin was later hired on a full-time basis. She began by learning the fundamentals and then moved to shadowing producers and assisting with major projects. From there, she learned how to produce live shots with reporters in the field, took an opportunity to produce the ‘Eye Opener’ segment on Saturday mornings, and then was asked to switch to the control room, where she now serves as a broadcast associate.

“I work for CBS This Morning with Charlie Rose, Gayle King and Norah O’Donnell,” Laffin said. “My primary focus is coordinating live segments. I’m the one in the control room deciding what video, images or graphics to show during a conversation. It is my responsibility to predict where the conversation may go and what visual elements are needed to follow. My goal is to someday produce major investigative or feature tape pieces. Like the type of stories you see on 60 Minutes or Sunday Morning.”