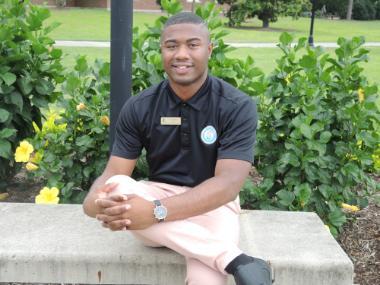 Eriq Bruce’s big moment came this past April when the Coastal Carolina student body voted him the next Student Government Association (SGA) president. From Dillon, S.C., it was another achievement in the undergraduate career of a young man who credits CCU with “opening a lot of doors for me.”

Wanting Coastal students to know that “SGA is here for them,” Eriq is a leader who interacts directly with his constituents. Accessible and humble, Eriq has a genuine desire to help his peers. Describing himself as “ambitious,” you can gather that he has big goals for his presidency.

But don’t think the office has changed the top SGA leader. Eriq stresses it is important to always be yourself, whether you are representing 10,000 students or not. With plans to perhaps run for public office in the future, that attitude will surely win over voters looking for an honest representative.

With plans to attend graduate school for a public administration degree, Eriq is grooming himself for a long and successful career in the public eye. Keep an eye on him, our current student leader of today is shaping up to be a major leader of tomorrow.

How did you hear about Coastal?: I was first introduced to Coastal at my high school.

Why did you come to Coastal?: I decided to come to Coastal because I wanted to be a Chanticleer and also because of the numerous opportunities available.

Favorite aspect of living in the Conway/Myrtle Beach area?: The area reminds me of a mini city and I love it.

Plans after graduation?: After graduation I want to attend graduate school and earn my degree in public administration and work with the public. I also have aspirations to run for public office.

What are your hobbies?: I am a very good thrifter.

Bonus Info:  I enjoy people. I live to inspire others, guide, and also lead others. One of my favorite quotes from Jackie Robinson is, “A life is not important except in the impact it has on other lives.”