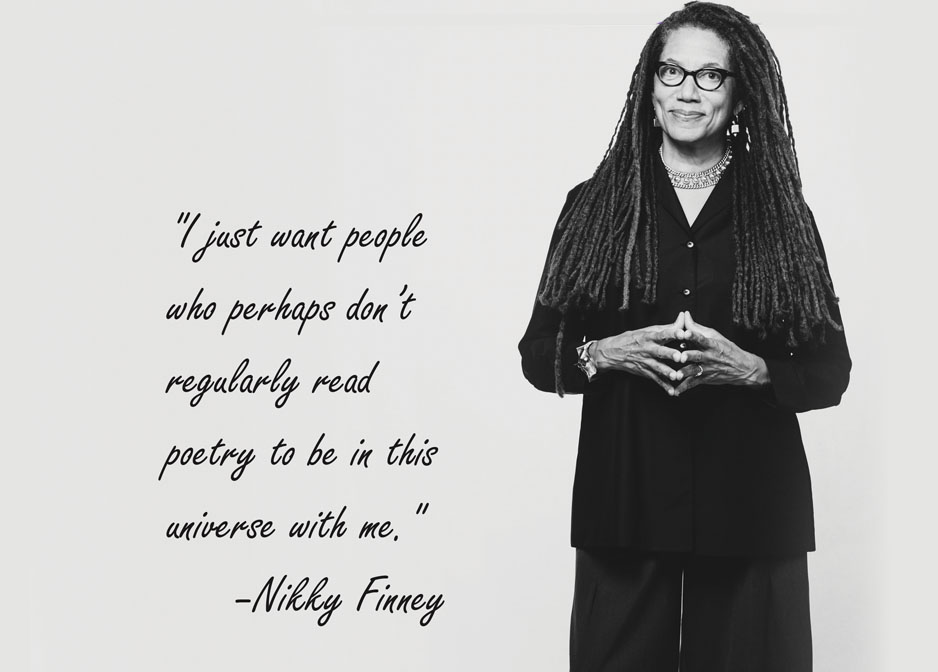 She may be the only artist in history to turn a fishmonger into a superstar. With her poetry.  Who does that?

Conway native, author, educator and activist Nikky Finney, winner of the 2011 National Book Award for her work Head Off & Split, returned to the area in April 2018 for a homecoming weekend celebration that highlighted both her roots in the Gullah Geechee community and her achievements as a poet and scholar.

With a voice equal parts earnest and captivating, Finney’s Friday night address conveyed gratitude for the homecoming occasion, reflections on the writing process, insights and context on several of her poems, and perspective on the place, power and purpose of poetry in 2018.

Hosted jointly by Coastal Carolina University, the city of Conway, and CCU’s Charles Joyner Institute for Gullah and African Diaspora Studies, the Finney homecoming celebration achieved a full blending of the communities, bringing the Whittemore Park Middle School orchestra to the stage in Johnson Auditorium; the mayor of Conway, Barbara Blain-Bellamy, to the steps of city hall to present Finney with a key to the city; and members of CCU’s Athenaeum Press to Whittemore Park Middle School, the site where Finney’s grandfather served as longtime principal of Whittemore High School, to record oral histories with the school’s alumni. In addition, Finney gave the inaugural reading of “Conway,” a poem commissioned for the homecoming occasion.

Veronica Gerald, assistant professor of English, director of the Joyner Institute and facilitator of the event, welcomed Finney to the stage Friday evening.

“We’re welcoming Nikky Finney because she is known globally but not so well in her hometown currently,” said Gerald, “and it’s like the old people say in the Gullah culture: ‘‘You gotta know who yah dah.That’s your whole ancestry – where you’re from, what street you grew up in, who your people are. So, we wanted to show Conway who she dah.”

Hastings Hensel, poet and lecturer in the Department of English, held an interview with Finney Friday afternoon as an open class for CCU’s Master of Arts in Writing (MAW) students.

“It was inspiring, both as a writer and as a teacher, to have her here,” said Hensel. “I already knew she was a great ambassador of poetry and of empathy, but she’s also a great speaker and a great South Carolinian. It was a neat overlap of the University and the community.”

Finney’s poetry, often centering on themes and situations from her background blended with images of the natural world, includes references to political and historical events rife with injustice. As a poet, Finney wishes to achieve truth and beauty but, simultaneously, she believes that “everything is political,” and as Hensel notes, “[Finney] is great at bringing the personal and the political together.”

“Poetry and art is about something beautiful,” said Finney. “I don’t want to jump up on this table and rant about all the things I believe or all the bad things happening in the world. What I have to do is take those things and create and craft and make something.” At the same time, Finney emphasized, understanding has a place in the center of confrontation.

“I don’t think you just get to speak your mind,” said Finney. “You don’t just throw stones and run behind a tree. If I say something, then I say it in a spirit of truth and revelation, and I stick around for the conversation afterward. Justice and tenderness is something that I care very much about as a writer and a poet.”

Finney’s direct connection to the late Charles Joyner, Distinguished Professor Emeritus of Southern History and Culture at CCU and namesake of the institute, occurred when she was researching her second book of poetry, Rice, in 1985. Finney contacted Joyner in relation to his seminal work, Down by the Riverside.

“I asked him some questions about South Carolina history,” said Finney, “and I had some wonderful conversations with him about that. Then we went down to the ocean that day and had a Lowcountry boil and celebrated in that way.”

As an author and an educator, Finney believes poetry should have a relevant, accessible place in human interaction and that it does its best work when “we take it to places that usually don’t invite it in.” She emphasizes its timeliness though measures such as a class she taught in Spring 2018 at the University of South Carolina, where she is the John H. Bennett Jr. Endowed Professor of Creative Writing and Southern Letters. The course was titled “Langston Hughes to Kendrick Lamar” and focused on the threads of culture and context for black artists throughout history.

“I’m looking at 100 years of black poetic expression in America, and my students are on fire because they love Kendrick,” who, coincidentally, won the Pulitzer Prize during the course of that semester. “They love Kendrick Lamar, and they’re teaching me about him while I’m teaching them about Langston Hughes, so there’s a symbiotic relationship in the classroom,” said Finney.

It’s this student-as-teacher dynamic that Finney continuously seeks, as her ultimate goal is for students to become autodidacts.

“When a teacher is not present, how do you teach yourself?” asked Finney. “The most important thing that I can be as a teacher is a student. I have got to let my students know I do not know it all. I am not one of those kinds of teachers. In fact, I am less that kind of human being and teacher and more a curious human being who is now autodidactic and also looking for the next poem, the next way to make myself better, the next way to pass on information to somebody who might need it.”

When Finney’s work Head Off & Split won the National Book Award for poetry in 2011, visitors from all over the country descended upon Liberty Street Seafood, the fish market in Sumter, S.C., that Finney references in the work’s title poem. Finney still visits the market when she’s in the area, where the fishmonger of her childhood has passed the business on to his son. The first time Finney visited following the award, she found newspaper clippings papering the shop’s walls, and while she hoped she could visit unnoticed, the fishmonger recognized her immediately.

“Miss Finney, you’ve made me a superstar!” the man cried.

That’s the power of poetry. 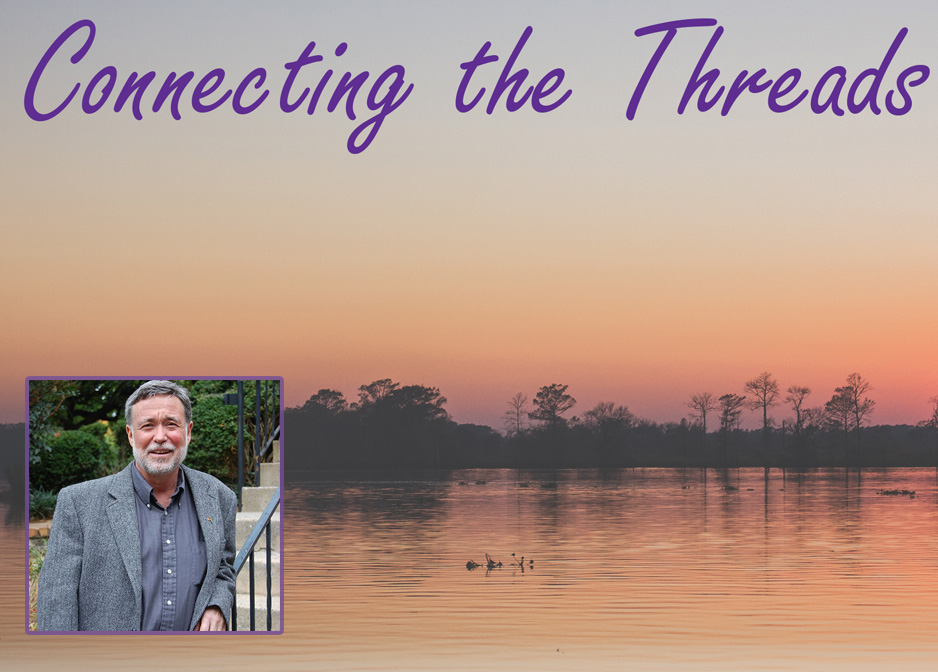 In November 2017, American Gullah historian Joseph Opala became the first scholar-in-residence for Coastal Carolina University’s Charles Joyner Institute for Gullah and African Diaspora Studies, established in 2016. The month-long residency included lectures in the fields of anthropology and history, class visits, participation in Gullah community events and research-focused work with students and faculty of the Joyner Institute.

Opala is known for his research on the “Gullah Connection,” the long historical thread linking the West African nation of Sierra Leone to the Gullah people of coastal South Carolina and Georgia. Opala has conducted groundbreaking historical, anthropological and linguistic research over the past 40 years and has applied that research to re-establishing connections between families in Sierra Leone and Gullah communities.

The Joyner Institute, named for late CCU Distinguished Professor of Southern History and Culture Charles Joyner, seeks to continue the work of the scholar and historian. The institute examines the historical scatterings of African populations to local regions and the subsequent evolution of blended cultures, specifically Gullah.

Opala was honored to be the first Joyner Institute scholar-in-residence, stating that continuing the scholar’s work is essential to the studies within the discipline.

“[Joyner’s] book, Down by the Riverside, is the greatest book on the Gullah people and their culture,” Opala said. “I’ve certainly used it in my research, so allowing that research to continue and influence the next generation of scholars in programs like this institute was worth all the time and engagement I could give.”

Looking toward the future of the Joyner Institute, Opala predicted success and accomplishment.

“The interactions I’ve had with faculty and students here has been both energetic and quite impressive,” Opala said. “The expertise the members of this University bring to the table showcases great potential for the Joyner Institute and the Gullah studies taking place within it.”