The Voice of the People

Gaining global awareness involves getting up close and personal with another culture – not only its landscape and high-profile tourist destinations, but also the everyday places where locals live, work, eat and shop. It means not only getting in a cab and going to the beach or the museum, but hiking down the road, taking part in holiday traditions or, in the case of musicians, sharing the rehearsal space in order to learn, emulate and join in. In January 2018, a group of Coastal Carolina University students experienced the Caribbean island culture when they traveled to Trinidad with Gillian Richards-Greaves, assistant professor of anthropology, and Jesse Willis, associate professor of music and director of percussion studies. The trip emphasized the fields of anthropology and music with credit-bearing courses Understanding Other Cultures (ANTH 102) and World Music (MUS 207).

“Gillian and I had a mutual interest in Caribbean music and Caribbean culture in general, and we thought Trinidad would be a good place to start,” said Willis. “We had both visited there before, and Gillian has relatives there. We’d both been studying the music and in particular the tradition of the steel pan. So, the trip was built through a combination of our interest, our expertise and our connections.”

An excursion to an open-air market gave students exposure to language, food and customs that was informed by prior reading but went far beyond the limitations of a textbook.

“The students were required to learn 50 new ‘Trinny,’ or Trinidadian, words or phrases,” said Richards-Greaves, “so when we went to the market in Arima, they had to speak to the vendors, learn about the unfamiliar fruits and vegetables, find out what they were called and what they tasted like. The people were speaking Creole, so the accents are very different than the students are used to hearing.”

Students also came across a Hindu wedding during their visit to Temple in the Sea, participated in a pre-Carnivale celebration on New Year’s Eve and visited the University of Trinidad and Tobago, where they had an opportunity to speak with students.

“Asking the students questions and getting to know them was definitely an enriching experience,” said Rachel Whyte, a senior double majoring in anthropology and geography and history.

The students also took part in workshops with both the National Steel Symphony Orchestra and the Supernovas Steel Orchestra, two of Trinidad and Tobago’s best-known musical ensembles. Both orchestras specialize in the use of steel pans, or percussion drums originally fashioned from industrial drums; these instruments are responsible for some of the most distinct sounds associated with the Caribbean islands.

“It was really fun playing with the National Steel Symphony Orchestra because the members were also having fun watching us and helping some of us play,” said Whyte. 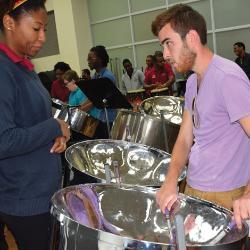 Emily Taylor, a public health major, added, “the members of the orchestra worked to make sure everyone was included in the drumming,” which helped students without musical experience enjoy learning how to find a rhythm of their own.

The relaxed atmosphere of steel pan rehearsals was unlike anything the students had encountered before.

“Multiple times, we had students ask, ‘When is rehearsal going to start?’” said Willis. “We would say, ‘Well, it’s happening; you’re watching it.’ Seeing that and then kind of going into a more full fledged ensemble rehearsal where they are just repping a specific part of the music over and over and over and over again with just a few seconds in between – for students to see that spectrum and experience the vibe of how they prepare was particularly interesting for the musicians in the group.”

Students experienced several aspects of Trinidadian music culture in addition to the steel pan, most notably Calypso, an  Afro-Caribbean folk tradition that blends music with poetry and historical storytelling.

“Calypso is the voice of the people,” said Willis.

Calypso is an oral tradition in which the singers, or “calypsonians,” memorize songs dating back to before the British Colonial era, and the true masters of the art can recall a vast library of songs about generations of political and public thought.

“The calypsonian is a master of the double entendre and speaking truth to power,” said Richards-Greaves. “Calypso is very political; it’s music that speaks up for the people.” 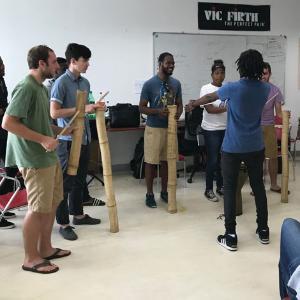 Gaining an insider’s perspective on a new culture often requires access to a native, and the group was fortunate to have that connection as well. Selwyn Williams, a retired police officer who is associated with the Supernovas Steel Orchestra and goes by the moniker “Fruit,” facilitated the group’s access to particular cultural opportunities.

“He was really helpful in giving us the insider’s track,” said Willis. “If we had done it on our own, it wouldn’t have been the same.”

Chanticleers in the Edwards College will continue their exploration of Caribbean voices and cultures next year as Cassandra Hill, assistant professor in the Department of Communication, Media and Culture, and Fred Wood, associate professor and chair of the Department of Politics, lead a trip to Mona, Jamaica, to study the area’s African, British and indigenous Jamaican culture. 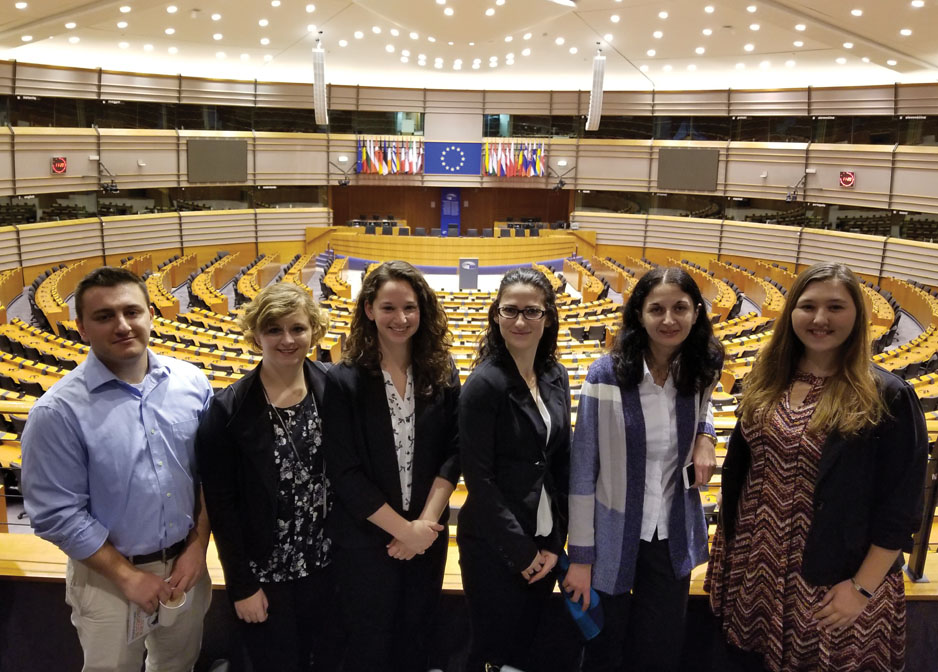 After months of prep work and a long international flight, political science major Shadda Corwin, a Wall Fellow and rising senior, landed in Brussels as the prime minister of Estonia.

Corwin, along with Mary Casey, Casey Mallon, Madison Nowlin and Connor Kilgore, spent the previous semester enrolled in POLI 430, in which they researched and drafted policy proposals on data exchanges in criminal investigations, as well as issues of personal privacy and cybersecurity.

In the field of political science, simulation is a kind of live-action roleplay in which students act as members of government, activist groups and outside interests. CCU’s Model European Union (EU)program is a five-day experience combining simulation with tours of EU institutions, a visit to Vesalius College in Brussels, and a trip to the city of Ghent. Both of the previous Model EU simulations were held in New York City.

Dekanozishvili, who developed and now coordinates CCU’s participation in SUNY’s program, said students involved in Model EU must navigate the same challenges facing policymakers in the real world – including difficult allies. While the Chants had well-researched positions and a clear goal to improve European cyber standards, not everyone was on board. Both Corwin and Dekanozishvili highlighted Poland as an especially tough partner to work with.

“Lately, you will see that Poland can be a real troublemaker in the EU, and this also played out in the Model EU simulation,” said Dekanozishvili.

The real Poland has adamantly opposed inclusive refugee policies both within its own borders and among other EU countries; its simulation counterpart followed suit, holding unrelated policy proposals hostage as leverage for its own anti-refugee push.

Because Corwin had attended the Model EU event in 2017, she was ready for Poland’s cantankerous disposition.

“I worked together [with Belgium] last year, so we were able to work together this year” on prioritizing cybersecurity and digital health, said Corwin. With help from Belgium and the Czech Republic, Estonia managed to get its suggestions through a vote.

The process mirrored the backroom deal-making and relationship-building that goes into real politics: students met off-site, taking part in what Corwin called “unmoderated caucuses” that involved players hashing out details away from the prying eyes of simulation runners and opposing delegates.

Corwin highlighted the line between students and the characters they played when she recalled the Poland delegation’s stubbornness in the face of Estonia’s proposals: “One of the other reasons we had a tough time with them was because they made some sexist remarks,” Corwin said. “However, the prime minister [Mateusz Morawiecki] had made sexist remarks the week earlier, so they were being very in-character.”

Four out of five members of CCU’s Estonian delegation were women. One, Nowlin, went on to win an award for most persistent negotiator, and every one of the delegation’s suggestions passed.

Perhaps next year, Poland will straighten up.