The 12-foot bronze Chanticleer mascot at the corner of Hwy. 544 and University Boulevard is looking fierce and formidable. Striking a fighter’s stance with a friendly fist bump, it extends a proud welcome to students and visitors entering campus. The statue was erected in September 2021, but few are aware of the years-long process – or the student and faculty experiential learning – involved in getting it there. In addition to blood, sweat, and tears, the creation of this Chanticleer required a new faculty member, an updated sculpting facility, a dedicated student staff, and three years of critical thinking and problem solving. The result is not only a prominent bronze figure that will last more than a century, but also new career opportunities for students and faculty as well as a campus foundry well equipped to create life-sized works of art for decades to come.

It’s cool to have a statue on campus that I personally worked on and is important to me that my family and others can go see,” said Ryan. “It’s cool that I got to make my mark through that."

Former CCU President David DeCenzo requested construction of the Chanticleer statue just six months after the unveiling of Chauncey, the first bronze sculpture on campus, which was constructed by Logan Woodle, sculptor and assistant professor in the Department of Visual Arts, with a team of students. At six feet tall, the mascot erected in 2015 at the center of the TD Sports Complex became an instantly popular meeting spot and go-to for photo ops. DeCenzo felt a larger, more imposing Chanticleer (a doppelganger for the more approachable Chauncey) would be a perfect correlation.

“[DeCenzo] wanted to augment campus aesthetics on a larger scale and demarcate the campus coming from [Hwy.] 544 with a very large, visual focal point,” said Woodle. 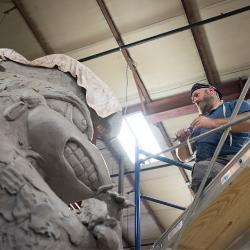 A project of this scale required full-time focus, so Easton Selby, then-chair of the Department of Visual Arts and current associate dean of the Edwards College, implemented a national search that identified Bryan Rapp, who became CCU’s first visual artist-in-residence in 2016. Over the next three years, Rapp worked with entire classes of students, which eventually narrowed to a core group of seven, on various stages and tasks of creating the sculpture. Student work included learning and implementing numerous skills in the laborious process, such as molding, casting, waxing, and welding, with some students devoting two full years to the effort.

“A team of serious students came on board and stuck with me for the rest of the way,” said Rapp. “When I look at the jobs I did in college in comparison to what these students were doing, it doesn’t even compare. They were managing their classes and then coming in after hours, between classes, and on weekends doing labor- 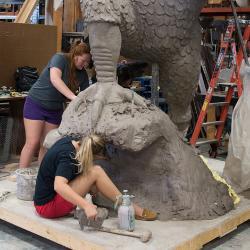 intensive, heavy lifting to get everything done that we were able to accomplish.”

Erin Ryan ‘18, who worked on the project for two years, said learning the sculpting process and building the Chanticleer was a central experience of her study at Coastal.

“Gaining knowledge about casting bronze was fun and important for me,” said Ryan, who added that both Woodle and Rapp were valued instructors and mentors. “I always wanted to be the one hitting the button, taking the temperatures, checking the mold, making sure everything was straight, running the pour line. It was important in instilling confidence in myself. You never know how sure you are until something is 2,000 degrees.”

TJ Roth ’20, on the Chanticleer team for three semesters, recalls the hours spent in the studio completing tedious, small jobs that would one day be part of something exponentially larger. 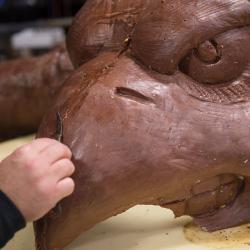 “We were doing sand molds every day and did some wax work, and other days we’d have to sit there on the ground, crisscrossed, and hand paint and pour each of the individual two-foot by two-foot panels. We’d hand paint each one to get it to the correct thickness. It was a really good learning experience.”

Ultimately, the team brought the project to as near fruition as possible before shipping it to Carolina Bronze Sculpture for completion. The Chanticleer, at that point, was more than 120 pieces of sculpted bronze, each weighing 70 to 100 pounds, ready to be assembled like a jigsaw puzzle. Students and faculty, including Rapp and Greg Buck, senior lecturer in the Department Theatre, had completed 90 percent of the work on the sculpture, but a professional foundry was required for the final steps.

Selby said student involvement in the Chanticleer was a key objective when the department decided to take on the project.

“The goal was to create the statue and involve student experiential learning in the process,” said Selby. “That’s the primary difference between our statue and those at other institutions. We’re one of the only institutions in the country who has done this successfully.”

The result, for these students – Roth, Ryan, Chris Kunk ‘19, Taylor Dinkins ‘20, Candice Regan ‘20, Joe Quinn ‘18, and Hanna Davis ‘18 – was a resume item that garnered attention from graduate schools and professional foundries. Five of the students centrally involved in the project moved to the next step in their careers based largely on their experiences with the Chanticleer statue.

Roth, who is currently the lead in casting and the patina artist at the American Bronze Foundry in Sanford, Fla., said the Chanticleer statue was “absolutely” the experience that landed her the position. “They were very curious about my experience and asked lots of questions in my interview to learn how we did what we did and how much it relates to their work,” said Roth. 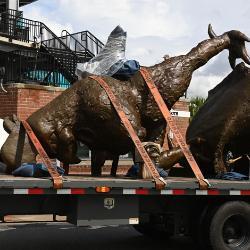 Ryan, who was accepted into a prestigious MFA program in metalworking at the University of Georgia, also credits the Chanticleer with her success. “It was super formative as far as what I went on to do,” said Ryan. “It was working on that statue that gave me all the tools necessary, and it was probably a big part of why I got in, because of the independent working and resourceful thinking and problem solving.” Ryan has since left the MFA program, largely due to difficulties with a teaching assistantship during the Covid pandemic, and works as a tattoo artist in Myrtle Beach.

The Chanticleer resume-building extends to Rapp as well. Currently director of the Wallace Master Sculptor Program at Brookgreen Gardens, Rapp said he obtained his position “undoubtedly because of what happened at Coastal.” In addition, Rapp recently hired Kunk, who had gone on from CCU to earn an MFA in sculpture at the New York Academy of Art, as an employee at Brookgreen Gardens. 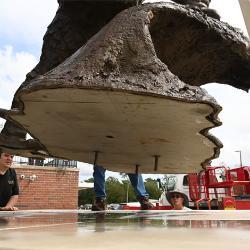 program to continue and thrive, attracting more future sculptors. “The footprint is there,” said Rapp. “Logan and I each experienced a learning curve with our projects, but now everything’s in place that an 8-foot statue is definitely doable. The knowledge is there, it’s battle-tested, they have the capability.”

Finally, the experienced students are happy to know they’ve left a piece of themselves on the CCU campus.

“It’s cool to have a statue on campus that I personally worked on and is important to me that my family and others can go see,” said Ryan. “It’s cool that I got to make my mark through that.”