On a clear fall evening in 2001, as the largest building on the CCU campus was dedicated, the Thomas W. and Robin W. Edwards College of Humanities and Fine Arts was born.

The event marked not only the fulfillment of a gift and a promise from the Edwards family, but also an investment in CCU faculty and students dedicated to making humanities and fine arts – the creation of art, music, writing, theatre, language, and prioritization of critical thought—a cornerstone of the University. The Edwards College, designed to gather all related departments under one roof, has over the course of two decades built an identity that synthesizes its creators, artists, and thinkers into a cohesive whole.

President Ron Ingle, Dean Lynne Franken, and leaders from the University and community gathered on Sept. 21, 2001, to celebrate the generosity of Robin and Tom Edwards, the latter of whom had passed away months before, and the timeless importance of humanities and fine arts. Festivities included a butterfly release, musical and theatrical performances, and an appearance by the Edwards grandchildren, one of whom would go on to graduate from the B.F.A. musical theatre program in 2020. Much like the Edwards family itself, the college was embarking on the creation of its own legacy that night.

The Edwards building boasts a 20-year history of confounding newcomers with its labyrinthine corridors and ostensibly secret corners that house essential administrative offices. Along with its unique layout and stunning interior courtyard, the new building brought with it state-of-the-art facilities such as the Edwards Theatre, Edwards Recital Hall, and Rebecca Randall Bryan Art Gallery. Proximity of complementary departments allowed for heightened interaction among faculty and students, and convenience of office space facilitated the unprecedented expansion of the college that was to occur in coming years.

In her address to the crowd convened that evening, Franken posed a classic rhetorical question: Do the arts and humanities matter? Her own answer offered a basis and a goal for the future of the college.

"To the attentive eye, these things form a rich tapestry of surpassing beauty."

“In this place, the wise old philosopher speaks. The youngest dancer pirouettes en pointe. From this place, a dozen bright-eyed students head out for a semester in Tokyo,” said Franken.  “To the attentive eye, these things form a rich tapestry of surpassing beauty; to the sympathetic ear, the motives of a grand symphony. And they do matter, now more than ever. As together we compose new symphonies for a new world in a new century, as together we make a future for our college, we will be asked to return the providential favor that has brought us so far. We will be asked fair recompense in whatever coin we possess, whether hitting the books, striking the set, polishing the term paper, writing yet another tuition check, or dancing on air.” 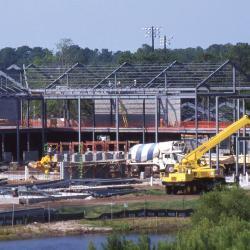 As the Edwards College grew into its physical space and emerging character, faculty worked to fulfill that challenge, achieving disciplinary excellence while crafting collaborative new dimensions within the college. Programs in philosophy, communication, and graphic design grew out of existing departments, while innovative learning environments such as the Athenaeum Press, the Digital Commons, and the Charles Joyner Institute for Gullah and African Diaspora Studies were created to give students new pathways for research and creativity.

From 74 faculty, eight majors, and 517 students in 2001, the Edwards College has blossomed to its current 201 faculty members, 19 majors, and 1,825 students. It has produced Broadway musicals, on-campus Gullah conferences, a literary journal, award- 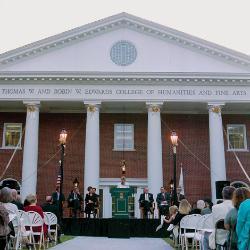 When the crowd gathered in 2001 raised a glass to toast the fledgling college, no one could have predicted the scope of the institution’s impact. In his invocation, the Rev. Bobby Wilkes offered thanks for its potential, including “all the marvelous things that happen when curiosity and imagination meet: All the gifts that will be developed, all the minds that will be awakened, all the lives that will be enriched, and the character that will be forged, enriching not only individuals but communities, our nation, and our world.”

Twenty years later, the Edwards’ trust, placed in a group of makers and learners, still shines with richness and potential.