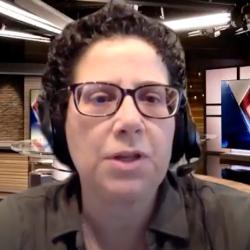 In the very best academic lessons, students arrive at the juncture where theory meets practice. In a recent CCU television journalism course, a collaborative project yielded just that – and even better, the learning extended beyond students to include community members, the instructor, and a national organization.

The project paired students in JOUR 310, Writing for Broadcast, with members of The National Grange, a 150-year-old community organization rooted in the agricultural industry, for a series of interviews. It was a perfect match: Sharon Tutrone, lecturer in the Department of Communication, Media, and Culture, was teaching students who needed authentic experiences in interviewing, and the National Grange state chapter leaders, many of whom oversee public events, needed experiences to sharpen their skills with the media. Eight students were paired with select Grange members for individual, virtual, recorded interviews to discuss the organization’s history and mission.

In TV news, the best thing you can bring into a journalism classroom is a real-world example for these students.

“This was the first time I’ve ever done a project like this in one of my classes,” said Tutrone (pictured above). “It could have been a huge success or a huge bust, but either way, I was prepared to try it. In TV news, the best thing you can bring into a journalism classroom is a real-world example for these students.” 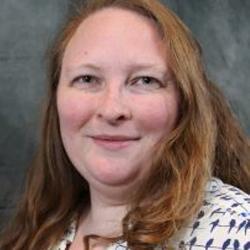 For Amanda Brozana-Rios (pictured on right), communications director for The National Grange who crafted the project with Tutrone, the initiative allowed members to hone their public-facing personas.

“Most of these folks are volunteers who have backgrounds as farmers, tractor sale dealers, or technicians, so they don’t typically have the communication training you would get if you were in another non-profit setting,” said Brozana-Rios. “Some of our state Granges are coming up on their 150th anniversaries, so chapter presidents will be asked for interviews. I wanted them to know how to provide background details, but also sound bites that would be useful for a TV context.”

Compelling factors created even more learning – and, possibly, risk – potential for all parties involved. The project began with Tutrone’s virtually visiting a group of National Grange leaders to discuss best practices in being an effective interviewee and conducting a mock interview with one member. Conversely, Brozana-Rios visited Tutrone’s virtual class as a corporate communications director, providing background on the organization. As part of the latter presentation, Brozana-Rios mentioned the organization’s tradition of using language including “master” to refer to the president of a chapter and “overseer” to refer to the vice president. The more modern terminology of “president” and “vice president” have been the Grange’s preferred language for more than two decades, yet the antiquated terms are still used within some chapters.

You can ask these tough questions as a journalist, but be professional about it.

“The Grange is a great organization,” said Tutrone. “They advocate for farmers, they advocate for agriculture, and one of their biggest initiatives right now is drafting legislation to get better broadband out to rural areas. So I encouraged my students to read up on the organization and the leaders they would be interviewing, but I also told them not to be afraid to ask tough questions. I told them, ‘You can ask these tough questions as a journalist, but be professional about it.’”

When the cameras started rolling on interviews between individual students and Grange leaders, without any contact or observation by Tutrone or Brozana-Rios, many of them did ask those tough questions. 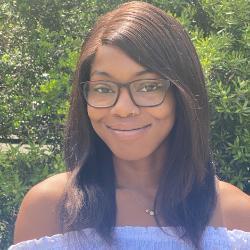 Jamesia “Mae” St. Louis (pictured on left), a communications major/women’s and gender studies minor with a concentration in journalism, interviewed Tom Gwin, president of the Washington state National Grange chapter. In addition to discussing the scholarship opportunities and advocacy the group offers, St. Louis asked about the use of traditional language and titles.

“He was very honest with me,” said St. Louis. “The Washington state chapter members’ views about the issue are 50/50, so half don’t even use the language any more, but half of them say it’s history and tradition, and they use it. He said [changing the language] is still a process with the older Granges.”

“He was comfortable answering my questions, and I was comfortable asking those questions because I didn’t go into it with an attitude of, ‘Oh it’s a 150-year-old organization, and he may not hear me; he may not care what I have to say anyway.’ I asked questions in a way that reaffirmed that I don’t have any negative attitudes toward him. So, I was able to get the natural answers and how they really feel about the language, how they feel about the organization, and how they feel about growth. He said they’re trying to move forward and be more modern.”

After viewing all eight completed interviews, both Tutrone and Brozana-Rios were impressed with the students’ performances.

“In addition to classroom preparation and a good attitude, they came in with the willingness to listen and learn,” said Brozana-Rios. “I think that sometimes, especially cable news network journalists go into a story with a certain narrative, and they just want to get the story they came in looking for. So I found it really telling that these students came in with a good sense of what journalism ethics and expectations are.”

News of the interview project reached the highest levels of the National Grange, and within weeks, President Betsy Huber requested that the issue of antiquated titles be added to the organization’s April 2021 annual convention agenda. The topic had been considered at the September 2020 convention, but no official action was taken.

“That language got put back on the schedule for April because of the discussions that happened in those interviews,” said Brozana-Rios. “We’ve moved from preferred terms to very strong statements, and the next step would be ‘Excise this language from your materials.’”

To Tutrone, the students deserve the credit for this significant development.

“I tell my students, ‘Journalism does two things: it generates conversation and it advocates change.’ That’s exactly what they did, and they did it successfully. These students should be celebrated.”

I tell my students, Journalism does two things: it generates conversation and it advocates change.