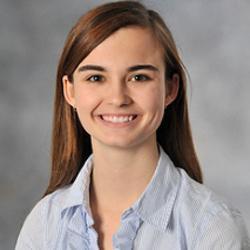 Many of us might remember the last thing we did before the COVID pandemic sent us home from school and work in March 2020 for a period that would extend nearly a year.

For Coastal Carolina University alum Elizabeth “E.P.” Vermont ‘20, her final memory is an interview to discuss her then-upcoming Critical Languages Scholarship, a highly competitive award that would take her to Azerbaijan to study the language in Summer 2020.

Then, of course, the whole world changed.

In the interim, however, Vermont has been able to not only pick up the pieces of her scholarship award, which was reconfigured as a remote opportunity, but to win the award again, for Summer 2021, when she’ll participate in a more intense, advanced version of the remote scholarship. Her story demonstrates a recurring theme of a pandemic era: those who muster resilience and innovation to meet challenges draw personal, academic, and professional benefits even in the most trying of times.

The CLS program, operated through the U.S. Department of State, is designed to expand the number of Americans mastering critical foreign languages. In 2020, Vermont was awarded one of 500 spots from among a national pool of about 5,000 undergraduate and graduate student applicants for scholarships in 15 critical languages. In its traditional form, the program brings students to the selected country for two months of immersion in its language and culture. The online version involved 7 weeks of 1-hour courses 5 days a week in Fall 2020.

“We had so many great experiences there, and it really opened my eyes to the importance and value of culture and language”

The remote experience was in some ways more impactful than the traditional, partially because the number of participants in Vermont’s Azerbaijani program was reduced from eight to just four. As the only newcomer to the language, Vermont enjoyed a one-on-one learning experience with her professor, who was teaching from Baku, the capital of Azerbaijan. In addition, the sponsoring university made useful attempts to offer a parallel experience.

“They had someone come in and join the Zoom one day and have us try to buy fruits and vegetables and other items,” said Vermont, a history major and German minor who graduated from CCU after just three years. “We would have gone to the market and do it ourselves if we were there, so instead they brought the market to us. They did their best to try to immerse us, even thousands of miles away.”

While she took a “gap” year in 2020-21, Vermont has been anything but idle. In addition to completing the scholarship in the fall, she gained acceptance to Georgetown University’s master’s program in conflict resolution, partially thanks to her 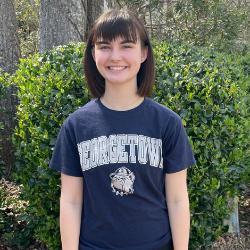 CLS experience, and plans to enroll in Fall 2021.

“Eventually, I’d like to work for the U.S. Department of State, focusing on transitional justice and atrocity prevention,” Vermont said.

Vermont’s interest in languages was born when she attended a Maymester study abroad trip to Berlin in 2018 with Amanda Brian, associate professor in the Department of History and associate dean of the Edwards College, and Gary Schmidt, professor and chair of the Department of Languages and Intercultural Studies and CCU CLS advisor.

“We had so many great experiences there, and it really opened my eyes to the importance and value of culture and language,” said Vermont, who declared her German minor following the trip. 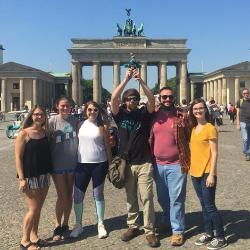 Schmidt recalls being impressed with Vermont’s capacity for language acquisition, as the trip was her first experience taking German and was an accelerated course.

The idea of the CLS was prompted by Chris Gunn, associate professor in the Department of History, who also taught an undergraduate research course that introduced Vermont to details of the Bosnian civil war.

“The study of human rights violations and genocide in that course, the lack of true reconciliation in the country today – that’s what initially drew me to that region of the world,” said Vermont. “When Dr. Gunn brought up the scholarship, it seemed perfect because my interest was in Eastern Europe, and I know that after graduate school, I’ll likely end up in the Middle East. Azerbaijan is really closely related to Turkish, so then I’ll have that language that I need.”

Vermont is the second CCU student to be accepted to the CLS program. Hannah Hamelman (’18) traveled to Tajikistan in Summer 2018 with the scholarship and afterward taught English in that same country. At the request of Brian and Schmidt, Hamelman presented a workshop on the CLS application and experience for a group of interested students in

December 2019. For the 2020 program, ten CCU students applied for the scholarship, and one other student gained a spot as an alternative scholar.

Perhaps on the other side of the COVID pandemic, international travel opportunities will fully resume and future CCU students, taking a page from Vermont’s playbook, will apply for and be accepted into the program. Where will Vermont be by then? Maybe Istanbul, Turkey; Geneva, Switzerland; New York, or some other location where key global diplomatic negotiations take place. Regardless of her location, though, she’ll be making her mark on the world.