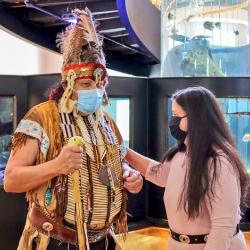 “I have a place to be now. That’s how I feel about the tribe. It’s a place that people who have not been accepted in the full society of this country can be accepted.”

Chief Harold “Buster” Hatcher’s sentiment describes his feelings upon discovering the Waccamaw tribe in the 1980s, yet it also expresses the fundamental purpose of the group and its snowballing movement to become federally recognized. Through an exhibit at the Horry County Museum in Conway, a group of Coastal Carolina University students and faculty members have thrown the weight of knowledge, research, physical aesthetics, and public awareness behind the effort. 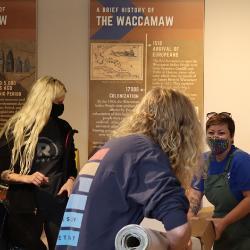 Department of Anthropology and Geography. The project is particularly fitting since Coastal Carolina University sits on land that was traditional territory of the Waccamaw Indian People, and its leaders and members were centrally involved in the exhibit’s creation.

“It’s their story, and we wanted to tell it in their words,” said Clary.

Throughout the semester, students engaged in research including archival study, group and personal interviews, and participation in traditional ceremonies. Multimedia exhibit elements include belongings such as a ceremonial pipe, traditional regalia, and tools as well as recorded interviews and life-sized canvas panels of tribal leaders. Throughout, the exhibit highlights the human dimension of the Waccamaw tribe within a societal context. 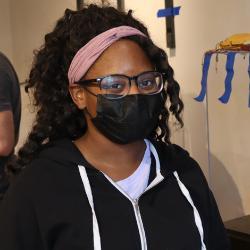 Ozzy Whitley, a junior anthropology major who had studied the Waccamaw in previous classes, said this experience went far beyond academic understanding.

Eliza Hibionada, a local, non-degree-seeking student working in the Cultural Heritage Certificate program, was surprised to learn of this group within her native area. 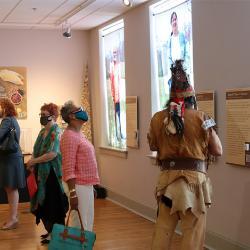 “I grew up here in Myrtle Beach, and sadly, we didn’t learn a lot about the Waccamaw tribe at all in school, so it was quite an honor to be exposed and be involved, especially in their fire ceremony,” said Hibionada.

The students were cleansed with smoke before entering the fire circle and learned ceremonial elements including prayers, contributions to the fire in the form of herbs and ashes, and the process for continuity from year to year.

Quotations from Waccamaw Indian People that visually pepper the exhibit express the tension between alienation and belonging that defined many of their experiences before joining the group.

“Knowing that you’re Indian, knowing that you have been told this all your life, but not having any information…finding the tribe was like finding a home,” said Cheryl Cail, vice chief of the Waccamaw tribe, in a recorded interview.

That sentiment was the root of Hatcher’s campaign – which has been ongoing for three decades -- to bring together and raise public awareness of the Waccamaw people. The group achieved state recognition in 2005, which allowed them to establish tribal grounds in Aynor, S.C., that houses annual events and the Waccamaw Tribal Office. 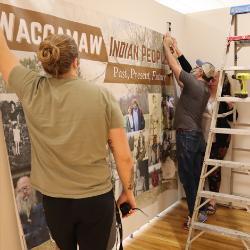 Inclusion and equality are also driving motivations in the ongoing effort to achieve federal recognition. This acknowledgement would allow the Waccamaw Indian People numerous benefits including the ability to engage in government-to-government relationships with the U.S.; gain funding as a sovereign entity; and take possession of their ancestors’ remains and other culturally significant objects. In March 2021, U.S. Rep. Tom Rice introduced a bill that would extend federal recognition to the Waccamaw, and public support for the endeavor is a critical factor for its approval.

“It’s so rewarding for students not just to see their research turn into this amazing, tangible thing,” said Dillian, “but also to know that they’re really making a difference for Native American people. They’re raising awareness, and they’re educating the local community, so it’s going much further beyond just an exhibit. The implications are pretty broad reaching.”

"It’s going much further beyond just an exhibit. The implications are pretty broad reaching.”  –Carolyn Dillian, professor, Department of Anthropology and Geography

For Hatcher and the Waccamaw tribe, the exhibit represents a major step forward in their efforts, made clear to the Chief as he watched community leaders, residents, and the media react and respond at the recent opening.

“I had 2 or 3 interviews that day with newscasters,” said Hatcher. “I’ve been on tv before, and I’ve spoken with governors and political leaders. I’ve spent a lot of time talking about me and my people, trying to make them understand that we are real. With the exhibit, things just feel different; it seems like I’m speaking now as opposed to begging. So perhaps this will be a turning point, at least in this [geographical] area, to where they will understand that we Indian people are real here. We live here. We’re not a past tense.”

If the momentum continues, the Waccamaw Indian exhibit may certainly achieve more than just local education about an important group.

“To me, it’s a lot more than just an exhibit,” said Hatcher. “It’s an opening. It’s an awakening. It’s a new beginning.”

The online component of the exhibit can be found at waccamawpastpresentfuture.com.