Chasing & Tracing the Scourge of the Seas 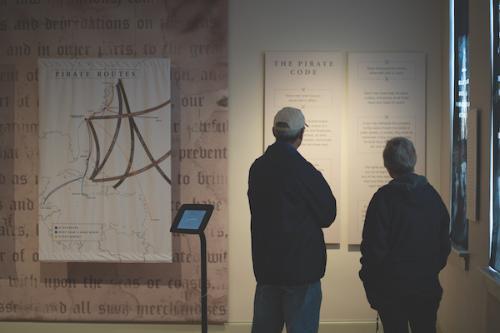 The sly, swashbuckling, peg-legged plunderer: Many associate this depiction with the Caribbean pirate, but the Athenaeum Press and the Horry County Museum sought to push against these stereotypes to depict historically accurate accounts of piracy. Turns out, they didn’t have to search too far for the truth — piracy is, after all, native to the Carolinas.

Cue Rough Seas and Legacies: Stories of Carolina Piracy, an interactive museum exhibit that documents the rise and fall of piracy along the Carolina coast during the late 17th and early 18th centuries. The project, a collaboration between CCU’s Athenaeum Press and the Horry County Museum, spanned nine months and picked up state and regional awards, demonstrating the allure of the buccaneer as well as the power of creative teamwork among innovative students and industry professionals.

Alli Crandell and Scott Mann, director and production manager of the Athenaeum Press, respectively, recruited 16 students from a variety of majors to research, plan, design, and create a story comprised of less kitsch and more substance than the typical pirate tale. The project constituted the 2018-19 two-semester experiential learning course offered through the Athenaeum Press, CCU’s student-driven publishing lab. Walter Hill, director of the Horry County Museum, coordinated the production and installation of the exhibit. 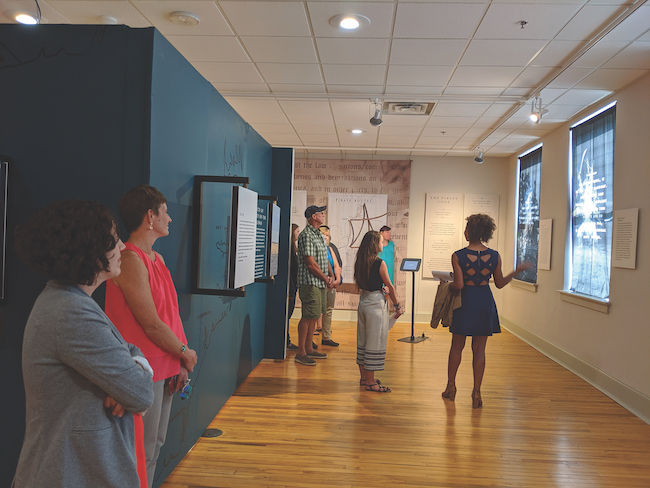 It all started with determining the nature and scope of the narrative itself. Gathering primary sources dating back to the 17th and 18th centuries proved to be a challenge, requiring multiple field trips across the Carolinas and a sizeable amount of critical thinking.

“This area wasn’t really well-documented, even into the contemporary moment,” said Crandell, “so our students struggled with the kind of story they wanted to tell. Probably one of the most informative [field trips] was the North Carolina Maritime Museum in Beaufort. It’s the home of Blackbeard, and they have the wreckage of his ship—the Queen Anne’s Revenge. The students learned so much about the authentic events and people involved in the era.”

The group solidified the scope and storyline of the project by the end of the fall semester and began construction at the museum in January 2019.

Leah Alford, lead photographer and digital culture and design major, detailed the collaborative challenges of design and focus. “We all were on different mindsets as to what we were individually trying to get out of the space,” said Alford. “The challenge was finding that middle ground as to how everything should look: what the foot path should be, what color we should use, and so forth. We took every single measurement we could possibly think of in testing out ideas.”

That’s where Hill stepped in. From the walls to the windows, Crandell credits him and the museum faculty for their valuable input.

We wanted this exhibit to feel more natural, have more light, so the faculty pushed the students to utilize the window panels rather than cover them up,” said Crandell. “The students went through probably 10 different fabric options, thinking long and hard about how to utilize those windows, which you don’t typically have in a museum or gallery.”

The finished exhibit encompasses the entire room. Posters mapping pirate routes and detailing pirate codes line the walls, and model warships complete with rows of cannonball artillery rest in glass box displays. The windows are covered in translucent black fabric with iconic pirate images and quotations superimposed on them, resulting in an immersive, powerful impression of authoritative mystery.

After successfully representing Horry County at the SCFM Annual Conference in March 2019, Crandell and company submitted the exhibit to the regional Southeastern Museums Conference (SEMC), held in October 2019 in Charleston. Ultimately, the Rough Seas team would achieve the partnership’s first regional awards: a 2019 Student Work in Museums (SWIM) Award and silver in the Under $10,000 overall budget category. 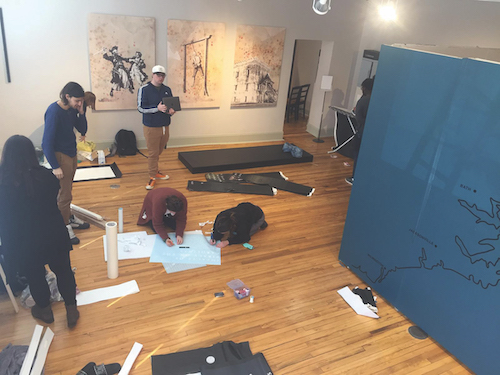 For Abby Inman and James Pulley, both junior graphic design majors responsible for the supplemental maps and posters, the SEMC conference was eye-opening for the future opportunities presented to them.

There were people from all over the United States,” said Inman. “It’s opened my eyes to see that I could work in a museum. There’s graphic design work everywhere.”

Alford recounted a conversation held with a keynote speaker, who asked why the Rough Seas team didn’t opt for a digital exhibition. 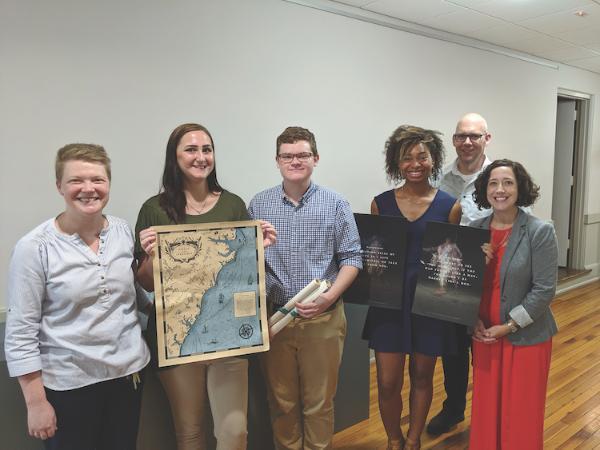 “It was surprising and refreshing to realize that we actually created something physical and tangible when everyone else in our category had online museum exhibits,” said Alford.

Crandell echoed Alford’s stance, with special emphasis on the relationship between the press and the museum.

“We really found a great partnership. The folks at the museum—Walter, Hilary [Winburn], and Marian [Calder]—have just been really fabulous in letting our students run wild and imagine,” said Crandell. “We don’t just have to do books or digital publications; we can do these experiential learning initiatives, too.”

These CCU students, like the pirates, leave a lasting legacy: Rough Seas and Legacies will become a traveling exhibit in 2020-21, ensuring that its life extends beyond the academic careers of these award-winning students.

It’s different to see something and touch something; it evokes different emotions every time you experience it. People often go straight for the digital aspects, and that’s OK, but in this sense our exhibit brought a new recognition to what pirates really were. You don’t always get that experience online.” 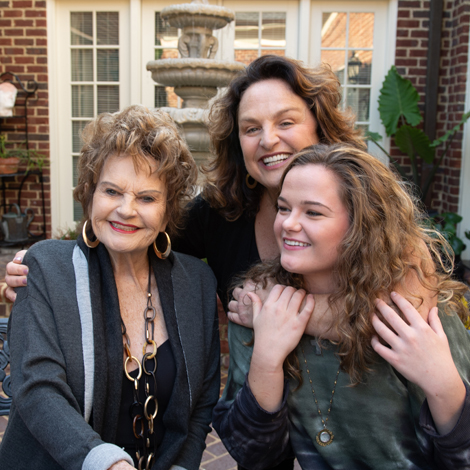 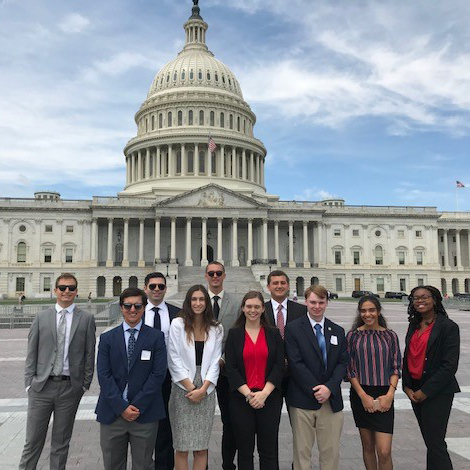