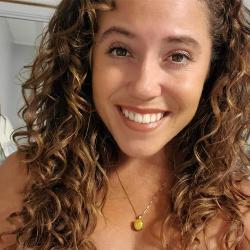 Natalie Francis Harris ’16, a.k.a. Natty Love, may be in the early stages of a worldwide musical career. Her recently released and first original single, “All I Wanna Do,” blends a reggae rhythm with a Caribbean beat and rich, smooth vocals that place the listener directly on an island beach at sunset. With her talent, her looks, and her title as Miss Coastal Carolina 2015, one might think of Francis Harris, a sixth-generation native of St. Thomas U.S.V.I., as a born performer. However, she attributes her confidence and her training to the inclusive, encouraging environment she found as an undergraduate in the Edwards College.

As a first-generation college student and a transfer from Horry-Georgetown Technical College, Francis-Harris was unsure of her place in academic fields, considering majors of education and business before settling on communication. It was even later in her journey when she began her minor in vocal performance.

“I thought I would have to convince my parents to let me minor in music,” said Francis Harris. “It’s a shame that it took me so long to ask, because they were happy when I finally did. They were just waiting for me to ask the question.”

Francis Harris studied under Patti Edwards, associate professor in the Department of Music, who has since retired.

“Natalie wanted to sing, and nobody was encouraging her, and I just thought she was a wonderful kid, and I encouraged her to sing and to take lessons and do everything she could at Coastal,” said Edwards.

Edwards told Francis-Harris that performing at Wheelwright Auditorium was an important part of the learning process; the only problem was that the only event remaining in that semester was the Miss 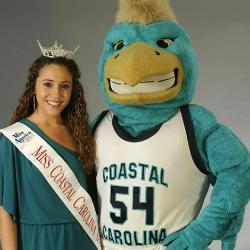 “She was like, ‘Just do it,’ and I refused for so long,” said Harris. “I had never been in a pageant in my life. I spent most of my life barefoot, running around, beaching it up. I never really wore makeup, I never did my hair, I never did the things you see on TV when you think pageantry.”

Edwards, who remains in close touch with Francis Harris, recalls the resistance.

With singing as her talent, Francis Harris won the pageant.

Another important marker of Francis-Harris’ CCU experience was involvement with other Caribbean and international students as well as activities surrounding her Caribbean heritage. She performed “Holja,” a Caribbean pop song, in the 2016 African American Music through the Years program and worked on a project with Jack Roper, retired teaching associate in the Department of History, to bring a Gullah Geechee speaker to campus.

When Francis Harris returned to St. Thomas after graduation, her life’s pattern of serendipity continued. Her first night home, she was enjoying music from a live band when her cousin asked the singer if Francis Harris could join them onstage for a song or two; they agreed. Immediately after, they asked her to join the band, so she became part of Lourdes & the Switch, traveling between St. Thomas and St. John singing backup vocals and solos, for more than a year.

That is, until the hurricanes hit. Irma and Maria devastated St. Thomas as well as other islands in the vicinity, including Puerto Rico, in September 2017, leaving Francis Harris and her entire community without jobs, access off the island, or even electricity for eight months. During the aftermath, Francis Harris went to the beach one day and wrote “All I Wanna Do,” in a rare moment when she was able to emotionally escape her surroundings and relax in the natural beauty of the island. The song would remain simply lines, literally scraped into a section of a cardboard box, for more than two years.

Francis Harris’ next singing gig brought her back to her geographical roots as well as her musical roots developed at CCU. From February 2018 through March 2020, she sang lead vocals for Full Circle, a full Caribbean band performing calypso, soca, and reggae, as well as jazz, which was her academic emphasis.

“We played six nights a week for two years,” said Harris, singing covers only until, at one performance, a group of singers she invited onstage delivered original music.

“My base man and manager, Cinque Donovan, was like, ‘Girl, you can’t let them show you up. I know you have an original in there.’” 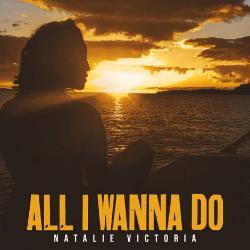 Harris replied with “All I Wanna Do,” which instantly became an audience favorite and a performance staple.

While Covid interrupted the singer’s process of producing her single and music video, Francis Harris practiced her learned traits of patience and preparation in the interim. Part of the task was generating the “confidence and the bank account to get it started,” Francis Harris said, and another was identifying people, resources, and timing to create and release the song and the video effectively. Both her parents and numerous friends were involved in the effort, and the video was released at a Full Moon Party in St. Thomas on April 16, 2022: the debut of Natty Love.

Francis Harris feels CCU was an integral step in her life’s journey. In fact, when she encounters guests from South Carolina at her day job as a tour agency manager at a Marriott hotel, she sings the praises of CCU.

“I have sent three different people to Coastal on my own,” said Francis Harris. “Right in front of me, they’re like, ‘Mom! I want to go to Coastal!’” Their parents come back the next year wearing CCU hats.”

“It’s the best place I could have chosen to go.”