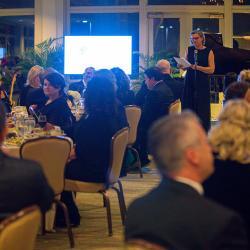 The tables were set, the guests were bejeweled, the auction items were arranged, and the jazz ensemble was playing on a mild winter evening, complete with a gorgeous, moonlit ocean view, at the venerable Dunes Golf and Beach Club in Myrtle Beach. Many of the guests are frequent cultural arts patrons, and many attend numerous annual fundraiser benefits, but none had experienced an event that so perfectly demonstrated and celebrated the value of an education in the humanities and fine arts. This entertaining evening, full of elegance, excitement, and laughter, beautifully captured the spirit of Robin W. Edwards.

The CCU Edwards College 20th Anniversary Gala, held on Feb. 11, 2022, was a signature event designed to unite supporters of the college with the students who benefit from their generosity, together with friends and family of Thomas W. and Robin W. Edwards on the 20th anniversary of their groundbreaking gift that established both the Edwards building and the Edwards College of Humanities and Fine Arts. Robin Edwards and David Russell, along with their four children Temperance, Miranda, Foster, and Grainger ’20, were all in attendance to honor and celebrate their family legacy. 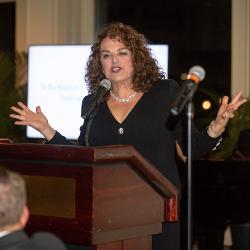 dancing scenes from Crazy for You; and songs from the productions Elegies, Tick Tick Boom, The Bridges of Madison County, and Kinky Boots. Edwards College faculty were also represented with Professor of English Dan Albergotti reading an original poem and Professor of music Philip Powell performing on the Edwards College’s recently acquired Spirio-R Steinway piano.

Bornholdt’s remarks highlighted the growth of the College – in size, reach, breadth, and scope – over the past two decades. She noted the expanded facilities, signature programs, and exclusive opportunities afforded to students as a direct result of the Edwards’ gift and donors’ continued generosity.

“Edwards College students are doctors, lawyers, authors, Emmy nominees and Emmy winners (I know of at least 4), teachers, professors, actors – on Broadway and on screen – football players, business owners, designers, painters, poets, newscasters, ministers, secret service agents, active military and veterans, police officers, civil servants, musicians and recording artists, and so much more,” Bornholdt said. “This is because of the Edwards family, and it’s because of you.”

In a video presented at the gala, a series of students who have been awarded Edwards College Board of Visitors scholarships discussed how that financial support impacted their lives.

“It’s helped alleviate concern about money for school, so I can focus on my studies: on creating and polishing my craft, writing both outside the classroom and inside. It really brings peace of mind,” said Melanie Schlesser ‘23, English major.

“Sometimes you don’t really believe in yourself,” said Ayers. “So to receive this sort validation, this support – it’s like, ‘Hey. These people, they think you can do it. They’ve got your back.’”

The gala raised $114,000, enough to fund 100 student scholarships. Never before was the connection between financial donations and creative output made so explicit or so rewarding as on this evening.

Members of the Edwards-Russell family gathered on the dance floor for the post-party, joined by student performers and assorted party guests. As they danced to the tunes of D.J. French Noodles (a.k.a. Eric Hall, chair and professor in the Department of Music), everyone knew this was a celebration of which Robin Edwards would heartily approve.