A recent delivery to the Department of Music looked like a typical cardboard box. However, its contents represented a new frontier for CCU musical repertoire.

Student musicians surrounded the box, exchanging wide-eyed looks and whispers of excitement, at a recent gathering that brought faculty, students and administrators together in the Edwards conference room to recognize the historic moment.

“Can you believe it?” 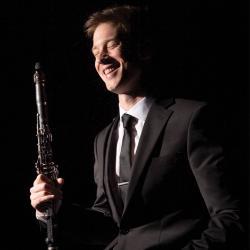 When Assistant Professor of Woodwinds Eric Schultz, with a ceremonial flourish, instructed the students with to open the box, they reached inside like it was Christmas morning. Giddy gasps echoed through the room.

The students were holding sheets of music: the work of Grammy-nominated flutist and composer Valerie Coleman. It’s the first musical library of a living composer that CCU has ever acquired, as well as the largest existing collection of her work.

Coleman is founder of the New York-based wind quintet Imani Winds, which is dedicated to introducing more diverse composers to the wind quintet repertoire. She was listed as “one of the Top 35 Women Composers” in the Washington Post in 2017; became the 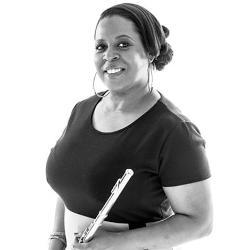 first living African-American woman composer commissioned by the Philadelphia Orchestra, for her piece “Umoja, Anthem for Unity,” in 2019; and was named 2020 Classical Woman of the Year by Performance Today.

Schultz and his students had been playing Coleman’s work over the past year, and the progressive experience is a case study in diversity, equity, and inclusion in the field of music. The library acquisition is a tangible outcome of a conversation that began in 2020, when Schultz and his students started thinking about the limitations of traditional musical repertoire – namely, the fact that most music students never learn or perform music by women, people of color, or living composers. 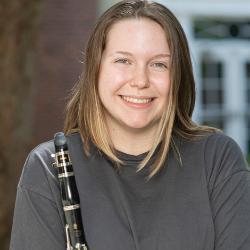 Schultz explained that Western music education focuses almost exclusively on the canon: work by European composers from the period 1600-1990.

Cornell, a junior music major who plays clarinet, also thinks diversity – whether in regard to gender, race, or time period – is a reasonable request.

“Often times when we’re given music to play, it’s from the same demographic of old dead white men,” said Cornell, “so we wanted to do something more contemporary. Why can’t we find or play music by women or people of color or people who are alive to hear us play their music?”

“The student woodwind ensemble that I direct played Coleman’s Umoja, and we just fell in love with it,” Schultz said. “We played it in the courtyard, we played it in a recital – the students couldn’t get enough of it.” They also learned and played Coleman’s “Portraits of Langston” in multiple arenas, as well as music by contemporary composer Amanda Harberg.

Schultz started thinking bigger about issues of diversity and accessibility in his field, especially in conjunction with his role as faculty fellow with the Edwards College Center for Inclusive Excellence (CIE).

“One challenge we have as professors is that so much of our music, music commonly studied, is now in the public domain. You can just go to an online music library and print it for free. You can’t do that with music by living composers. If students want to work on a piece, they have to buy. The cost, maybe $40, becomes a significant investment when students could study something for free.”

“In my grant proposal, I basically explained, ‘My students love Valerie Coleman so much. We found this gold mine of amazing music by her that she’s written over all these decades. Can we just buy it all and just have it here? And then this whole access issue becomes a non-issue?’” said Schultz. “And they said ‘Yes, that’s why the AIDC is here.’”

Students at the music library unveiling event were fully aware of the work’s significance. 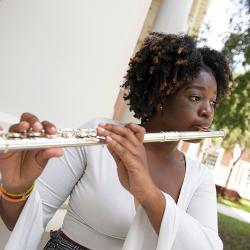 “Valerie Coleman is someone I’ve looked up to since I was in sixth grade,” said Gaston, “and it’s comforting to have someone who’s alive and who looks like me who does what I do. She looks like me, sounds like me, so having someone like her to be here is insane.”

Rachel Huggins, percussionist, also appreciated the significance of the moment.

“It’s so exciting because I’ve had the same experiences as Hailey and Diamond and any other female musician, especially in a field like percussion, where there’s so few of us, and what’s so amazing about Valerie Coleman and having her music is not only is she a living female composer of color, but she’s 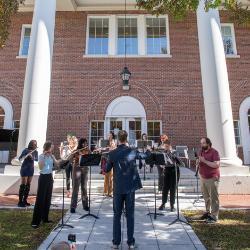 incredibly talented,” said Huggins. “We’re not just buying her music so we can check off a diversity box, but because it’s incredible music and we’re really lucky to have it, and we’re just so excited.”

In addition to the Valerie Coleman library, Schultz has also created a Valerie Coleman residency, which will bring the artist to campus in Fall 2022 for instruction, interaction with students, and a performance. The residency was funded by the Edwards College CIE and the Department of Music.

“This initiative is meeting the cultural unrest moment that we’re going through in all segments of society,” said Schultz. “Part of the challenge coming out of the wake of 2020 is, can we translate our beliefs into action? We had all these institutional manifestos coming out of 2020; now what can we do? And that’s why I’m so grateful to be part of the CIE and the Edwards College -- this is a place where I have funding. I have real support.

Schultz hopes CCU’s initiative of diversity and inclusion will become an example for other institutions.

“I hope I can co-publish an article with these students and just put this model out there. Other institutions can do this. Whether it’s an institution that has a couple thousand dollars to throw at it or one that has zero dollars, there’s a way to solve these problems for any institution, and I hope that this can be replicated elsewhere.”

Schultz’ final go-ahead at the Valerie Coleman library opening that day in the conference room continues to reverberate.