It’s possible to make a living as an artist.

In the darkest of moments, better days are ahead.

These cliches sound like greeting card messages, but Charles Clary is living proof that they possess a kernel of truth. 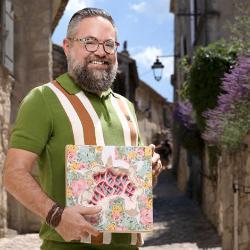 Clary, associate professor in the Department of Visual Arts at Coastal Carolina University and winner of the 2022 HTC Distinguished Teacher-Scholar Award, is breaking out of a productive, successful artistic period rooted in personal grief and mourning and into an equally prolific period of hope and possibility.

Clary’s current exhibit, “Memento Viveraddidle,” is on display at CCU’s Rebecca Randall Bryan Gallery (Sept. 5-Oct. 7), and he will deliver a corresponding lecture as the 2022 HTC Distinguished Teacher-Scholar, titled “Memento Mori: The Fragility of Life,” on Tuesday, Sept. 20 at 7 p.m. in Edwards Recital Hall. Titles of both the exhibit and the lecture are Latin; Memento Viveraddidle translates to “remember to live,” and Memento Mori, “remember you must die.”

Clary’s mesmerizing works of hand-cut paper have elicited national attention and acclaim for years, and his work ethic is evident in the sheer volume of his creative activity: he has participated in 189 exhibitions in his career, including 22 museum exhibitions, 32 solo exhibitions, and 144 group and juried exhibitions. Clary joined the CCU faculty in 2015 and teaches a full range of courses, in addition to being active in CHROMA, CCU’s student art club, on top of his professional productivity.

For all its beauty and sense of intrigue, Clary’s recent period of work drew from a dark time in his life. His “Memento Mori” collection, as well as the upcoming lecture, were inspired by the death of his parents.

“I was dealing with the tragic loss of both my parents in 2013 to smoking-related cancers, and the work reveals how that really affected my life, how it changed how I looked at my work, how I started thinking about the medical community, and how I started thinking about my own mortality,” said Clary. “At the same time, their deaths caused a resurfacing of emotions from the very difficult childhood I grew up in,” which included poverty and his parents’ alcoholism and neglect.

“Charles’ work isn’t about documenting tragic events,” said Woodle. “It’s about mechanisms for moving through those events. And that’s why people respond to his work so strongly. It’s not glaring into the eye of the problem; it’s not dealing with catastrophe as the crisis. Instead, it feels like you’re moving through and moving past something. So there’s a sense of play and optimism even in work that’s grounded in some fairly dark undertones.”

Clary’s professional success accelerated in the past year as a string of events brought him prestige and reward. At the end of a spring semester on sabbatical, his alma mater Savannah College of Art and Design (SCAD) invited him to participate in an alumni ambassador residency program in Lacoste, France. Clary spent 10 weeks working and traveling in the area throughout summer 2022; at the completion of the residency, he presented his work at the renowned Death & Culture Network (DaCNeT) conference in York, England, where both he and his wife, Katie Clary, assistant professor in the Department of History, presented papers in their respective disciplines. Also within the past year, Google and Amazon have each requested Clary’s work to be displayed in their corporate offices.

The majority of work in Clary’s current exhibition, “Memento Viveraddidle,” was created during his summer residency, which reflects a different worldview.

“For the longest time, my work was about Memento Mori, this collection of traumas. But this exhibit is mostly newer work that’s much more colorful, more hopeful,” Clary said. “I called the exhibit Memento Viveraddidle because it talks about coming to terms with the past. To remember to live because one day you will die. It’s almost a reclaiming of my life, to some extent, and learning not to live in that grief constantly.”

Clary was stunned when he learned he was awarded the 2022 HTC Teacher-Scholar title, as well as the professional reward he’s gained throughout the past year.

“I’m just dumbfounded,” said Clary. “I’ve worked really hard for 12 years to achieve the things I’d hoped I would achieve. Everything is coming to fruition, and it seems surreal. In the long run, it’s beneficial for my students to see these things, because it does show what can happen with hard work and dedication.”

The commercial demand for Clary’s work is also gratifying, though for a different reason.

“I’m super thankful and very humbled that my work is touching people the way it is. There’s a connectivity to the work that really shines through, I think, that we all have this shred trauma, whether we know it or not; we all go through similar experiences, to some degree.”

For more information on Clary’s exhibit or lecture, contact Jim Arendt, director of the Randall Gallery, at 843-349-6409 or jarendt@coastal.edu.