Effecting global change might sound like a tall order for a 27-year-old alum, but Jonathan Klein ’17 and a team of associates spent much of summer 2022 doing just that.

Klein, an intelligence and security studies major who served as a U.S. Army officer from March 2018- February 2022, joined forces with three friends to carry out Project Independence Day: Ukraine, which began in early July and was successfully completed in late August. The initiative involved raising $100,000 to procure and deliver four ambulances and communications equipment to forces on the ground in Kriviy Rih, Ukraine. The team is an assemblage of innovative, dynamic thinkers with a common thread of military service and a common goal of providing global humanitarian aid. Founders Alex Clark and Andrei Mochynsky are both Stanford MBA students; Clark is a West Point graduate, and Mochynsky is a Ukrainian national.

Mochynsky’s uncle, a political figure in Kriviy Rih, reached out to his nephew in early summer. Kriviy Rih is a front-line city with a population of 650,000 and thousands of displaced and wounded people arriving daily from other regions in Ukraine.

“He said, ‘This is our problem. We need help. Can you help us?’ The issue he brought to Alex and Andrei’s attention is that the medical system is buckling,” Klein said.

Clark and Mochynsky developed the idea of procuring and personally delivering ambulances and supplies to the city. Clark contacted his former West Point roommate for help: Brian Bui, who is an MBA student at Harvard Business School. Bui called Klein, a childhood friend who had military experience plus a history of working with nonprofit organizations.

“Brian called me and said, ‘Do you want to go to a war zone and help people?’” said Klein, who is also pursuing a master’s degree at Johns Hopkins University. “And I said, ‘Yes. I’ll help with fundraising, and I definitely want to be there on the ground in Ukraine.’”

Work began in July, as the team created a website and a fundraising campaign with a goal of $100,000 by August 1. With significant support from the Ukrainian Freedom Fund (UFF) and British Ukrainian Aid (BUA) as well as corporations and high net worth individuals, Project Independence Day met its fundraising goal and began procuring supplies and preparing for the journey.

The team, which also included Sam Ashley, an MBA student at Michigan, and Sean O’Donnell, a Canadian entrepreneur, left for Ukraine via Hungary Aug. 18. Though several team members had a military background, they’d never been in an active war zone before.

“There was definitely fear of what to expect on the other side of the Hungarian border,” said Klein.

The two-day drive to Kriviy Rih included frequent checkpoints and a curfew that prevented driving at night. The first day of driving within Ukraine, the crew was treated to natural beauty, welcoming people and excellent food. The second 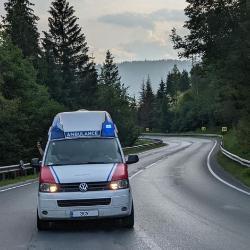 day, however, as they approached the active area, the scenery and mood changed.

“When you get to the city of Kriviy Reh, you hear sirens and bombings – you start to experience more and more the chaos of war,” said Klein.

During the five days the team spent in the city, Russians forces dropped a cluster bomb in an area 10 minutes away from the team and phosphorous about 15 miles away. 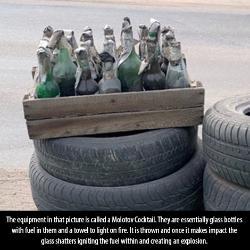 “Russians are committing war crimes,” said Klein. “When I was here in the U.S., I believed the news did a good job of covering what’s going on, but once I got on the ground, I experienced a whole new understanding. The level of violence is very hard to comprehend. It was interesting to gain a real taste of what these people experience daily.”

The group met with political officials; officially handed off the ambulances, equipment, and supplies; and provided aid on the ground where they could. Team members had to be careful with their movement and their communications because of active Russian attempts to identify and detain Americans.

“On that side of the world, this might be only the first or second time these people have met Americans, so we were functioning as ambassadors,” said Klein. “We were very, very careful with what we said and how we conducted ourselves. The people were grateful and incredibly kind.”

“This story accentuates the overall approach that our program takes to education,” Fitsanakis said. “We train students for public service, which is more than just working for an agency or completing a task or duty. It’s about serving the public, serving the country, serving an entity that is more substantial than your life and yourself.”

Coming back to the U.S. on Aug. 29, Klein said re-entry was difficult, and the experience changed him in ways he couldn’t have anticipated.

“You’re in an active war zone where people are making decisions on whether to flee or to risk death, whether the Russians are going to bomb them or nuke them or use chemical warfare,” said Klein. “Then you get on a flight, fly 15 hours, and I’m back in my air-conditioned apartment with my dog. It’s going to be an adjustment.”

Yet Klein feels it was an essential experience.

“Life is about perspective, and you gain lenses by exposing yourself to things,” said Klein. “That’s why, in addition to wanting to help, I knew I needed to go.”

Fitsanakis is already using Klein’s example as a lesson in his Intel classes, and he hopes to bring Klein to speak at the Edwards Open House on Oct. 14, 2022.

“I am just immensely proud of him,” said Fitsanakis. “What better testament of somebody guided by the principle of giving back to our country, of giving to others, than Jonathan? His work basically encapsulates what we do, what we try to teach our students.”

Klein also emphasized, however, that American citizens don’t have to cross the world to play a significant role in humanitarian actions.

“I believe Americans are giving in nature, but people don’t know where to start, or they think their small donations don’t do anything, or that a small amount of time doesn’t create a big movement. That’s just not true. The small donations do snowball into initiatives being successful. I would just urge people to get involved in some way, even if it’s $5 or a few hours of time each month. You can effect change.  It’s within your reach.”