People of the Women's and Gender Studies Program

Find out more information about the experiences of our students, alumnae, and faculty

‌‌Dr. Ina Seethaler (pronouns she, her, hers) received her Ph.D. in English with a minor in Women's and Gender Studies from Saint Louis University. Before coming to Coastal she taught in Saint Louis University's Women's and Gender Studies Department for three years. Her research connects gender, migration, and literature. She has published, among other topics, on a fake mail-order bride website as feminist activism, undocumented migration and life writing, and feminist service learning. Ina recently finished a book manuscript on immigrant women's life writing, nationality, and social justice. She loves teaching courses on feminist activism and on gender and pop culture.

Hello Everyone! My name is Amanda Masterpaul and I am a Teaching Associate with the Theatre Department and the Women’s and Gender Studies program here at Coastal Carolina University. As my educational background, I received my Graduate Certificate in Women’s & Gender Studies and my Bachelor’s Degree in Theatre with an emphasis in Directing, from the University of South Carolina. When I was in the undergraduate program at USC, the shows that I was drawn to directing were written by women and stories showcasing the experiences of women. During my senior mastery program, I directed a show called “The Gut Girls” by Sarah Ruhl. This play exposes the struggles and challenges of working women in Victorian England within the gutting sheds of the cattle market. A soon-to-be Women’s & Gender Studies mentor of mine saw this show, came up to me afterwards and said, “You know what, I’ve come to a lot of plays that you’ve directed here on campus and . . . . you’re a feminist. Have you ever thought of getting your Masters in Women’s & Gender Studies.” This pivotal invitation became a merging point for me where social activism, theatrical expression and feminism could be integrated into my everyday work.

Currently, at CCU, I teach THEA 321, Applied Theatre and WGST 103, Introduction to Women’s & Gender Studies. I am inspired and privileged to teach these classes as they actively challenge and question the status quo and they encourage conversation and dialogue. My teaching style is highly participatory, creative, collaborative, and hopefully engaging enough to provide a comfortable classroom environment. A classroom where what we are learning becomes a mirror to how we choose to act within society. One of my other roles at CCU, is the creator and facilitator for the original Haven Live Theatrical production during Orientation week of the CINO Tie program. The goal of this program is to engage audience members as active participants in critical discussion and investigation of issues like consent, sexual assault, rape culture, sexual harassment and LGBTQ+ concerns on campus. Women’s and Gender Studies programming touches upon every area of discipline and merges what might seem as unrelated and makes it relatable and resonant across any spectrum of occupation. And without a doubt, I am proud to be a part of combining feminist education with theatrical storytelling to better serve our community. 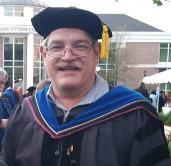 Robert (Bob) Jenkot earned his Ph.D. in Sociology from Southern Illinois University - Carbondale. He came to Coastal Carolina University in 2009 and has been the chair of the Sociology department since 2014. He has taught graduate and undergraduate courses in gender & sexuality, research methods, criminological theories, the history of crime, illicit drug and alcohol use/sales/manufacturing, organized crime, race and ethnic relations, and minorities & social justice. His primary interest is how race, class, gender, and ethnicity can affect a person’s offending behavior. In particular, how these factors influence a person’s illicit drug use, sales, and manufacturing. He is also interested in media constructions of crime, criminals, and how these categories interact with a person’s gender. He has conducted research regarding: historical aspects of organized crime, sexuality & gender, internet fraud/crime/cons, prisons, the civil rights movement, drug and alcohol use/abuse among college students, school shootings, and policies regarding carrying firearms on college campuses. 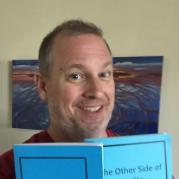 Kevin Ferguson (Lecturer) teaches “LGBTQA+ Theatre (and Movies)” as a VPA 103 Course, which is accepted in the Women’s and Gender Studies Major and Minor. In what he laughably calls his free time, he writes plays and is a playwright and dramaturg. Somebody somewhere thought his plays were okay, and he has been published and was awarded a SC Arts Commission Artist Fellowship in Theatre: Playwriting. Kevin teaches playwriting, screenwriting, and dramaturgy courses in the Theatre Department - so you, too, can learn to put the voices in your head down on paper if you'd like. He also created “Marvel Cinematic University and Star Wars: The Course Awakens” because he is a big gay nerd geek. He teaches the course as VPA credit with his patient friend and colleague Professor Penn. Kevin believes any course about people is a Women’s and Gender studies course – or it is leaving a big chunk out - because straight men are cool, but not the only ones who accomplish things! 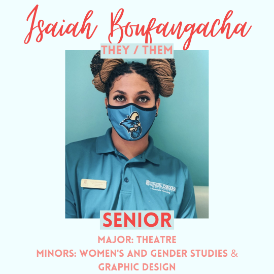 I became a Women’s and Gender Studies minor because I was in the process of discovering my own identity. Since I always questioned gender roles and society’s ideas about gender, adding this minor definitely gave me the answers I was looking for. I identify as non-binary, and I really enjoy taking these classes and viewing the world through an intersectional point of view. 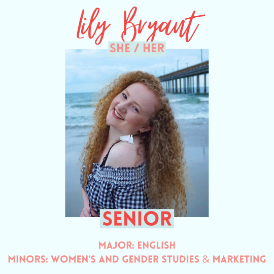 I decided to become a Women's and Gender Studies minor because after taking the introductory class, I realized that the minor filled in gaps left behind by my public education. All of the marginalized groups left out of history were discussed in these courses, and I learned a lot of truth that I believe I missed out on elsewhere. Women's and Gender Studies has also taught me ways to understand the different lived experiences of others and how my lived experience is unique. Sometimes our different identity markers privilege us, and sometimes they oppress us. It is important to understand that and use the ways in which we have privilege to help close the gap and create a better world for everyone. I am so glad that I decided to obtain this minor. It truly has helped me become a better and more understanding person. 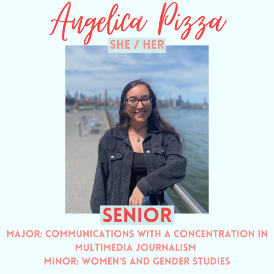 I decided to minor in Women’s and Gender Studies because it encapsulates the things I’m passionate about! As a woman, women’s issues are so important to me, and I wanted to learn more about how these issues affect myself and my loved ones. I also wanted to minor in WGS because I wanted to find other people who share the same values as me! I’m majoring in communication and journalism, so the minor is a great addition. My goal is to use writing as a form of activism in the future.

Becoming a part of the Women's and Gender Studies program and adding the minor was one of the best decisions that I have made in my college career. It is implied that, due to my activism as a Feminist, I believe in gender equality...yet my inspirations lie much deeper than that. One may ask..."Why?" Because I was lucky to be raised by a mother who is a strong woman and vigorously guided me to where I am at today as I prepare to graduate from college as a first- generation student. She is my rock through everything in life. "Why?" Because I am the proud brother of two amazing sisters who have gone on to lead families of their own in a similar manner. "Why?" Because I am the proud uncle of six beautiful girls who are all growing up so fast and taking their own paths in life to achieve their dreams. How could I truly love all the women in my family and not support their dreams and not believe in their capabilities solely because of their gender? I am who I am solely because of the women in my life.

I added this minor because I believe as a cis-gendered male, that it is my responsibility to utilize my privilege to advocate on behalf of all marginalized women regardless of their race, class, sexual orientation, religion, etc. I have taken a deep interest in gender and sexuality and aspire to work in the counseling field one day after I have earned my degrees. This program has equipped me with tools, terminology, and skills that have further enhanced my intellectual skills and will continue to provide for my future endeavors regardless of what I choose to pursue. I think it is important to note there aren’t any designed criteria for being a 'Feminist' or restrictions to joining our program. It just requires someone to take the initiative for the betterment of humanity and to believe that a more just society for all women is a just society for all human beings. I highly recommend all Coastal students to feel this similar obligation and encourage you to take the initiative. 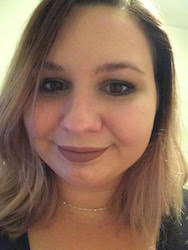 Hi! I’m Bethany Bebik, a proud CCU Alumna. I graduated from Coastal in May 2017 with a Public Health major and Women’s and Gender Studies minor.
Now that you know a little bit about me, I’d like to explain to you how the WGS minor and classes completely changed me.

When I first came to CCU, I had to go through that dreaded sexual assault awareness presentation. I didn’t completely understand the importance of the session; I thought it was ridiculous and a waste of my time. In this particular presentation, it was a group of people at a party and a girl was getting pretty drunk when one of the guys decided to take her to his room and assaulted her. Once it was time for Q&A, I spoke up and began saying things like, “why didn’t she just go home? She could have stopped drinking. She didn’t have to go with him.”

Looking back on that moment, I can’t help but feel awful for the students in the room who may have been assaulted. I made them feel like it was their fault, a feeling I’m sure they had been struggling with since the assault. I’m not completely sure when my thought process shifted, but I believe it happened when I took my first WGS class. In the class, we discussed gender differences, sexuality, the economy, and so much more. It was in that class that my fellow classmates began to open up about how they had been sexually harassed and assaulted, and I realized that they didn’t do anything to attract the offender – that rape happens because someone else wants to overpower the other person.

That class completely changed how I felt about sexual assault and rape; preventing sexual violence ultimately became a passion of mine. So much so, I became a volunteer at the Rape Crisis Center of Horry and Georgetown, answering crisis calls and responding to the hospital; I then worked as a Prevention Educator, and now I am moving to Raleigh, NC to work as a Sexual Assault Case Manager.

I urge you to research a topic or take a class that may challenge the way you think (bonus points if it’s a WGS class!). It will make you more open to change, ideas, and you will learn more about yourself than you think.