Kristin Bohan, Ph.D. is a psychologist with more than a decade of experience working with adolescent girls and women of all ages with eating disorders, body-image issues, anxiety and depression. She is also the founder of the Coastal Montessori Charter School in Pawleys Island, S.C., which opened in August 2012. The school’s mission is to produce highly-educated, self-directed, socially-responsible citizens who work collaboratively, respectfully and peacefully as individual yet interdependent learners in a diverse and nurturing community. After writing the charter, Bohan worked with the U.S. Department of Agriculture to secure a $6.6 million facilities loan. The school purchased property and built a 25,000-square-foot building specially designed to feel more like a home. More than 200 children moved into their new school home in November 2016. With a uniquely strong working relationship with its sponsoring school district, CMCS has been called a model for other public charter schools by Gov. Nikki Haley.

Bohan also is an active volunteer at Lowcountry Preparatory School. She previously started a nonprofit organization called “my TERMS,” through which she transformed her clinical practice into a prevention program that reached out to girls age 8-16 to teach them how girlhood is poorly portrayed in popular culture by marketers, merchandisers and the mass media, and more importantly, how many other choices and perspectives are available to them. Girls learned to be more savvy consumers of the media and about successful girls in history – all in a supportive and safe environment. They discovered social activism and ways to challenge negative stereotypes in their own communities.

Bohan earned her bachelor’s and master’s degrees in psychology from Marist College and a Ph.D. in psychology with a concentration in higher education administration from the University of Tennessee, Knoxville. She attended Duke University’s Professional Psychology Internship program and completed a postdoctoral fellowship at the Yale Center for Eating and Weight Disorders.

She lives in Pawleys Island with her husband, Dr. Michael Bohan, and their two children. Lou Kennedy is president, CEO and owner of Nephron Pharmaceuticals Corporation. She joined Nephron in 2001 and accepted the position of president and CEO in September 2007. One of her notable achievements at Nephron was creating a national sales force, a rarity in the pharmaceutical industry. In the years following, this helped Nephron grow by 300 percent and increase shipped product to one billion doses each of the last six years. Kennedy also was at the forefront of Nephron’s recent expansion, which included the opening of a state-of-the-art manufacturing facility in West Columbia, S.C., in June 2014.

With her husband Bill, Kennedy helped establish the Kennedy Pharmacy Innovation Center in conjunction with the University of South Carolina College of Pharmacy. She serves on a variety of business and civic boards, including the South Carolina Chamber of Commerce, the National Bank of South Carolina board (a division of Synovus), Columbia College board of trustees, South Carolina Manufacturers Alliance as well as the USC athletic department board. Lou and Bill Kennedy were named Ambassadors of the Year by the Greater Columbia Chamber of Commerce in 2013. They also received the Lexington County Ambassador for Economic Development Award in 2014.

She earned a bachelor's degree from the University of South Carolina's School of Journalism and Mass Communications. 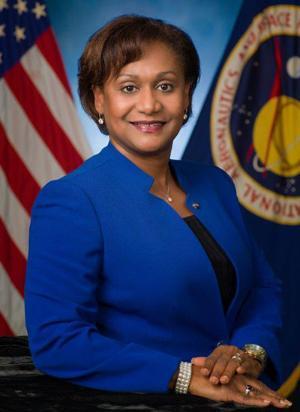 Vanessa E. Wyche is director of the Exploration Integration and Science Directorate (EISD) at NASA's Johnson Space Center where she provides executive guidance and direction of a multi-disciplined organization of 400 civil servants and contractors to enable human and robotic exploration, with plans for missions in the lunar vicinity to explore an asteroid and develop capabilities to lead to human missions to Mars. Her organization includes exploration systems engineering and integration, mission concept and architecture development, physical science research, orbital debris and image science research and operations, and applied-science mission support. EISD also provides for curation of all NASA-held extraterrestrial samples, Extra-vehicular Activity (EVA) "space-walks" Program management, and the development of strategic partnerships benefiting the Johnson Space Center (JSC).

Wyche previously served as assistant director of JSC where she assisted center leadership with policy development, staff relations, strategic planning, and management integration of technical, mission support and communications activities for the organization of approximately 3,000 civil servants and 8,500 contractors.

Before joining NASA in 1989, she worked for the Food and Drug Administration (FDA) in Washington D.C. Over the span of her career with NASA, she has held several key leadership positions across several NASA enterprises, including in the Space Shuttle Program as a flight manager.

In recognition of her management, leadership and innovations, she has received numerous honors, notably, a NASA Outstanding Leadership Medal, two NASA Achievement Medals, a JSC Innovation Award, 2014 Women@NASA awardee, and a national 2016 Women Worth Watching honoree by Profiles in Diversity Journal.

As a strong supporter of leading edge technologies and diversity, she is a member of JSC's Innovation and Inclusion Council and Co-Executive sponsor of "Emerge" a JSC Employee Resource Group for early career employees. She also advocates mentoring and is a passionate promoter of STEM in her community, including leading efforts to oversee an annual science fair at an underserved elementary school. She is a member or Links, Incorporated, Port City Chapter, Delta Sigma Theta Sorority, Houston Alumnae Chapter, Jack and Jill of America, Houston Chapter Associates, and National Society of Black Engineers, serving as an executive sponsor of the JSC Chapter.

She is a member of Brentwood Baptist Church where she is active in the Deacons' Wives ministry, having served in various leadership roles over several years. She especially enjoys working in the Fig Leaves ministry providing clothing to those in need. She also serves Brentwood's Boy Scout Troop 500 as Life-to-Eagle Scout coordinator where she has coached/mentored over 10 young men in accomplishing their Eagle Scout rank.