After graduating from CCU in 1998 with a degree in computer science and a minor in math, Chad Casselman earned his master’s degree at N.C. State in 2000 and worked as a software consultant before returning to teach at CCU six years ago. His “side” businesses are the source of his financial success, however. When he was still an undergraduate, he started Casselware, a software development company. In November 2011, he and two partners founded JVZoo, an online marketplace for sellers of information products, and the company has become highly profitable.

Originally from Lake Wylie, S.C., Patrick Doring’s experience at Coastal probably could not have been much better. He studied hard when it was appropriate, but he also had fun. He balanced his job working at Kimbel Library with plenty of surfing and socializing. When Doring received his degree in computer science in 2011, he had completed a well-rounded experience, one that would take him to the headquarters of one of the most well-known companies in the world.

Sunny Gupta, a native of Chandigarh, India, earned a bachelor's degree in computer science and a minor in mathematics in three years from Coastal Carolina University. As a student, he was an intern in the Chancellor's Office, a resident adviser, and the president of the International Club. He also worked in the computer science lab. Today, Gupta is the cofounder and CEO of Apptio, one of the fastest growing software as a service (SaaS) companies. Gupta was named the College of Science's 2008 Outstanding Alumnus of the Year. He and his wife, Prena, previously established the Sunny and Prena Gupta Jamboree Alumni Scholarship at CCU.

Ryan Rossi, from Pawleys Island, earned a degree in computer science. He was undergraduate student research fellow with NASA and conducted research at the NASA jet propulsion laboratory in Pasadena, Calif. He earned a Ph.D. from Purdue University and is currently a senior research scientist at Adobe Research. 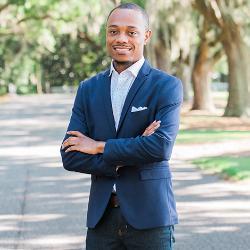 Ronald Harrison graduated from Coastal Carolina University in 2016 with a Bachelor of Science in information systems and minor in business administration. After graduation, he accepted a job in the SC Attorney General’s Office as an IT technician and later worked at a law firm, also in IT. He completed CCU's Master of Science in information systems technology in 2019. Harrison works with AIG, where he is and internal IT auditor for General Insurance.

Harrison said he entered the the MSIST program at Coastal because the program focused on two things: security and data analytics. The program allowed him to take all of his courses online without having to come to the campus for any reason, which was necessary because he worked full time and did not live in the area.

The program was a great experience for me, I was able to have a happy balance between school, work...without being overwhelmed. It allowed me to work at my own pace but I realized I would have to utilize my skills of time management and be proactive to get the work completed. This program is great for people working full-time careers who want to obtain their master’s degree. Sean Lynn is currently the GIS senior project manager with the Washington College GIS Program. Lynn is a Coastal Carolina University graduate earning a Bachelor of Science in computer science in 2013 and an MBA in 2014.

Lynn has been studying traffic safety and GIS for over four years working closely with Maryland Department of Transportation Motor Vehicle Administration Maryland Highway Safety Office (MDOT) and local, county and state law enforcement to provide statistical and geo-spatial analysis, maps, and training in efforts to reduce fatalities and crashes on Maryland roadways. One of Lynn’s major accomplishments working with MDOT is the development of the Risk Analysis of Vehicle Environmental Network or RAVEN. The web application provides user access to crash data in multiple GIS formats. This web application is used by over 900 traffic safety professionals throughout Maryland. Lynn is also chair of the Maryland Traffic Records Coordinating Committee, Maryland State Geographic Information Committee and Delmarva GIS Conference.

In 2020, Lynn plans to begin a doctoral program in business administration. 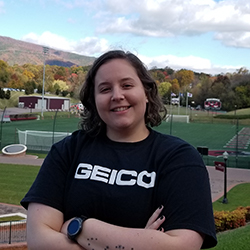 Hailey Crouse graduated from Coastal Carolina University in 2017 with a Bachelor of Science in computer science and a minor in applied mathematics. After graduation, she accepted a job at Geico as a software engineer. While a student at Coastal Carolina University, Crouse worked with department chair Jean French on a research project focused on early intervention for introducting computing sciences concepts to pre-K girls.

Coastal really brought me out of my shell...which has really helped me in my job. I joined a number of committees at work and am really involved with extra activities. It definitely helped me for my interview. The part of my education directly related to my job are the courses Software Engineering I and II.