Go Where the Action Is

Sixty people are gathered in an outdoor park in Asheville, N.C., to enjoy a performance. On a blue tarp, two men in t-shirts and jeans sit on the ground in the shade of a tree, surrounded by wires and a sound machine. The composer, after donning headphones, starts flipping switches and moving wires, and the electronic music begins: bass line, synthesized percussion, melody. This is Modular on the Spot. 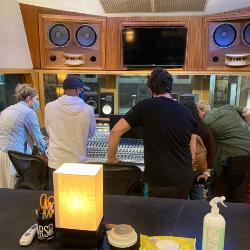 The combination concert series and synthesizer enthusiast meetup is only one of numerous experiences students in CCU’s Masters in Music Technology (MTM) appreciated during a late September 2021 visit to Asheville. The excursion, which included seven students and faculty lead Tim Fischer, associate professor in the Department of Music, allowed students to see, hear, and feel both the origins and the impact of electronic music outside the classroom.

A course in media composition and synthesis – which, in music, refers to the study of sounds design – was the catalyst for the trip, said Fischer. Taught within the four-year-old program’s two-year curriculum, the course was offered just once before, prior to Covid, and this recent jaunt continued the tradition of offering students authentic experiences to complement their classroom learning. The students also visited the Moogseum, a museum operated by Michelle Moog-Koussa, daughter of Moog founder Bob Moog. The students’ experiences were particularly relevant since CCU owns several Moog synthesizers and students have learned on them within the program. 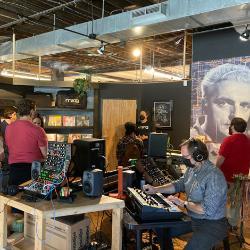 “On both trips, we’ve brought the students up and they tour the factory, talk to representatives from the company, and learn about the instruments and their history,” said Fischer. “At the Moogseum, there’s a lot of interaction; students are playing the instruments

and talking to the docents, so it’s really neat for these students who have been learning on these instruments to go and see where they’re made.”

A recording studio tour was also on the agenda, since recording is a central element of the MTM program, as representatives at Echo Mountain not only fielded questions about the industry but also offered advice about launching a career.

Fischer anticipates this biannual field trip will not only heighten student interest in the possibilities within the electronic music field, but also lead to internships and job leads.Students this year toured the artist-in-residence facility at the Moog recording studio and met with the founder of Voltage Flow Residency. Voltage Flow identifies promising young artists, builds them a customized modular synthesizer, trains them on how to use it, and allows them to record their original compositions on it.

“We spent some time with him and he built an instrument for us, explained how to use it, and let the students play it,” said Fischer.

The personalized exposure to the industry allows students to understand the scope of the field in a way that’s not possible in the Conway, S.C., area, where it’s more of a niche, said Fischer. Modular on the Spot, for example, was established in Los Angeles in 2014 and is now a monthly, free event that occurs in more than 20 cities around the globe.

“Students were surprised at how many people were passionate and active in the electronic music industry in this area,” said Fischer. When they returned to campus, one student asked Fischer if they could host their own Modular on the Spot event on the CCU campus. The plans are in early stages of discussion.

“it’s really great that they can bring that passion back from what they saw,” said Fischer, “and realize that they can be part of this community now, too.”