On the job: CCU communication majors in action

What happens when you take a CCU communication major out of the classroom and into the field? They put their skills and knowledge to work, whether it’s in the news room, on the ball field, or in a recording studio. The cool thing is, the general public can often participate by tuning in or logging on to experience these interns doing their stuff.

Students pursuing a B.A. in communication, one of the largest majors within the Edwards College, select from five concentrations, many of which require an internship. In summer 2021, numerous students in the sports communication concentration found gigs at sports facilities around the state, while others landed at news outlets in other parts of the country. One particularly ambitious student took a direct route, securing an internship for his interactive journalism concentration for fall 2021 by personally making it happen. We caught up with several of these students to learn how their internships benefitted them, how they applied material learned in the classroom, and how their experience may impact their future careers. 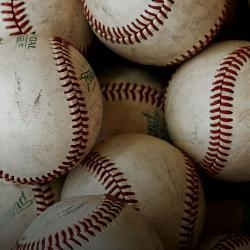 Senior Trevor D’Meo enhanced his study of sports communication by interning at The Ripken Experience in Myrtle Beach, which brings 60 teams of youth baseball players per week throughout the summer to the facility for a weeklong tournament. D’Meo, who was part of a team of 40 interns from universities throughout the East coast, spent the majority of his time as a tournament operator, meaning he covered many roles to make the tournament organized and fun: announcing players’ names and playing their “walk-up” music as they hit the field; operating mid-inning games and contests; and reading advertisements or trivia questions.

“My biggest victories were times when fans would really interact with me on the mic."

“My biggest victories were times when fans would really interact with me on the mic,” says D’Meo. “On my best day, I had almost 10 kids in my press box announcing names and interrogating me on why I did certain things during games. Also, I got to play baseball with the kids during skills competitions after opening ceremonies, so that was a bonus.”

D’Meo valued the chance to ensure that the players had a great time during their experience.

“As a kid, I never had a week-long trip of baseball like this, so I wanted to make it the best for the kids doing it now,” D’Meo says. 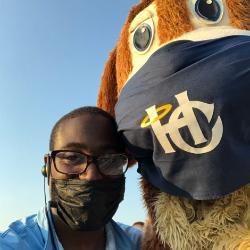 Tyuan Scott: Mingling with the mascot

As part of a 12-person team with the Charleston Riverdogs minor league baseball team, Tyuan Scott, like D’Meo, was focused on making the baseball experience fun for the fans and making sure operations went smoothly. The internship was Scott’s first job, so all aspects were new for this senior communication major with a concentration in sports marketing.

Customer service, for an intern at a minor league ball club, covers a lot of ground. Scott sold tickets, directed traffic, interacted with fans, and maneuvered the mascot, Charlie, as he posed and took photos with fans. The biggest downfall? Toilet paper night.

“During toilet paper night, fans were allowed to throw toilet paper onto the field after the game,” says Scott. “It took my co-workers and I nearly two hours to clean up all of the toilet paper once that portion of the night was over. We all agreed we hope we never have to do that again.”

While Scott’s ultimate career goal is to become a sports analyst, he believes the internship was a beneficial opportunity on his way there.

“I knew that I needed this experience to help me prepare for my dream job."

“I knew that I needed this experience to help me prepare for my dream job. I learned that you have to be vocal, both in this internship and in becoming a sports analyst, so it’s important for me to learn how to talk to people and help people out,” Scott says. Through a bit of networking, senior Max Lawson secured an internship with Sports Radio 810 WHB-AM, which is paired with sister station ESPN Kansas City 1510 AM. His beat was all things Kansas City sports, including the Kansas City Royals, Kansas City Chiefs, and Sporting Kansas City (MLS). After a few weeks of shadowing newscasters on the morning show, Lowson was let loose to write news stories.

“I wrote 2-3 articles a week on the Kansas City Royals,” says Lowson, who also hosts a weekly show on CCU’s WCCU Radio. “If they’d played a game the night before, I’d do a recap, mixing my own perspective in there, and then a takeaway from it.”

Lowson’s work often landed on the Sports Radio WHB-AM website. “It was pretty cool; to know that thousands of people go to that site every day, and then for me to go in and to see my headline and my byline on the lead story – it was pretty surreal.”

Another highlight occurred during Lowson’s final week of the internship, when he hosted his own show on ESPN Kansas City 1510 AM on two different days. “They were both in drive time, 4-6 p.m. and 5-6 p.m.,” says Lowson. “I was nervous. The school radio station is great, but it’s not broadcasted to thousands of people within a 300-mile radius. It was difficult to go two hours without any call-ins, but it was great.”

Lowson credits the course Jour 489: Radio News and Sports Reporting, which he took under Kimberly Schumacher, senior lecturer in the Department of Communication, Media, and Culture, with giving him voice training and skills. “In that class, we created reporter wraps using Adobe Audition. The assignment would give you the text and a tone to say it in, and I was able to practice using different versions of my voice,” says Lowson. “That helped me refine my voice when I was doing a radio show or interviewing people about a sport or a team.”

Lowson continues his craft with radio exposure back at WCCU. Tune in to SportsMax, Monday-Friday 4-5 p.m., to hear more from this up-and-coming broadcast journalist. 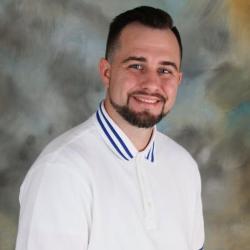 Jacob “Jacob the Intern” Clemens: the right place at the right time

Junior Jacob Clemens, 32, thought he might as well get his career started as soon as possible. After graduating from Horry-Georgetown Technical College with an associate’s degree, he enrolled at CCU in fall 2021 as a communications major with a concentration in interactive journalism. Before the second week of classes was over, Clemens had found himself an internship broadcasting on live, local radio WTKN radioTALK 94.5, with Liz Calloway and Nick Summers, morning drive 6-10 a.m. on Tuesdays and Thursdays, as “Jacob the Intern.”

“I’m almost doing things backward,” says Clemens. “Most students learn in the classroom and then apply those skills later in an internship. But I’m learning on the job, in the field. I’ll see things in class and say, ‘Oh yeah, we did this the other day.’”

Clemens grabbed his opportunity by attending a live event at the Asher Theatre in Myrtle Beach featuring Liz Calloway, in August 2021. He was a fan of her show and hoped to have a chance to meet her, but he never would have thought that, after a few minutes of chatting, she’d offer Clemens an internship.

“I thought I might occasionally get on the air, but they gave me a microphone and headphones the first day,” says Clemens.

Then, once he arrived at the studio for his first day, the surprises kept coming. “I thought I might occasionally get on the air, but they gave me a microphone and headphones the first day,” says Clemens.

The intern’s trial-by-fire method has worked out well, though he’s had moments of doubt. “The first couple of weeks, they’d catch me off guard all the time,” said Clemens. “I’d leave for the day and think, ‘Why did I say that? Why didn’t I say this?’ I’ve learned how to think faster and respond better, though I’m still learning.”

To join these broadcasters-in-training, tune in to WCCU Monday-Friday 4-5 p.m. for a dose of CCU athletics with SportsMax, or, if you find yourself interested in some talk radio on your morning commute, punch in 94.5 FM on your dial to hear “Jacob the Intern."