Spending the summer experiencing a Japanese Buddhist pilgrimage may be enough — or even a bit much — adventure for most college students. However, one group of CCU undergraduates not only transformed into pilgrims for a few weeks in Summer 2019, but also worked to bring that experience home and recreate it for others.

Susan Bergeron, associate professor in the Department of Anthropology and Geography, and Ron Green, associate professor in the Department of Philosophy and Religious Studies, led an interdisciplinary group of six students on a mission to the island of Shikoku, Japan, to conduct field work on the Shikoku Pilgrimage, a series of 88 temples dedicated to the Buddhist monk Kukai. In addition to immersing themselves in the history, culture, and archaeology of the mountainous island, the group embarked on a project to create a three-dimensional virtual heritage landscape platform of the pilgrimage.

The project took shape when Bergeron and Green, having over several years discovered a shared interest in digital technology and Japanese Buddhism, applied for and won a 2019 ASIANetwork Freeman Student-Faculty Fellows Program grant, which covered costs of the excursion and was the largest grant awarded by the international organization that year. Trip organization occurred fairly quickly, though Bergeron and Green were particular about the type of students they chose: They desired a specific combination of backgrounds in digital technology, history, anthropology, and philosophy. The lineup included digital culture and design majors Wyatt Beard, Kasey Charette, Shonte Clement, and Luke Rutherford; anthropology and geography major Jacob Brine; and English major Varick Clayton.

In true team fashion, each student brought different skills to the table and had individual roles and goals on the trip.

“I wanted students who had both knowledge and interest,” said Bergeron. “I had people I knew had skill sets who could get up to speed quickly. No one person has the skills to do everything in our project, so we planned the group carefully.”
- Brine (’19), anthropology and geology major, said his interest in Buddhism drew him to the journey.

“I thought I had a basic understanding of Buddhism, but I’d never had a lived experience of it,” said Brine. “I wanted to see it performed by people, especially today. Their relationship to those sacred spaces and the feeling that came over me is how interwoven the rural spaces are when you’re walking to the temple itself – the fact that we were functioning together as this human experience was just so fantastic.”

Green, who had visited the pilgrimage multiple times before and studied Shingon Buddhism for a decade, said the experience leaves a permanent mark on travelers.

“Regardless of whether you have an intention to do a spiritual or religious practice, something happens to your view of the world,” said Green. “Just doing the hike, visiting these places, tracking with other people, I think – the Shikoku people say it opens your heart.”

Kukai (774-835) was a renowned Japanese monk and a native of Shikoku who established the Esoteric Shingon School of Buddhism. Shikoku literally means “four provinces,” and the pilgrimage spans the areas of Awa, Tosa, Iyo, and Sanuki, leading through mountainous and rural regions as well as urban sites. The journey is analogous to a path to enlightenment, with progressive sections of temples representing periods of awakening, austerity and discipline, attaining enlightenment, and entering nirvana.

As henro (pilgrims), the group members wore the traditional costume — which includes a white robe, conical hat, and kongo-zue (walking stick) — in addition to carrying equipment and participating in rituals at each temple. Their clothing identified them as pilgrims to others on the trail and in the villages, which allowed for another dimension of interaction.

“When we put on the white robes, we’re giving up our ego, following in footsteps, and accepting that we’re like Kukai,” said Green. “The robe has writing that says, ‘Two people, the same practice.’ So we are embodiments of Kukai. When people would give us a drink on the road, or a little gift, it was giving alms. They’re actually building merit for a future rebirth.”

In addition to the pilgrimage site, the grant provided for the group to travel to other cultural heritage sites around Japan, including the imperial palace in Tokyo, Kukai’s original monastery in Kyoto, and Hiroshima to enhance the students’ immersion in Asian culture and history.

The next step of the project — taking that experience and re-creating it through a virtual heritage landscape platform — began in August and will span years, hopefully involving additional visits to the site. Bergeron led a research project in Fall 2019 to create a prototype, which involves three of the 88 temples and involves movement, text, audio, and virtual recreation of the landscapes in 3D models.

“As a user walks through the virtual temple space, they can walk up to certain locations and media will pop up,” said Bergeron. “The individual media elements will combine with immersive exploration where you discover things as you move through the temple compounds. So it combines a little bit of video game technology and some elements distilled from platforms like Google Earth.”

The group will present the first stage of the project at the ASIANetwork annual conference in April 2021. In its final form, the project will be accessible on mobile and digital platforms including computers and cellphones.

Shonte Clement, digital culture and design student who graduated in December 2019, said the trip made a fundamental difference in her world view.

“To be completely immersed in a culture that has a different setup, to put yourself in a different context without speaking the language, it was really extraordinary. The air felt different. It made me think differently about America and even myself in the world.”

The Future is First-Gen 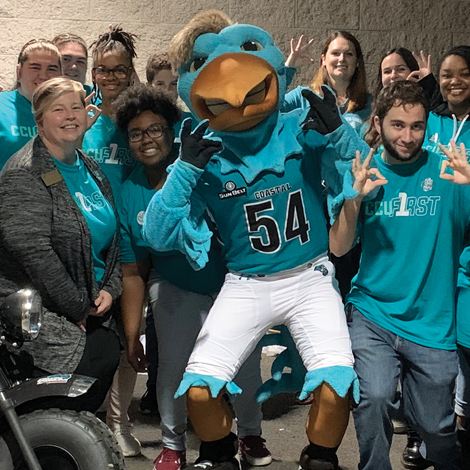 Blueprint for a Diplomat 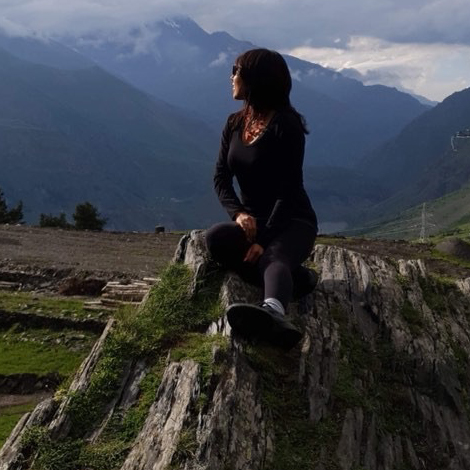