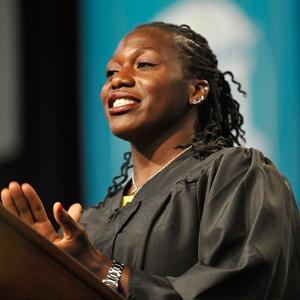 In her remarks to Coastal Carolina University’s Class of 2017, commencement speaker Amber J. Campbell encouraged graduates to be true to themselves and their own course in life instead of relying too much on conventional wisdom.

“Don’t listen to ‘they,’ because ‘they’ will tell you all kinds of things,” said Campbell, an Olympic athlete and 2004 CCU graduate. “ ‘They’ don’t always have your best interests at heart. ‘They’ will try to talk you out of your dream. ‘They’ will tell you that what you’re pursuing doesn’t make sense or that the career you chose is too obscure… Meanwhile, you might end up a three-time Olympian and travel the world!

“Failure is not always a bad thing. Failure is only true failure if you don’t continue to try again. You can literally fail your way up to your biggest success. Don’t let ‘they’ determine your course of action. Listen to that little small voice that the creator put inside all of us that speaks to the positivity and the greatness of each one of you.”

Campbell is one of the best women’s hammer throwers in the world. She has won 11 national championships, and she is a two-time Pan American Games Medalist. She owns the Olympic Trials and American Olympic record. She has represented Team USA at five World Championships (2005, 2009, 2011, 2013, 2015) and is a three-time Olympian (2008, 2012, 2016). Her mark and placing at the Rio Olympics in 2016 was the best ever by an American woman. Campbell finished with a throw of 72.74 meters—just two meters away from the bronze medal. She threw her personal best—74.03 meters—at the Olympic Trials in Eugene, Ore., in June 2016.

Originally from Indianapolis, Ind. Campbell earned a bachelor’s degree in psychology from CCU. One of the most distinguished student-athletes in CCU history, she was a five-time NCAA All-American, 16-time conference champion and three-time Big South Athlete of the Year. She lives in Myrtle Beach and continues to serve CCU as a volunteer assistant coach for throwers. Campbell was inducted into CCU’s George F. “Buddy” Sasser Hall of Fame in 2009 and the Big South Conference Hall of Fame in 2016.

Campbell was presented the honorary degree, Doctor of Science at Coastal Carolina University, during the spring commencement of 2017. In 2018 she was honored as an "Inspiring Woman" by CCU's Women in Philanthropy and Leadership during the organization's annual Women's Leadership Conference and Celebration of Inspiring Women.