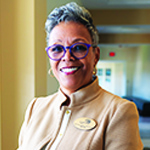 Barbara Jo Blain-Bellamy recognized at an early age that her life's work is to serve others. She was sworn in as mayor of Conway on Jan. 4, 2016, having previously served on City Council from 1993-1998 and 2012-2016, and a mayor pro tempore in 1996 and 2015. She also served four years as Conway's assistant city administrator. In January 2011, she founded Community Legal Services, a private law office providing legal services to low-and-moderate-income families.

Blain-Bellamy is chair of the board of directors of the PALM Chapter School, an executive board member of the Myrtle Beach Regional Economic Development Corporation, and secretary of the board of directors for the Waccamaw Council of Governments. She is the 2011 recipients of Leadership Grand Strand's Ann Debock Leadership Award, the 2010 Girl Scouts of Eastern South Carolina's Mary Brewer Women of Distinction Award, the 2009 Omega Psi Phi Community Service Award, and the 2009 NAACP Leadership Award. Blain-Bellamy is a graduate of the inaugural Waccamaw Class of American Leadership Forum, Leadership South Carolina, Leadership Grand Strand and the Municipal Elected Officials Institute of Government.

Blain-Bellamy earned an associate degree from Coastal Carolina University in 1972 when Coastal was a two-year institution affiliated with the University of South Carolina. She earned a bachelor's degree in education and a master's degree in psychology from USC. After earning a Juris Doctorate from the USC School of Law in December 2000, she was sworn into the South Carolina Bar Association in May 2001. Through substitute-parenting and step-parenting, Blain-Bellamy is the mother of seven and grandmother of five. She and her husband Bobby Bellamy are active members of the Friendship Baptist Church.

Blain-Bellamy was awarded the honorary degree Doctor of Public Service from Coastal Carolina University during the December 2018 commencement ceremony.