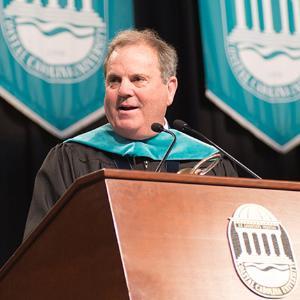 He has led a distinguished career in public service in addition to successful business pursuits in the Grand Strand area. Alford has served as chair of the S.C. Highway Commission and the Grand Strand Regional Medical Center Board of Trustees. He is vice president of A&I Fire and Water Restoration Company, a company he co-founded in 1974 while he was a student at Coastal Carolina.

In 2001 Alford received the Wall College of Business Administration's Jason Ammons Free Enterprise Award, which recognizes individuals whose careers have combined entrepreneurial excellence and responsible citizenship. The award was created by the family of the late Jason Ammons, a Myrtle Beach businessman. Past recipients of the award include Cecil Brandon, Clay Brittain, Jr., Hugh M. Chapman and Gary Schaal.

In 2001, he was awarded the Order of the Palmetto, the state's highest civilian award, for his lifetime achievements and service to South Carolina.

The ballroom in Atheneum Hall was named the William H. Alford Ballroom in 2015 after his desire to secure a dedicated home for alumni on campus.

Alford was awarded the honorary degree Doctor of Public Service from Coastal Carolina University during the May 2017 Commencement Ceremony.