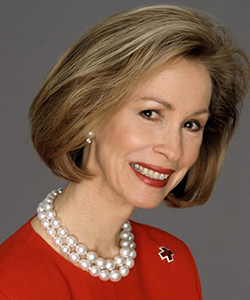 Bonnie McElveen-Hunter, president and CEO of the American Red Cross, is the first woman to be selected as chairman in the Red Cross' 126-year history. She has led a multifaceted career at the highest levels of public service, international diplomacy and communications.

From 2001 to 2003, she served as the United States ambassador to the Republic of Finland. She is also the founder and CEO of Pace Communications, the nation's largest custom publishing company, ranked by Working Woman Magazine as one of the top 175 women-owned businesses.

As a longtime philanthropist and charitable-cause activist, she has also served as a member of the international board of directors of Habitat for Humanity, chaired the Alexis de Tocqueville Society and served on the United Way of America board as a member of its National Leadership Council. She is a founder of the United Way Billion Dollar National Women's Leadership Initiative. She is the recipient of numerous awards, including the Ellis Island Medal of Honor, an honorary Doctor of Humane Letters from North Carolina State University and the Appeal of Conscience Public Service Award.

McElveen-Hunter urged the class of 2010 to be passionate about their career choices and leave the world a better place. "The people who make a difference in this world are not the ones with the most credentials or the most money or the most fame," she said. "They are those who put caring into action."

McElveen-Hunter was awarded the honorary degree Doctor of Public Service from Coastal Carolina University during the commencement ceremony.