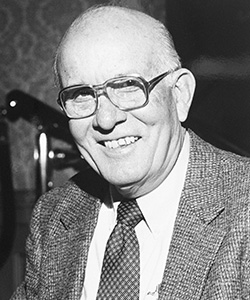 Dr. R. Cathcart Smith (1914-2001) was one of the most highly respected physicians in the Grand Strand region. For most of his long and distinguished career, however, he practically had a parallel profession, a volunteer vocation that, in many ways, rendered as great a service to his community as his medical practice did.

From 1954 until the end of his life, Dr. Smith devoted himself to higher education in Horry County and South Carolina. As one of the original founders of Coastal Carolina University and the first chairman of the Coastal Educational Foundation, he was instrumental in guiding the fortunes of Coastal Carolina University from its fragile first years through the institution's independence in 1993 and beyond. He was a member of the Horry County Higher Education Commission from 1971 to 1978 and served a chairman from 1972 to 1978. In 1993, Dr. Smith was appointed by former Governor Carroll D. Campbell Jr., to serve as a member of the first board of trustees for Coastal Carolina University, a position he held until March 1995.

‌When asked why he sacrificed so much of his precious personal time to the cause of education, Dr. Smith usually gave two reasons. He said he always felt the imperfect early education he received growing up in a small South Carolina town put him at a disadvantage in college and medical school, and he resolved to do what he could to improve educational opportunities in the state; and his wife, Nancy, a Phi Beta Kappa graduate of Duke University, was equally committed to education. For more than 40 years, they were active in the life of the University and were often seen on campus.

Dr. Smith was recognized as an original founder of Coastal Carolina University during the institution's first Founders Day celebration, held March 16, 1987. Nancy Smith (1918-2002) was posthumously named an honorary founder of the University in 2011.

The R. Cathcart Smith Science Center was named and dedicated on April 17, 1998. The Nancy Arthur Smith Distinguished Visitors-in-Residence series was established in August 2004 to bring noted artists and scholars to support campus residencies for artists and intellectuals who have distinguished careers in the arts, history, archaeology, international affairs or philosophy. Also in 2004, the Smiths were recognized as part of the Atheneum Society for lifetime giving to the University.

Born and raised in Mullins, S.C. Dr. Smith received a bachelor's degree from The Citadel in 1935 and earned his medical degree from Duke University in 1939. From 1939 to 1941, he was an intern and served his residency at Baltimore City Hospitals and was an assistant in medicine at John Hopkins University. He was a member of the United States Army Medical Corps from 1941 to 1945 and held the rank first lieutenant major. In 1945 he returned to the Duke University School of Medicine, where he was an instructor and fellow.

In 1947 returned to South Carolina to practice medicine at Conway Hospital, where also served as chief of staff and a member of the board of trustees prior to his retirement in 1985. The same year, Dr. Smith opened Baskervill Medical Clinic in Pawleys Island to provide a free medical clinic for the poor of the Waccamaw Neck area.

In 1978, Dr. Smith received the Order of the Palmetto, which was established in 1970 as the state's highest civilian honor for distinguished service. Locally, he was the recipient of the Outstanding Citizen Award from the Conway American Legion in 1983 and was the Field and Herald Man of the Year in 1973.

Dr. Smith was awarded the honorary degree Doctor of Public Service from Coastal Carolina University during the May 1995 commencement ceremony, which marked the first occasion the University awarded honorary degrees following its independence in 1993.